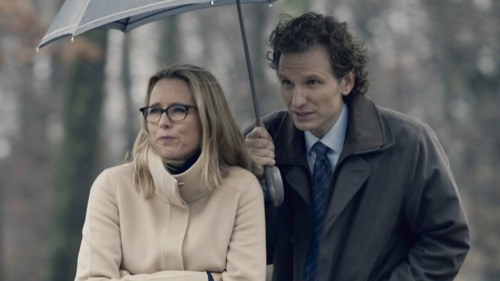 Tonight on CBS Madam Secretary airs with an all new Sunday, January 29, 2017, season 3 episode 13 called, 9“The Detour” and we have your Madam Secretary recap below. On tonight’s Madam Secretary episode, as per the CBS synopsis, “The murder of a rabbi who was organizing a symbolic Iran/Israel soccer game puts Elizabeth (Tea Leoni) and Jay’s peace treaty for the two countries at risk; at the same time, Elizabeth is getting buzz as a Nobel Peace Prize contender; work is taking a toll on Jay’s marriage; and Daisy makes a connection with a new work colleague.”

Tonight’s episode of Madam Secretary kicks off with Henry up bright and early in the morning, returning home from a jog. He’s excited and wakes Elizabeth up with a copy of News Source Magazine – she made the front cover and they did a huge article about her peace talks between Iran and Israel, and they announced that she is being considered for the Nobel Peace Prize. Elizabeth whines about how air-brushed her photo is.

Henry heads to the FBI headquarters where they are working on the case against the old militia that Henry helped take down years ago. They think that the militia may have sold a bomb to the terrorists. They are trying to get an inside man in the militia, the FBI wants Henry to work with Ian Conroy to brief him on everything he needs to know.

Elizabeth arrives at the office and is briefed by Nadine and Blake on the seating chart for Camp David. Jay is freaking out because the table is supposed to be oval, not rectangular. Elizabeth has been working around the clock making sure that the new peace treaty is signed by everyone. Daisy rushes in to apologize to Elizabeth about the cover of the magazine and the photo-shopping. Apparently, everyone on Twitter is calling her “Madame Sexy-tary” now.

Jay is frazzled and his wife has to drop off a file that he left at home. It’s obvious their relationship is strained and he hasn’t got to spend any time with his family while working on the camp David deal. After his wife leaves, Jay gets irritated in the break room because Daisy is flirting with a guy named Kevin from a different department – apparently she gave him floor access just to have coffee with him in the break room.

Elizabeth and her team head to Camp David, President Shiraz arrives early and is waiting for Iran to arrive. Little does Elizabeth know, there is a problem, Iran is not happy with the treaty and arguing with the wording of it with Jay. Elizabeth manages to stall everyone and convince them to retire to their cabins for the afternoon.

Elizabeth and Jay get bad news at camp David. Rabbi Lowenthal has been helping Elizabeth with the peace deal between Iran and Israel, he was just bombed during a rally in Israel, and he’s dead, along with 22 demonstrators and members of a camera crew. This is going to make the peace treaty even more difficult than they imagined. No one has taken responsibility for the bombing yet, but they suspect it is Hezbollah.

Elizabeth can feel the treaty sleeping away. She rushes to try and talk some sense in to the leader from Iran. But, he isn’t willing to budge on any of the disagreements, and informs Elizabeth that it is time to accept the fact that neither Israel or Iran is ready for a treaty.

Henry meets with Ian and tries to give him a lesson in the Covenant of John ideologies. But, Ian isn’t the greatest student, he’s not too interested in what Henry has to say and would rather talk about his time in the Iraq war. After their meeting, Henry tries to tell the FBI that Ian is not a solid informant, but they don’t have time to start from scratch and get someone else on Covenant or John’s radar – Ian will have to do. Elizabeth rushes back to the White House and meets with President Dalton about the bombing in Israel. It turns out that Iran and Hezbollah had nothing to do with the bombing. The bomber was actually a right-wing Israeli who opposed the peace talks. They don’t have the bomber in custody yet though.

Elizabeth rushes back to the White House and meets with President Dalton about the bombing in Israel. It turns out that Iran and Hezbollah had nothing to do with the bombing. The bomber was actually a right-wing Israeli who opposed the peace talks. They don’t have the bomber in custody yet though.

Elizabeth is thrilled by the news and rushes back to Camp David to try and stop the Prime Minister of Israel from leaving. The Prime Minister tells Elizabeth that neither country is ready for a peace treaty, and the peace talks are ripping his country apart and causing them to kill each other. The Prime Minister is heading back to Israel, he’s not interested in any more talk of the treaty.

Elizabeth is still feeling down about the peace treaty slipping away from her, but she and Henry reluctantly head to a DC dinner party. Everyone wants to talk to Elizabeth about possibly getting nominated for a Nobel Peace Prize, which is ironic because she is nowhere near getting Iran and Israel to sign a peace treaty. When they get home, Elizabeth’s daughter Alison compliments her on how “hot” she looked on the magazine cover and Elizabeth snaps at her.

Elizabeth confesses to Henry that she feels like a failure on every level. Henry reassures her that she isn’t the only one having trouble at work, and fills her in on his drama with Ian Conroy.

In the morning, Elizabeth heads to the office, and Nadine has bad news. Rabbi Rowenthal was organizing a soccer game between Israel and Iranian kids as part of the peace treaties. But, due to the bombing, they have called off the soccer game because of safety concerns. Elizabeth realizes this is their chance to save the treaty and get Iran and Israel back to the US. Elizabeth tells Nadine that they are going to host the soccer game in Washington DC, and they are going to have to fly all of the kids in and organize it in less than 24 hours.

Nadine, Blake, Daisy, and Elizabeth begin running around like chickens with their heads cut off trying to secure Visas and a soccer field. Nelly Conlin is more than happy to help Elizabeth with a slush fund to cover expenses.

Henry is leaving the FBI late at night, he finds Ian wandering through the \parking garage. Ian puts on a show for Henry and recites the Covenant of John with a gun in his hand. Henry is obviously worried, then Ian tosses the gun to him – it’s empty. Ian is pretty convincing and he certainly just proved that he has what it takes to infiltrate the militia, but Henry isn’t impressed with his stunt and gets in his car and leaves.

Somehow Elizabeth and her team miraculously pull off the youth soccer game and get the Israel and Iranian leaders to attend. While Elizabeth and her team are enjoying the game, Jay runs around behind the bleachers meeting with reps from Iran and Israel to discuss terms of the treaty. The soccer game was the perfect way to get treaty talks going again, and it was a huge success.

Jay leaves the soccer game and rushes to meet up with his wife for dinner. Jay’s wife Abby breaks down in tears in the restaurant and tells Jay that she isn’t happy with their marriage and she thinks that they should take a break, she doesn’t feel like they are a family any more. At work the next day, Jay asks Matt if he can crash at his house for a while.

Elizabeth heads home and decides its time to have a long overdue chat with Allison. She apologizes for snapping at her about the magazine cover. Elizabeth explains that she wants the world to acknowledge all of the things that she has done, not what she looks like.