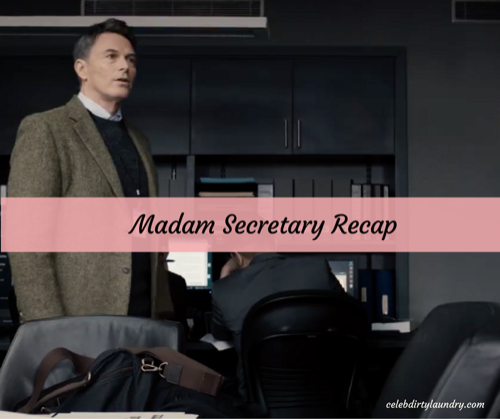 Tonight on CBS Madam Secretary airs with an all new Sunday, March 12, 2017, season 3 episode 15 called, “Break in Diplomacy” and we have your Madam Secretary recap below. On tonight’s Madam Secretary episode, as per the CBS synopsis, “Elizabeth (Tea Leoni) is shocked when the Philippines’ unconventional new president makes a pass at her during their meeting to discuss his refusal to participate in an Asia-Pacific territory treaty.”

Tonight’s episode of Madam Secretary kicks off at the McCord house, Elizabeth, Henry, and the kids are having breakfast and getting ready for work and school. Elizabeth is in a great mood, she brags to Henry that she thinks that that the US is officially on good terms with all of the countries in the Asian Pacific. Her kids joke that there is no way that the US is on good terms with the crazy new President of the Philippines, Andratta.

Elizabeth heads to the White House, Russell Jackson and President Dalton are freaking out. Apparently, crazy President Andratta went live and posted a vide announcing that his country is done living in the Americans’ shadows, and Philippines is backing out of Elizabeth’s new treaty, the Singapore Interchange. Russell thinks that they should just cut

Russell thinks that they should just cut Andratta loose, he’s impossible to deal with and his antics are over the top. Elizabeth says that she is going to try and reason with Andratta, she’s heading to the Philippines. It has been four days since Henry had radio contact with Ian, his

It has been four days since Henry had radio contact with Ian, his under cover agent at Covenant of Joseph. The FBI wants to raid the compound, but Henry is fighting them every step of the way, he thinks there is a chance that Ian is still alive and will get them the intel that they need soon.

Before Elizabeth leaves for Philippines, she corners a member of the CIA. She wants to know what they have found out about Daisy’s boyfriend Joseph Garcia’s death. It was recently revealed that he was an under cover agent for the CIA, and he was murdered. Elizabeth is concerned that he was spying on her office. The CIA won’t give her any information. Liz tells Jay to look in to Joseph Garcia while she is gone.

Elizabeth arrives in the Philippines and meets with President Andratta, he cuts through the pleasantries and says that he knows that the US put their support behind his opponent and not him during the election. Andratta is not a fan of the United States. Elizabeth bribes Andratta with some military warfare and drones, to get him to sign the Singapour Exchange. Andratta is thrilled, and a little too excited about the drones. He hits on Elizabeth and calls her sexy. When she tries to leave, he gropes her, and Elizabeth freaks out and punches President Andratta in the nose – it looks like the treaty may have just fallen through beyond repair. President

President Andratta kicks the US troops out of the Philippines, and has military police escort Elizabeth and her team to the airport and kicks them out of the country.

Elizabeth returns to her office, and she has a big mess to clean up after breaking Andratta’s nose. Jay takes her aside and tells her that he got some info on Joseph Garcia. Apparently he was snooping around the United States’ arms sales and he was especially interested in cargo ships that were headed to Somalia.

Elizabeth heads to Dalton’s office to meet with him and Russell Jackson. Apparently, Andratta’s crazy train is continuing, and not only is he pivoting away from the United States, but instead letting China slowly take over his country. The Filipino people are freaking out, Andratta seems to be the only one in the country that wants any kind of relationship with China.

Elizabeth, Russell, and Dalton reach out to the leader of Philippines military. Apparently, their military is not impressed with Andratta since he took over, and they have a plan to assassinate him and put the Vice President in to power, but they won’t move forward without the United States’ support. Elizabeth and the President have a lot to think about, can they really condone the Philippines killing their own president?

Russell is all for turning a blind eye to Andratta’s assassination. But, Elizabeth convinces Dalton that they should look for other routes, before allowing the military to overthrow the President. They hack Andratta’s emails and learn that during the election he paid off some women that he had sexually assaulted to keep them quiet. Elizabeth thinks that it’s worth a shot to track the women down and see if they will come forward so that Andratta will be impeached.

Henry finally gets word from Ian and meets up with him in the woods outside of the compound. Ian explains that he has been going through some rigorous induction ceremonies, and has been deprived of sleep and food, but everything is on track. He thinks he may have found the shed on the compound where they are keeping the bomb they built. Henry says that they will create a distraction outside of the compound so that Ian can get a look in the shed.

After meeting with a contact, Jay has new intel for Elizabeth. Apparently, Joseph Garcia had discovered some arms smuggling in Somalia, and someone at the US State’s Department was fudging the records – that’s what got him killed.

One of the women that was paid off by Andratta agrees to come to the US and meet with Elizabeth. When Elizabeth arrives at her office in the morning, the woman is already there waiting for her. She explains to Elizabeth that she wasn’t paid off for sexual harassment, she was paid off to keep quiet about something else, much worse. She agrees to talk, but in exchange she want Elizabeth to grant her asylum in the United States, she won’t be able to go back to the Philippines, it will be too dangerous.

Elizabeth gets lucky, the woman has brought along proof that Andratta has been taking millions of dollars in payments from China over the years. And, if Elizabeth goes public with it, the people will overthrow him. Elizabeth calls Andratta, and uses her new intel as leverage. Andratta has no choice but to hold a press conference with Dalton and reaffirm the Philippine partnership with the US. After the press conference, Elizabeth and Andratta exchange words about him groping her, and Liz promises him that it’s not over, and some day she will tell the world what he did to her.

Tonight’s episode ends with Henry. His men create a distraction so that Ian can get a look in the shed, but they aren’t building a bomb, the Covenant of John got their hands on a military drone. Ian meets up with Henry in the woods and delivers the bad news, and a dead body. One of the men caught Ian in the shed and attacked him, he killed him and brought the body to Henry to take care of.