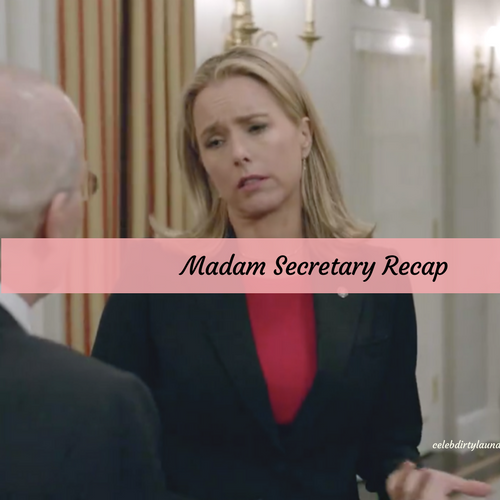 Tonight on CBS Madam Secretary airs with an all new Sunday, April 9, 2017, season 3 episode 18 called, “Good Bones” and we have your Madam Secretary recap below. On tonight’s Madam Secretary episode, as per the CBS synopsis, “Elizabeth (Tea Leoni) enlists the help of Hollywood star Ashley Whittaker to help sway the president of Kyrgyzstan to end human trafficking in his country, but the added attention could put an American captive at risk.”

Tonight’s show begins with a video of a young woman crying for her mother. She is told to be quite and returned to a room full of young women. One comforts her and says don’t worry people are looking for them. Elizabeth has a meeting with her staff and they discuss the upcoming budget cuts they face. The meeting is interrupted by the head of the FBI who tells Elizabeth that he needs her help getting the president of Kyrgyzstan to help the US with their operation to end human trafficking. Elizabeth and her team brainstorm ideas on how to get his cooperation.

Henry meets with the FBI to try to come up with a plan to get Ian out of the doomsday cult. Elizabeth has a call with the president of Kyrgyzstan who says he will work with the US if the star of a popular movie, Ashley Whittaker comes to his birthday party. Elizabeth is stunned at his request.

Elizabeth returns home late for dinner and gets the scoop about Ashley from her son. The kids tease each other about an upcoming dance. The State Department staff meets with Ashley but her mother is not interest. Henry gets a call from Ian asking him to meet him at a mall. Henry calls the FBI and says he is going to meet Ian. The FBI raids the compound but the bomb is gone. Henry realizes Ian has a bomb in his truck. He hits Ian and drives the bomb out into the country. He barely gets away from the truck before it explodes.

Nadia shows the video to the mother of the girl Lara, who is kidnapped. They use the video to convince Ashley to attend the birthday party. She convinces her mother she will be safe. Henry helps the kids get ready for the dance and meets Noodles date. He embarrasses her as they leave. Her brother overhears her date talking negatively about her and her dress.

Ashley attends the birthday party but the mission to save the trafficked girls goes wrong and all of the girls are killed including Lara. Elizabeth is devastated. The kids leave the dance early after Noodles date makes the moves on her hard. Ian is questioned by the FBI and admits he was played. He thinks the cult is up to something big and Henry needs to stop them quickly.

Elizabeth and her team meet and try to focus on their budget but struggle. Henry and the FBI realize that the cult is working to create a deadly strain of the avian flu. Noodles brother uses shaving cream to write a nasty message on Thad’s car in retaliation for the dance. Elizabeth gets the news that their budget has been approved but they still can’t be happy. Nadine is especially upset over Lara’s death.

Elizabeth calls the team together and tries to help them feel better. A poem is shared about the house having good bones. They can build on the good bones and make it a better place. The kids share their encounter with Thad and Elizabeth and Henry are very proud of the kids for standing up for what is right.