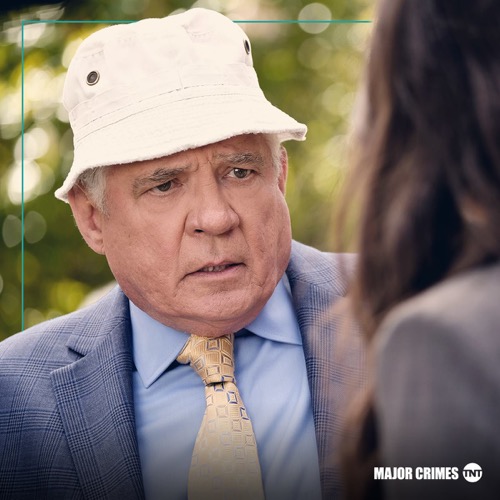 TNT Major Crimes airs tonight with an all-new Monday, December 19, 2017, episode and we have your Major Crimes recap below!  On tonight’s Major Crimes season 6 episode 8 and episode 9 episode as per the TNT synopsis, “While working two seemingly connected murders, the division suddenly uncovers a series of sexual assaults against servers from Tackles/Sharon Raydor must make decisions related to her ongoing health problems while arriving at the solution of a series of murders and sexual assaults. .

The show opens with Sharon undergoing an MRI of her heart. The doctor reports to Sharon and Andy that she needs a defibrillator implanted immediately. He will conduct the surgery now and he will be changing her status on the heart transplant list. He hopes it won’t be necessary but wants to be ready just in case. The doctor tells Andy Sharon should not climb stairs, no heavy lifting, no running and no sex. From the recovery room, Sharon calls into the team to direct their next steps. Her doctor is not happy that she still so focused on work and not her health. He says she must go home and rest.

At Sharon’s request, the team questions Bonnie’s son, Stan, again. They think he must know more. He says he knows there is a secret compartment in her briefcase. If they bring it to him he can help them find out what they need to know. The briefcase is missing but Stan says she also kept information on her Facebook Messenger. He gives them the password and the team discover several telephone numbers. They find a woman, Shelley, in San Diego and head out to interview her. They are taken aback by the cost of her car and her home. She refuses to talk to them but when asked point blank if she was raped she gets angry and tells them she just wants to forget about everything. She demands they leave.

Rusty continues to investigate Stroh with input from Sharon. The team learns that Shelley paid for her BMW and Condo with cash but can find no financial improprieties in Craig’s bank accounts. Since he runs the bars he may have to hide the cash payments to Shelley through the bar. Sharon returns to work but Andy is still worried. The team realizes that Shelley called Craig immediately after they interviewed her and wonder if she is trying to blackmail her rapist. Sharon wants Wes to continue to follow Shelley to ensure her safety.

The team gets a call from the sexual assault unit in Las Vegas related to their inquiry. The woman they are looking for is in their custody on a drug charge but they will bring her to LA for questioning. When she arrives she says she was raped while she worked for Tackles. She told the police in Las Vegas but they didn’t care and arrested her instead. She knows the name of the man but won’t tell them until she has an attorney. Louis insists that Andy take Sharon home. She shouldn’t be pushing herself so hard.

The Las Vegas DA decides to drop the charges against LaKesha. Louis and Sharon talk about her health and he tells her he is very worried about her. He cries and asks her to go home and rest. He cares deeply and wants her to be OK. She refuses and keeps working on the case. Once LaKesha learns the charges are dropped she tells them that Craig didn’t rape her. It was Bill Landon and while he raped her he said: “trust me.” This is the same phase the previous victim told them before she was killed. The team realizes that Bill Landon’s tour date also put him in San Diego and Philadelphia. They think they have their rapist.

Bonnie figured it out and Bill Landon killed her. The team goes to interview Bill but his wife tries to stop them. They interrupt him on stage and bring him into the station. Rusty and Gus talk and Gus thanks him for getting the settlement payment for him. Gus also tells him he got asked out but said he said no. He wants them to work it out. Rusty shuts him down again and tells him to stop coming to his place of employment. Bill Landon admits that he cheated on his wife but says they encounter was consensual. As they talk Sharon gets a report that the woman from Philadelphia committed suicide twos ago. The team confronts Bill with the names of the other victims they know of but he says he does not recall meeting any of them.

The Chief gets angry at Sharon after she releases a press statement that Bill Landon has been arrested for rape. He thinks they don’t have enough evidence and will be hit with a defamation suit. Sharon is sure there are many more victims and the press release will bring them out. Bill’s wife and son are furious about the press release but Sharon doesn’t believe Bill’s wife is clueless about his behaviors. Bill is released on bail.

Shelley is brought in but says she isn’t sure if she is strong enough to testify against Bill. The calls start coming in from other victims. Just as the team is about to move to arrest Bill for a murder they get the call that he has been found murdered in his car. Shot in the head just like Bonnie was killed. As the team investigates the murder scene Sharon passes out and it has taken to the hospital.

Sharon feels better but must stay in the hospital for five days. She needs a different pacemaker and will be moved up on the transplant list again. If it weren’t for her pacemaker she would have died. The team meets with Sharon in the hospital and updates her that the last person Bill talked to was Craig. Craig is brought in for further questioning. Both Bill and Bonnie were killed with the same gun. Craig agrees to allow the team to search his house. Once he does they tell him Bill Landon was found dead. He freaks out and leaves obviously very upset.

Sharon returns home and gets an update that several more women have come forward to say they were raped by Bill Landon. All of them worked for Craig and were given a ticket to see Bill’s show by Craig but a search of Craig’s properties find nothing. Bill’s wife and son meet with the chief and rip him a new one. They demand that the rapes not be investigated and focus on finding Bill’s killer. Bonnie’s son, Stan meets with the team and asks for the names of all of the rape victims since he is filing a civil suit against Bill Landon’s estate. They tell him no way.

Sharon gets very emotional talking to Andy about her health and future. She meets with her priest and tries to decide if she should have the transplant or just a different pacemaker. She asks that he perform the last rites. She has to plan for the worst. The team realizes that Craig most likely didn’t kill anyone. His cell phone shows he was nowhere near the murder sites. The team is still going to try to put the pressure on him to see if he offers any clues.

Sharon meets with the chief and temporarily steps down due to her health. She tells him about her heart. Craig and his lawyer tell the team that Bill Landon’s wife and son also knew about the women. Sharon makes a tape of herself and leaves it for her family. Bill Landon’s son is arrested for the three murders. Several items related to the murder are found at the family’s home. His widow is told that her son has confessed to everything. Sharon pushes her until she admits she in fact killed them all. As the widow yells at Sharon her heart stops again and she collapses. Sharon dies.