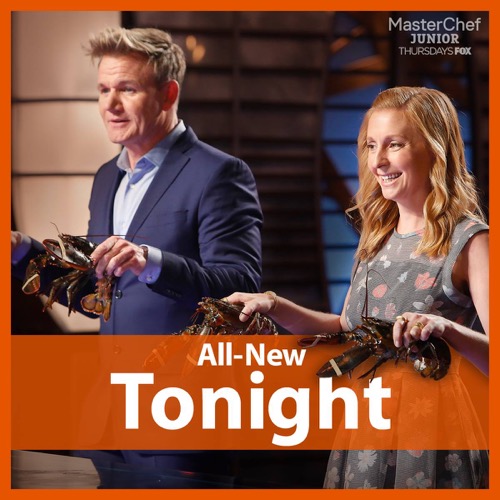 Tonight on FOX Gordon Ramsay’s Masterchef Junior continues with an all new Thursday, February 16, season 5 episode 2 called “Quest for the Apron, Pt. 2,” and we have your weekly Masterchef Junior recap below. On tonight’s Masterchef Junior episode as per the FOX synopsis, “The Top 20 chefs are revealed after the final 12 spots are filled following a series of challenges that involve steak, lobster and cupcakes.”

Dredyan is making a vanilla sponge cake cupcake with chocolate gonash filling and chocolate frosting. He feels confident about getting an apron. Peyton is making blood orange cupcakes with raspberry sauce drizzled over them. Dredyan begins to cry because his cupcakes are all liquid, Christina encourages him to start again.

The two aprons go to Adam and Peyton.

The next group of 4 contestants are to cook steak. Anna (11), Shayne (13), Solomon (10) and Nicholas (9) are all from Texas and have 30-minutes to cook a MasterChef worthy steak. Shayne is making a Cajun ribeye with mashed potatoes. Solomon is making a ribeye with cheese grits, asparagus, and grilled peaches.

Anna is making a BBQ ribeye with potato latkes and a carrot salad. She says she is not intimidated by the 3 boys but she says Shayne is her biggest competition. Nicholas is grilling a ribeye steak with Brussel sprouts, purple cauliflower, and potatoes. He says he cooks a lot for his dad who is a general manager in a restaurant.

The two aprons go to Shayne and Solomon who promise to proudly represent Texas.

The next group of four needs to create their signature chicken dishes. The young cooks up now are Avani (8), Eddie (9), Grace (8) and Londyn (9). They are given 30-minutes to cook the best chicken dish of their entire lives.

Grace is the youngest cook in the competition and tells Christina she is making a stuffed chicken breast. Eddie tells Gordon that he is cooking chicken masala and Gordon joke he shouldn’t be drinking at his age since he needs wine for his dish.

Christina comes to Avani’s station and tells her she is making a lemon chicken with lemon grass, bell peppers, jalapenos and coconut milk. She says her dad was the one who taught her how to cook. Londyn is making spicy BBQ Jamaican chicken wings with Caribbean coleslaw.

The two talented young cooks who receive aprons are Eddie and Avani.

The next group of winners, knocked Christina and Gordon’s socks off. Afnan (12), Mashu (13), Charlie (9) and Evan (10) prepared their own individual signature dishes from beef burgers, to ravioli, to shrimp; they all earned the next four aprons, leaving 2 left.

The final group need to create a dish with Lobster as the star. Lila (9), Jake (11), Jayda (8) and Sam (9) come into the MasterChef kitchen and are in awe of its size. They are all from Massachsetts and are told they have 30-minutes to cook their live lobsters and create a dish worthy of an apron.

Jayda is making lobster rolls with celery leaves on top. Christina wishes her luck. Jake tells Gordon that cooking is love, knowledge and everything. He is making a lobster mac and cheese with panko crumbs. He says he is trying to impress his dad who passed away a few years ago; Gordon offers his condolences and Jake says his dad was a chef too who worked all over the world. Gordon tells him his father is so proud of him right now and they high-five.

Sam is making a lobster summer roll in memory of his family trips to Maine every summer. Lila tells Gordon she is making lobster wontons and a dipping sauce.

Gordon tells them they just tasted four very good dishes but there are only 2 aprons left. The one who nailed it beautifully is Lila with the final apron going to Sam.