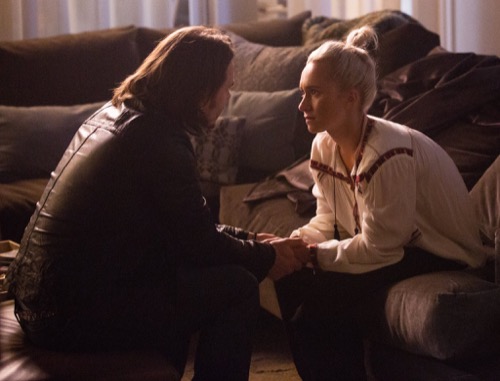 Tonight on CMT Nashville starring Hayden Panettiere returns with an all new Thursday, January 19, 2017, season 5 episode 4 called, “Leap of Faith.” and we have your weekly Nashville recap below for you. On tonight’s Nashville episode, as per the CMT synopsis, “Rayna (Connie Britton) receives a stunning offer from tech guru Zach Welles regarding Highway 65; an impatient Juliette (Hayden Panettiere) seeks advanced treatment; Will (Chris Carmack) and Kevin look for an apartment together.”

Tonight’s episode of Nashville kicks off with Juliette at home with her physical therapist – she has regained feeling in her legs, but she is still a long way away from walking. Juliette is eager to speed up the process and wants her therapist to put her in a an anti-gravity machine she saw online that helps patients in her situation. The therapist insists that Juliette isn’t ready for anything like that.

Will is at home sleeping when his boyfriend barges in – he found the perfect apartment for them to move in to. He seems much more excited about them living together than Will does. Will grumbled that he had a gig last night, and his boyfriend is upset that he didn’t invite him.

At the studio, Rayna and Bucky are pouring over music videos. Bucky warns her that they can’t afford any of those directors. Rayna is desperately trying to find someone that they can afford to make Scarlett and Gunnar’s music video.

After Juliette’s therapist leaves, she is upset – Juliette rants to Avery about her therapist telling her she wasn’t ready for the machine. Avery wants Juliette to get ready for counseling, but she announces that she isn’t going. She has more important things to do, like get out of her wheelchair and start walking.

At home later that night, Rayna tells Deacon that they have a dinner date with Zach Wells, the rich tech guy from silicone valley. Deacon’s not thrilled, but Rayna points out that Zach is a big fan and he has a lot of money, he might be able to help out her company and their cash flow problem.

Will heads out to look at the apartment that Kevin picked out for them. The apartment is great and it comes fully furnished – but it’s not really what Will is looking for. The real estate agent flirts with him shamelessly, and he just happens to live in the building too. Things get awkward, and Will makes an excuse and leaves.

Juliette goes over her therapists’ head and convinces the medical director to let her go in the machine to help her walk again. But, as soon as Juliette gets in the harness, she begins having flashbacks to the plane crash and starts hyperventilating.

Later that night, Rayna and Deacon meet up with Zach Wells for Scarlett and Gunnar’s show at the Bluebird Café. Zach thoroughly enjoys the show, and afterwards he tells Rayna that he is interested in going in to business with her in country music. He tells her to sleep on it and give her a call and let her know if she is interested.

Deacon is skeptical about Zach Wells, when they get home he rants to Rayna that he thinks Zach’s sudden interest in country-music is strange. Rayna agrees that Zach is strange, but she’s willing to put up with it for some cash to put in to her business. Kevin shows up at Will’s house, he tries to hide from him, but Kevin knows he is at home. Kevin has been dying to hear what Will thought about the apartment. It’s obvious that Will is dragging his feet – but Kevin is oblivious and says that he will fill out the application.

Kevin shows up at Will’s house, he tries to hide from him, but Kevin knows he is at home. Kevin has been dying to hear what Will thought about the apartment. It’s obvious that Will is dragging his feet – but Kevin is oblivious and says that he will fill out the application.

Avery notices that Juliette hasn’t been taking any of her pills, and he’s not happy, she’s not going to get better if she doesn’t follow the doctor’s orders. Juliette screams that she is tired of everyone trying to control her – she doesn’t want to risk getting addicted again. Avery and Juliette have a huge blow-up and he storms out.

A few days later, Kevin hears that he and Will didn’t get the apartment and he’s pretty upset. It sounds like Will may have “Forgotten” to mail the application to ensure that it fell through.

Juliette heads to Hailey’s church to pray – she confesses to the preacher that she doesn’t know how. He gives her a few pointers about how to have a conversation with God and explains that there is no wrong way to pray, she just needs to say how she feels. Once Juliette is alone, she asks God “Why me?” Juliette’s having a tough time accepting the fact that everyone else on the plane died and she got to live.

At home, Rayna gets a creepy letter in the mail from an unmarked sender and the envelope is full of rose petals. The letter is at least 10 pages long. It looks like Rayna has a stalker.

While she is looking at the creepy letter she gets a phone call from Zach Wells, he’s still trying to get her to go in to business with him. Rayna and Deacon show Bucky the bizarre fan letter – he reassures him that it is nothing to be upset over, Rayna has gotten a ton of those creepy fan letters in the past. Bucky thinks they should be worrying about the company’s money troubles, not obsessed fans.

Rayna and Deacon show Bucky the bizarre fan letter – he reassures him that it is nothing to be upset over, Rayna has gotten a ton of those creepy fan letters in the past. Bucky thinks they should be worrying about the company’s money troubles, not obsessed fans.

Will and Avery get drinks – Will opens up to Avery about his concerns about his relationship. Guys are throwing themselves at him left and right, and Will isn’t sure if he really wants to settle down. Avery warns Will that moving in with your boyfriend is not the way to save your relationship.

Avery heads home and Juliette is up late watching the Home Shopping Network. Avery apologizes for yelling at her earlier, Juliette feels bad too and apologizes for being so difficult. She confesses that she is scared Avery will think she is just a burden because she can’t walk. Juliette tried to seduce Avery, but he pulls away from her. Avery reassures her that he loves her, but with everything that has happened, he needs some time.

Will shows up at Kevin’s house with flowers, but Kevin doesn’t seem too happy to see him, he knows that Will threw out the application and doesn’t want to live with him. Will admits that he doesn’t think they should live together. Kevin knew it was too good to be true and Will wasn’t ready for a real relationship. Will heads to his gig, officially a single man again. He gets

Will heads to his gig, officially a single man again. He gets misty eyed while he is performing and announces that he is going to sing a song that he wrote for his true love.

Meanwhile, Rayna gets the contracts from Zach Wells. She officially goes in to business with him and signs over 20% of her company to the rich tech guy.

Tonight’s episode of Nashville ends with Juliette and Avery in bed together, making love.