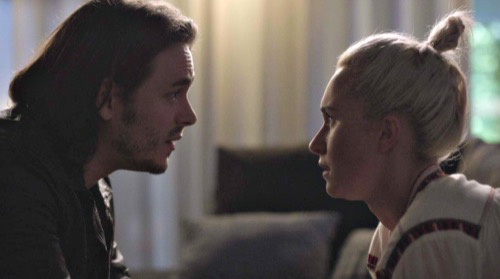 Tonight on CMT Nashville starring Hayden Panettiere returns with an all new Thursday, January 26, 2017, season 5 episode 5 called, “Love Hurts.” and we have your weekly Nashville recap below for you. On tonight’s Nashville episode, as per the CMT synopsis, “The Exes make a music video, but Scarlett (Clare Bowen) and the director, Damien George, fight over their differences. Meanwhile, Clay and Maddie’s (Lennon Stella) relationship builds, and he shows her a different part of town.”

Tonight’s episode of Nashville kicks off with Rayna and Zach Wells taking a tour of a property called Riverwood – that’s where Damien will be shooting Gunnar and Scarlett’s new music video. Inside the mansion, Scarlett and Gunnar are getting their wardrobes. Scarlett is upset because the dress that Damien wants her to wear is see-through.

Back at the office, Rayna and Bucky are running numbers for the video and Rayna realizes that a picture of her daughter is missing from her desk. She looks around and finds it in Randall’s desk drawer – interestingly, he didn’t show up for work.

Maddie is still hanging out with her new friend Clayton Carter. He takes her to a hole in the wall bar to hear his friend sing, then she calls him up on the stage to sing. Maddie watches from the audience as Clay performs on stage. Afterwards, Clay and Maddie take a late night stroll and share their first kiss. Clay pulls away and shuts everything down because Maddie is underage. She’s not happy and clearly offended.

Bucky and Rayna track down Randall and confront him about the picture that he stole from Rayna. Randall breaks down crying and apologizes, he says he just wanted a souvenir for his mom. Randall apologizes up and down, but swears that he didn’t write the creepy letters to Rayna. Bucky and Rayna realize that Randall is telling the truth about the letters – which are getting even creepier and coming every day now.

Later that night, Clay calls Maddie. He wants to stay friends with her, they smooth things over and Maddie heads out to meet up with him.

At the mansion, Damien and Scarlett are still butting heads. She is supposed to be playing an angry character in the video – finally Damien pushes her to her breaking point and she snaps and hits Gunnar. Everyone is thrilled by how the scene turned out…except for Scarlett.

Maddie heads to Clay’s house with her guitar and plays the song that she has been working on for him. Maddie tries to kiss him and Clay pushes her off. He reveals that he’s not really worried about her age, he’s worried about the fact that he is black and she is white. They wind up arguing over whether or not race matters. Clay snarks that she doesn’t know how the real world works. Maddie packs up her stuff and rushes out.

Scarlett and Damien wind up in a another huge fight over the music video. He keeps trying to push her to be something that she is not, and she has had enough. Even worse, it seems like Gunnar is taking Damien’s side and wants Scarlett to be “more free.”

Maddie texts Clay, but he doesn’t respond. After work, Maddie heads to Juliette’s house to get some advice about Clay. Juliette says that screwed up men are sexy, she should know, but it’s not Maddie’s job to try and fix Clay or figure him out. Juliette wants Maddie to learn from some of the mistakes that she had made.

Meanwhile, Clay is hiding something from Maddie, he’s ignoring Maddie and lying in his dark room with a prescription bottle.

Rayna and Bucky head to the mansion to check in on Scarlett and Gunnar’s video. Rayna can tell that something is off with Scarlett and she’s not happy. Rayna shares her concerns with Zach Wells, Rayna is worried that he might be being too hard on Scarlett.

Maddie has been calling Clay all day and he still hasn’t answered. She finally decides to go to his house an see why he is ignoring her. When she arrives, it looks like Clay has been badly beaten, he’s bleeding from his head and passed out.

Maddie calls for help and stays at the hospital to make sure that he is okay. But, the nurse at the front desk won’t give her any info about Clay because she isn’t a relative. Will bumps

Will bumps in to Zach on the set of the video. Zach apparently thinks that Will is making a big mistake working for Luke and wants to “talk business” with him. They exchange numbers.

In the mansion, Damien is screaming at Scarlett, he’s upset that Scarlett won’t reenact a Fifty Shades of Grey scene. They shout back and forth while Gunnar is tied to the bed. Finally, Damien manages to get through to Scarlett and she unleashes her inner angry woman and films some amazing scenes.

Clay is finally released from the hospital but he refuses to let Maddie give him a ride home. Clay doesn’t want to see Maddie any more, he explains that he is no good for her, he’s bipolar and he has bad mood swings. Maddie doesn’t care – she want’s to be with him, but Clay won’t back down.

The music video is a wrap, before Damien leaves, he says goodbye to Scarlett and tells her how brilliant she is. Scarlett doesn’t want to talk to him, he promises that she will feel different once she sees the video.

Rayna and Deacon are not happy that Maddie was out half the night and didn’t answer her phone. In the morning, they confront her, Maddie explains that Clay had an emergency. But, it’s over now, because he didn’t want to be with her. Suddenly, there’s a knock at the door, it’s Clay. Apparently, he had a change of heart and wants to take their relationship to the next level and meet Maddie’s parents.

Tonight’s episode ends with Rayna at the office, suddenly her stalker barges in and tries to personally deliver a letter. Bucky grabs him and holds him back and Rayna shouts at someone in the office to call 911.