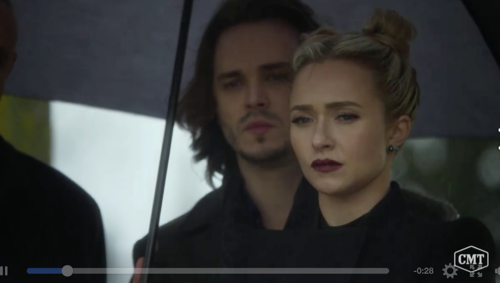 Tonight on CMT Nashville starring Hayden Panettiere returns with an all new Thursday, March 2, 2017, season 5 episode 10 called, “I’ll Fly Away.” and we have your weekly Nashville recap below for you. On tonight’s Nashville episode, as per the CMT synopsis, “A legal dispute threatens to break apart the family; Juliette (Hayden Panettiere) demands to perform at the CMT Music Awards; Will and Zach are drawn closer together.”

Tonight’s Nashville finale kicks off in the cemetery, Rayna’s friends and families have gathered for her funeral in the rain. While Daphne sobs uncontrollably, Deacon reads a passage aloud. He can barely hold it together. Even Rayna’s ex Teddy has returned for the emotional service.

After the burial, everyone gathers at Rayna’s house with a dish to pass – there are several familiar faces that we haven’t seen in quite a while. Deacon arrives, and everyone stops what they are doing and stares at him. He makes his way through the silent crowd and rushed upstairs.

Downstairs, Scarlett lectures Daphne and Maddie about staying together in the crowd. Meanwhile, Rayna’s sister thinks that Maddie’s boyfriend Clay is hired help. Zach Wells has brought along his laptop, apparently he put together an entire slideshow of Rayna. Bucky gets upset that he’s playing it and rushes away. Zach’s super awkward, funerals clearly aren’t his forte. Luckily, Avery and Juliette’s daughter distracts everyone with her cuteness.

Bucky gets a phone call from the people at CMT, they are putting together a tribute and want Faith to sing in honor of Rayna at the Awards Ceremony. Juliette is livid when she learns what is going on, she tells Bucky to call them back and tell them that she is the only who should be singing a tribute for Rayna and she wants to do it.

Scarlett heads upstairs to check on Deacon. He’s sitting in the dark, staring out the window, and clutching Rayna’s guitar pick for dear life. Scarlett tries to talk to him, but Deacon has gone totally mute, he’s not in good shape.

Bucky tracks Juliette down and tells her that he talked to CMT and she is on – she’s going to perform live on the show. Juliette is thrilled, until reality sets in. She hasn’t been on stage since the plane crash.

Scarlett has spent the entire day rushing around and taking care of everyone else in the house. She slips away from the crowd and has a total meltdown, and begins sobbing. Gunnar finds he crying in the corner and comforts her.

Maddie tucks her dad in to bed. Scarlett is sleeping in bed with Daphne, and Gunnar passes out on the couch.
In the morning, Scarlett, Deacon, Teddy, and Rayna’s sister meet with Rayna’s lawyer. They learn that Rayna didn’t have a will – so it’s unclear who will be taking care of the girls and Highway 65. Teddy announces that he’s taking the girls, he legally adopted Maddie and Daphne is his biological daughter. Deacon clearly isn’t happy about it.

Later that afternoon, Maddie overhears Teddy and Rayna’s sister discussing him getting custody of the girls. She freaks out and shouts at Teddy that he can’t decide that and take them away. Maddie rushes to her dad’s room and tells him that Teddy and Tandy are plotting to take the girls behind his back. She beds him to do something.

Deacon confronts Tandy and Teddy, he says he wants to see the legal papers that they are going over. Tandy points out that she invested millions of her own money in to Rayna’s company and she’s not going to sit back and watch him drive it to the ground. Deacon tells them that he will see them in court and stomps off.

All of the confusion is taking a toll on Daphne and Maddie. They both miss their mom desperately, and they are afraid that they might split them up.

Later that night, Tandy tries to talk to Deacon. She just wants what’s best for the girls and their mom’s company. She warns Deacon that if he takes them to court, he won’t win, and it will just be even harder on the girls.

Deacon heads downstairs, and he walks in on Teddy and Maddie talking. Teddy tells Maddie that he loves her and he wants her to come live with him and Daphne. Deacon interrupts and shouts at Teddy to get out of his house, he’s not going to let him manipulate his daughter like that. Teddy tries to provoke Deacon and get him to him, but Deacon doesn’t take the bait.

Juliette has been rehearsing Rayna’s song for the CMT Awards. She has a lot of anxiety about getting back up on the stage, and she’s afraid that she won’t do the song any justice.

Clay finally returns to Maddie’s house to check in on her. He explains that the funeral freaked him out, because it brought back memories from when his own mother passed away, he promises to be there for Maddie from here on out.

Daphne has been spending a lot of time lying in her bed, crying. Scarlett tries to comfort her. Daphne admits that she’s scare she will have to choose who her dad will be. She knows that whether she picks Deacon or Teddy, the other one will hate her. Deacon overhears Scarlett and the next day, everyone gets dressed and heads to the CMT Awards for Rayna’s tribute. Deacon corners Teddy and tells him that he doesn’t want to put Daphne and Maddie through any more heartbreak, and Teddy can be their guardian.

Someone comes and grabs Maddie out of the audience and tells her that Juliette needs to see her in her dressing room ASAP. Juliette is supposed to be on the stage in 2 minutes. She wants Maddie to take her place and sing Rayna’s tribute song. It feels right to her – that Maddie sings it.

The ushers rush Juliette on stage – she shares a touching memory with the audience about growing up listening to Rayna’s music. The crowd goes wild when Juliette announces that Maddie is going to take her place. Maddie joins Juliette on stage and takes over the mic and performs her mom’s classic song, “Sanctuary.”

About halfway through the song Maddie breaks down crying and Deacon and Daphne rush on stage to comfort her. Daphne picks up where Maddie left off and continues singing, Deacon and Maddie join her for a beautiful trio.
After the awards show, Teddy corners Deacon backstage and commends him for what he did. He tells Deacon that he’s a good father, and he wants him to take care of the girls.