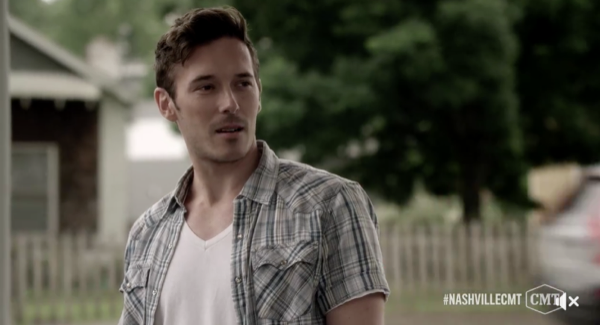 Tonight on CMT Nashville starring Hayden Panettiere returns with an all new Thursday, July 27, 2017, season 5 episode 20 called, “Speed Trap Town” and we have your weekly Nashville recap below for you. On tonight’s Nashville episode, as per the CMT synopsis, “Gunnar visits his hometown and faces the ghosts of his past; Maddie and Juliette get nominated for the same American Music Award; Deacon helps Jessie record; Scarlett learns self-defense.”

Maddie wakes up to the news that she has been nominated for a major music award. Juliette has too, Daphne and Deacon share. Maddie’s smile fades for a second. Meanwhile, Juliette is on the phone with Avery, he congratulates her for her nomination. She isn’t happy, but says thanks. Avery is on the tour bus with Gunnar. He asks Gunnar if he will visit his hometown. Gunnar supposes.

Jessie is singing and playing the guitar while Deacon watches by Face time.  Gunnar travels with his hometown. He looks out the window at the small stores. He arrives at a nursing home where he goes to visit his grandma. She lights up a secret in her hospital bed. She is passing soon, she tells him. If she smokes it won’t matter. Gunnar heads to a hotel. He calls Scarlett. Tells her about his grandma. Scarlett tells him she is okay. She’s cooking. She wants to call him back. She gets off the phone and takes a deep breath. There is a clatter outside that rattles her. She is scared. She grabs a butcher knife and peers outside. It’s a raccoon.

Scarlett shows up at Deacon’s. She is just in time for ice cream. Scarlett wants to stay the night. She has brought her things with her. Deacon asks what’s up. She tells him she is freaked out. He gives her ice cream and a pep talk about how much she has been through. Maddie points out that maybe she needs to take a self-defense class.

Juliette’s manager tells her that the war between her and Maddie is blowing up. She needs to deal with it. He wants to facilitate a sit down. Juliette thinks it will be fine.

Gunnar is pumping gas when he sees his old friend Kelly. She asks him what he is doing home. She moved back last year. She has been following his career. He tells her he was just leaving. She wanted to catch up. He makes plans to meet her later.

Jessie sits down at breakfast with Deacon. She tells him sorry she is late. Problems with her ex and her child’s schedule. He wants to talk about her song from the other day. The song spoke to him. He tells her that he has some studio time for her. She turns it down. She has a friend who’s helping her.

Gunnar gets ready in his hotel room. Scarlett calls. She tells him about the raccoons and the class she plans to take. He tells her he is still home. He thought she wanted space. Her calls are confusing for him.

Deacon comes home. Maddie is sitting in the kitchen. Daphne is at a friend’s. Deacon picks up on Maddie’s strange mood. He reassures her that Jessie is just a colleague. She tells him she loves him, regardless.

Gunnar and Kelly sit in the old high school field drinking. They talk about old times and what they have been up to.

Scarlett is in class. She is having trouble with the aggression part. She just wants to get away. Her instructor tells her not to be so nice.

Gunnar and Kelly walk through their old school. She runs to the bathroom while Gunnar stands in an old classroom having a flashback of math class. He recalls the day he was told his parents died. His eyes fill with tears. Kelly interrupts. They head out. She wants to see him tomorrow. He tells her that would be great.

Deacon and Jessie sit on the couch in the studio watching others perform. Scarlett shows up at the studio. She tells Deacon that she has been writing since her and Gunnar are on a break. She misses him. She starts crying. Deacon assures her it’s going to be all right.

Jessie’s ex-husband shows up at her house to surprise them. He wants to know where there son is. He gives her a hassle because he is at a friend’s and wants to sleep over. After threatening her, he leaves when she agrees to bring him at 5.

Gunnar visits his old childhood home. A little girl that lives there shows him around. He has a flashback of him and his brother singing and playing guitar. His grandmother comes in and yells at them for the racket. After she leaves his brother slips out the window. He has had with their grandmother.

Gunnar calls Scarlett to talk. Being home is really weird for him. He stops. He is sorry he called her. She tells him he isn’t a bother.

Deacon calls Jessie. He wants to meet her at 5 at the studio. She finally agrees. Maddie is sitting in her room looking at a tweet from Juliette. She responds. Juliette sees it. She is the car with her manager. She’s mad that Maddie is calling her a thief.

Deacon watches Jessie sing in the studio. He asks her to do a couple more lines. She tells him she isn’t feeling it. He gives her a talk. She is her only obstacle.

Scarlett is in class. She is next in line to fight the instructor. She gives him her all. “Yes, yes,” he yells. She has got it. He tells the class not to mess with her.

Kelly shows up at Gunnar’s hotel. He isn’t sure if he wants to go out. He wants to know if she thinks he seemed like a happy kid. She wants to know why he is asking. They talk about his grandma, losing his parents and getting through it all. She leans in and kisses him. He pushes away. She tells him it is okay. She is married to an unsuccessful salesman they went to school with.

Jessie asks Deacon why he is helping her. He tells her she is good and she deserves it. She acknowledges that she has treated him like her ex, someone who has controlled her. She apologizes.

Gunnar confronts her grandmother. He knows that she didn’t want to raise him. She tells him she did her best. He tells her that he became a damn good music and he is going to play herself he wrote whether she likes it or not. She stays seated and listens.