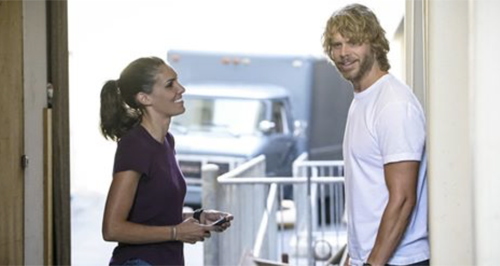 Tonight on CBS NCIS: Los Angeles returns with an all new Sunday, October 15, 2017, season 9 episode 3 called, “Assets” and we have your weekly NCIS: Los Angeles recap below. On tonight’s NCIS Los Angeles episode, as per the CBS synopsis, “A Navy lieutenant, who specialized in monitoring classified intel, is murdered while on leave in Los Angeles. The investigation uncovers classified surveillance briefs she smuggled into the city that may have been sold to a foreign buyer.”

Sam was selling his house. He and the kids had gone through the place and had taken everything they wanted to keep however none of them wanted to stay there nowadays and so Sam was selling it. But Sam hadn’t told his partner that he was going to sell the house. Callen had found out when he drove pass there and thought he could drop in on a friend. So Callen had later asked for an explanation because Sam used to grill him about owning his own house one day and how important it was.

However, Sam hadn’t liked that Callen was checking up on him and had told his friend that it was time to let the house go. So the two had benched their conversation because they received a case. NCIS had gotten pulled into investigating the death of Navy Lt. Naomi Elder. Elder had led a small elite unit that dealt with classified intelligence yet she had been in town seemingly on vacation. She had gone to stay with a couple of friends from college and had used their place as a home base. Elder took frequent trips to other areas where she did some sight-seeing and had recently been happy because she found a perfect pool she could use for exercise.

The friends told Callen and Sam that Elder hadn’t been acting strange and that they hadn’t seen anything out of the ordinary. Yet, Elder had gone to that pool to swim and someone had killed her right as she met someone. Elder had been speaking to Ryan who had wanted to get her phone number, but two bullets suddenly put their conversation to an end. Ryan said that he felt the bullets go past him on his right and that afterwards he saw something glow red not that far from where they were standing. So Kensi used his description to find out where the sniper had made his shot and it turns out it was from the building next to the pool.

The building had somewhat been abandoned and so it was easy for anyone to get inside. But Kensi had followed the point of entry and she realized that it hadn’t been a clean shot. There were several things standing in the way of a perfect shot and that meant whoever killed Elder must have been an expert. So they checked the scene and they found fresh tracks from a motorcycle though they weren’t the only ones to find something. Both Sam and Callen had looked through Elder’s stuff and they found a slightly damaged Micro SD card. And that didn’t make sense because Elder didn’t know why anyone would attack Elder much less why she would have an SD card.

Commander James Miyazaki said that everyone liked Elder and that there’s never been problem with her. Though Elder’s things revealed she had had highly classified information on surveillance techniques and so the team had to find out what Elder was investigating. She had looked into the SD card for a reason and she had apparently gotten into contact with someone local while she was supposedly on vacation. So Sam and Callen went to go check out Geno Preston while Elder’s friend suddenly had something to say. Kenneth and Lynn Styger had known Elder since they were kids and the two women had been like sisters however Kenneth said his wife was acting oddly.

Kenneth said his wife wasn’t talking to him about Elder and not only was she cutting herself off from feeling anything about Elder’s death, but she was also acting like she was waiting for something. However, Kenneth couldn’t put a name to it and so Callen had forgotten all about it when he and Sam went over to Preston’s. Preston’s place had looked ransacked and both men knew Preston was dead. So that too begged the question of why. Was Preston working with Elder on the card and what would they have done with it? The card held valuable information and therefore they could have been selling it off except that didn’t explain why they died.

Kensi and Deeks had followed their motorcycle information to a warehouse and there they had come under fire. Their suspect had had friends and Kensi and Deeks had been forced into shooting them just to survive the whole ordeal. But with several suspects dead, they were still left without answers. The men came to the country with fake passports and they had originally traveled from China to the Philippines and then to the states. So they could have been the party intending on buying the SD card though yet the two deaths still needed an answer and Nell and Eric tracked down the one motorcyclist that got away.

The one guy that got away had gone over to the Stygers and he appeared intent on keeping them as hostages. Yet, NCIS showed up and freed the couple. So the Stygers’ part in what happened was never truly explained and they had killed they one suspect they had left though no one back down from EAD Mosley when their new boss proved to be angry with them. Mosley had taken them all to task for their lack of intel and she said that they had to get better. And so the team were saved from an overlong lecture because had had to go Washington for a meeting and was even taking Special Agent Harley Hidoko with her.

The two had made the others nervous and so their trip to Washington was considered almost as if it was break. Though NCIS later learned that money and a backup copy of the intel was found in Elder’s possessions. So they all took that as proof that she was trying to double-cross China’s Intelligence and had gotten killed for it alone with her partner, but they had told Mosley that they would keep looking into this because none of them believed it was quite over.