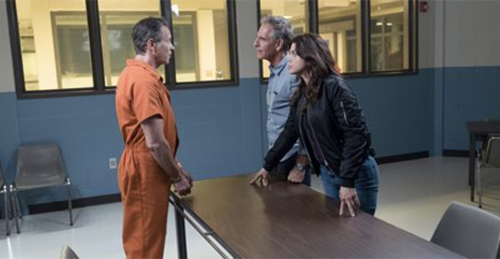 Tonight on CBS NCIS: New Orleans returns with an all-new Tuesday, December 12, 2017, season 4 episode 10 Fall Finale called, “Mirror, Mirror,” and we have your NCIS: New Orleans recap below. On tonight’s NCIS: New Orleans episode as per the CBS synopsis, “After Rita Deveraux tells Pride that Douglas Hamilton is about to make a deal to get out of prison, Pride and the team rehash the Clearwater case in hopes of locating his mystery partner and spoiling his bargaining chip.”

Pride has been working with the therapist to get to the bottom of his issues. However, HQ was still refusing to acknowledge how far he’s come in therapy because they weren’t sure if he was going to go rogue again. So Pride was wondering what more he could when he got the call about a new case. It involved a naval serviceman drowning at the same level that Mayor Hamilton had almost blown up and the coincidences didn’t end there. The serviceman also happened to be Isaac Newell and he had been the same man that had helped Hamilton almost kill everyone in Clearwater though Pride could have sworn Newell was supposed to be in jail.

Pride’s Clearwater case had been open-shut. He had taken down Hamilton and had also gone after Hamilton’s entire team which meant there was no reason for Newell to be out much less working on the same job as before. Though it turns out Pride had been kept out of the loop on this one because everyone knew his history with Hamilton and so that’s why no one bothered to tell him that Newell had cut a deal. The man had agreed to hand over evidence on someone much higher on the food chain and Newell hadn’t been the only one that made a deal. There had also been a few others that were going to evidence and they all died before they gave their testimony.

The others had clearly been murdered however Newell had been supposedly died from falling off the levee and so Sebastian had to take a closer look at the autopsy. But while Sebastian was trying to figure out what caused the fall, the others were trying to handle Pride. Pride had been livid when he learned people were making deals and had gone to his old friend D.A. Investigator Charles Fournier because Fournier had also worked the Clearwater case. So Pride had wanted to know what’s been happening with the case and who were the men going to testify against. And his friend hadn’t been able to offer up much because he said the Assistant U. S. Attorney Jan Schumaker was closely guarding the secret about the “bigger fish”.

However, the guys talked about it and they believe this bigger fish could be Hamilton’s secret partner. They had always suspected that there was someone that was protecting Hamilton and so they could understand why Schumaker was making a deal yet Pride still believed he should have been filled in and had even talked to Schumaker about it. She said she couldn’t reveal anything because she didn’t want to risk jeopardizing the case by bringing in anyone that didn’t need to know and Pride revealed that he needed to know. He told her that the witnesses were dead and that he couldn’t solve their murders until he got a name.

So Pride thought Schumaker would eventually give up the information and she surprisingly remained firm on the subject. She wasn’t going to tell him anything and Fournier allegedly had nothing to tell. Yet, Pride went back to the office to find Rita there. She had found out something she knew was going to shock Pride and had flown in to give him the news personally. Rita, it seems had found out Hamilton had also agreed to a deal and so she wanted to warn Pride that Hamilton was soon going to be released from prison through the news went down as well as expected. Pride refused to allow Hamilton to be released and had sworn he was never going to let that happen.

Pride had almost lost everything because of Hamilton and so he couldn’t comprehend why the other man was being released. Even if he did have a name to trade! Though Pride’s friends and team all came together to help keep Hamilton behind bars. They called in favors and had used everything at their disposal in their attempts at getting Hamilton’s partner’s name. So Sebastian’s news came at the right time. He found out that Newell had been attacked by a drone and so the team figured Newell had been killed by a hired a gun that could lead them back to the name, however, Pride decided to test his luck by going right to the source.

Pride went to see Hamilton in prison and tried to get him to see that it would be safer staying in jail. However, that didn’t work and neither did appealing to Hamilton’s conscience because Hamilton didn’t have one. So Pride had failed with Hamilton and he had also seen his father at the prison, but hadn’t wanted to talk to him and had instead gone back to the office where his team found something. They found the hired guy that was killing off the informants – it was Fournier! Fournier had had one of those GPS systems that geotagged him at the same location as each of the murders and he had also been an avid drone collector.

Only Pride couldn’t wrap his head around it being Fournier because there was no reason for his friend to help Hamilton. But Pride eventually realized that there was one motive. Fournier had lost his wife because of Hamilton and was therefore willing to kill him as well as Hamilton’s partners for what they did. So Pride also figured out how he could use Fournier to get to the mystery partner. He called HQ and had told them that he wanted to make Fournier believe he was on his side therefore Pride wanted his friend to believe he was prepared to kill Hamilton rather than let him walk. And all he needed to sell his story was getting “fired”.

HQ allowed it to be known that Pride was fired in order to get him close enough to Fournier to gain information. Yet, Pride was warned that if he screwed it up that he would be the only one taking the blame. So Pride managed to go rogue without going rogue and he later convinced the others to go along with it. Including Eisner. Eisner was worried Pride might get too caught up in his own plan and had been worried about him, however, Pride knew that Eisner was just saying what he did because he cared and so he assured him that he got this. He later jumped into Fournier’s car and had told Fournier that he knew that it was him behind the murders.

Pride though had claimed that it hadn’t mattered to him because all those guys deserved to die for what they did and so Fournier decided to bring Pride in on his plan. The two had gone to the courthouse where Hamilton was supposed to be released and Pride hadn’t known how they were going to get to Hamilton, but Fournier told him that their friends were going to help and so Pride didn’t suspect anything was off until someone pulled the fire alarm. That had apparently been the cue for Fournier because he followed Hamilton and the U.S. Marshal before knocking the marshal out to get his gun. However, Fournier had then given the gun to Pride.

Fournier had wanted Pride to shoot Hamilton. Though he had been in for a surprise when Pride instead pointed the gun at him. Pride told Fournier that it was all over and that he was going down for the murders yet he said Fournier could make his own deal and hand over the name of Hamilton’s partner. So Fournier had been close to telling Pride something when Assistant US Attorney Schumaker had shot him before he could reveal their employer. It turns out she had pulled the fire alarm and because she saw the other marshals first she had also told them that Pride had killed Fournier. And so Pride had grabbed Hamilton and made a run for it.

Pride knew Schumaker could no longer be trusted and so he hadn’t wanted to hand Hamilton over to his death. But he took Hamilton back to that levee and the two had argued when Hamilton accidentally fell over. So Pride could have let Hamiton, however, he chose to save Hamilton’s life and it seems that was the right choice because his own people had cleared his name. They had noticed Schumaker had left the courthouse and hadn’t been seen since claiming Pride was a murderer. And so Rita made sure to grab the cell phone Schumaker had left behind because it had the mystery partner’s phone number in its system.

And the partner was turned out to be Honorable Judge Edwin J. Miller. The Judge made deals between organized crime and Hamilton and so that’s how Hamilton got most of his funding yet Hamilton couldn’t get out of jail when he no longer had a name to trade and so he stayed behind bars even as Pride ensured his father was paroled. He realized that his father was the reason why he made sure people paid for what they did and by trying to be someone completely different he stopped becoming his own man. However, Pride said that was over with and HQ had also cleared his file because they saw how much Pride had changed.