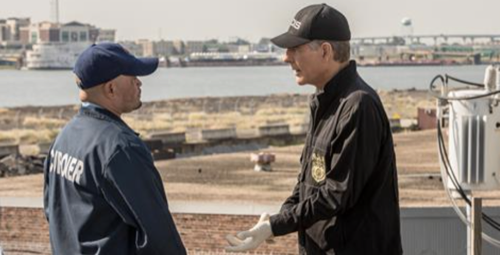 Tonight on CBS NCIS: New Orleans returns with an all-new Tuesday, October 31, 2017, season 4 episode 6 called, “Acceptable Loss,” and we have your NCIS: New Orleans recap below. On tonight’s NCIS: New Orleans episode as per the CBS synopsis, “The murder of a petty officer leads Pride to a mysterious woman who is targeting men with high-security clearance. Meanwhile, Lasalle’s father arrives in town to discuss the family business.”

LaSalle’s father was in town! However, LaSalle didn’t want to see him or even answer his phone calls because he knew his father would say something that would make him upset. So he instead threw himself into work. LaSalle and the others were called to the scene after Petty Officer Sam Segar was found hanging in his apartment. He had been hung as if he had been taking part in autoerotic asphyxiation yet Sebastian proved to be something of an expert on the topic and he said Segar couldn’t have tied himself up like that.

Sebastian told his team that if Segar was going to be doing that to himself that the knot would have been in the front rather than the back because that way Segar could loosen it if safety became a concern. Therefore, someone else had to have been there when Segar allowed himself to be tied like that though whoever it was had gone to great lengths to hide their tracks. The whole apartment had been wiped down and there hadn’t been anything on Segar’s phone indicating he made a date that night.

Yet, Patton had also checked Segar’s internet history and had come across as several sites he used. Segar had been into autoerotic asphyxiation and he would frequent sites where he could meet women that were into it as well. So Patton found out Segar had been pursued by one woman and that she disappeared off the site within hours after his death, but somehow their suspect managed to erase all traces of herself on the site and Patton hadn’t been able to find a picture of her. Which was unusual for him.

Patton had once told the team that no one could ever truly delete something off the site and so he had been forced to go back on his word because of this one woman. He said he had never seen anything like it and so Gregorio had been asked to profile what they knew. She said their suspect was technically sophisticated and that she was smart she would already be on the run. So Gregorio hadn’t been able to tell him much and the others hadn’t had anything to add. Percy said Segar had grown up in foster care and that he had put down Lt. Commander Willis as his next of kin.

Willis had been in San Antonio when he got the call. But he hadn’t been a blood relative and had more or less adopted Segar as a younger brother when they were growing up because they didn’t have anyone else they could count on. So Willis knew Segar better than anyone and he still didn’t know who the mystery woman was or why his brother had been killed though NCIS later believed they found a possible motive. They had used the site that both Segar and the victim used to tap into the photo access the suspect gave them.

Her name was Chloe Miles. She had given the site her real name and that wasn’t the only thing she gave them when she handed over the privacy of her phone. Chloe it seems had also taken a lot of photos. She had photos with Segar which proved they saw each other on more than one occasion and she had photos of herself with other men as well. They were Taylor Cotton, Jackson Holt, and Kevin Chung and they had seen her on the days they died, too. So Chloe Miles was shaping out to be a serial killer and luckily phone gave the team her location.

Chloe had stuck around in New Orleans and they had found her at her hotel. Though she hadn’t been nervous to see them and had given them her DNA easily enough. So they ran it against the small amount of DNA they found on Segar body and it had surprised them all when it came back negative. They knew they had their woman the moment they met Chloe and the fact that her dates tend to die under mysterious circumstances more than proving she could have killed Segar as well however NCIS had had to let her go.

There was nothing to hold her on and they didn’t even have a motive for Segar’s death. Except they did a possible motive for why she killed the other three. The other men had all been contractors for various government agencies and that meant Chloe could have killed them because of what they knew. So she was either very curious or everything she did was an act of espionage. And so the team didn’t know why she killed Segar because he wasn’t a contractor and she had killed him near an NSA site like she did the others.

So Sebastian told them that the nearest site to New Orleans was San Antonio and Segar hadn’t been based there. His brother on the other had just left San Antonio to come to New Orleans for his Segar’s memorial and so Chloe had targeted Segar to draw out his brother. But NCIS had gotten to Willis first and they made stay behind while they sent LaSalle in his place. Therefore, Chloe later met LaSalle at the memorial and she tried to use her wiles on him. She told him about how she lost her father and knew what he was suffering from, but she hadn’t lied about her father.

He was Captain James Miles and the real Lt. Commander Willis recognized him. He said he and the other agencies had been part of an operation in South America and unfortunately things hadn’t gone as planned. So Chloe had lost her father because of that mission and she eventually kidnapped LaSalle because she wanted to know else was involved. Like the people that signed off the failed mission and that was something only the real Willis would know. He held the last part of the encryption the other three had given up and he hadn’t wanted to hand it over.

Willis said that he could risk the many agents in the field. So he was going to let LaSalle die until Pride had convinced him that they could get the list back in time and so Willis gave Chloe what she wanted. He ensured she got the list and the others got LaSalle back. However, while LaSalle’s condition hadn’t been the best, they were able to stabilize him and quickly move to the scene where Chloe was trying to load the operation. She had merely wanted to tell the world that her father hadn’t died a drunk and had instead been a hero.

Only she was going about it the wrong way and so NCIS had to stop her. They cut the power to the hotel and stopped it from going public, but they made sure they took Chloe alive. So LaSalle did have time to make that face to face with his father and he told him that he wasn’t going to leave his job or join the family company under any circumstances because he liked his life even if his father did.