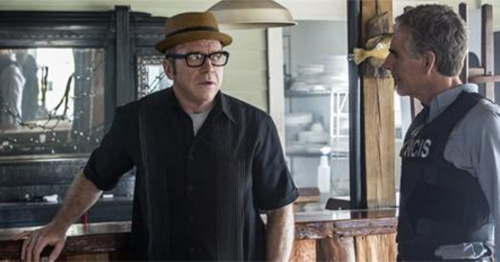 Tonight on CBS NCIS: New Orleans returns with an all-new Tuesday, 7 February 2017, season 3 episode 13 called, “Return of the King,” and we have your NCIS: New Orleans recap below. On tonight’s NCIS: New Orleans episode as per the CBS synopsis, “The team search for a group of underground hackers led by Elvis Bertrand after thousands of classified government files are stolen. Meanwhile, Sebastian (Rob Kerkovich) joins the team as an NCIS Special Agent.”

Sebastian had passed his exams and that meant he was now an official member of the team. But Sebastian had been so enthusiastic about the job that he had sort of cheered when NCIS had been told about a dead sailor. So Sebastian still had a few things to work out and one of them had been sensitivity however their dead sailor had been the only thing they had to worry about. The dead sailor had been Lieutenant Annabelle Shaw and she had been working with a private contractor at a federal servers’ farm which was where the government stored their data. And so Shaw had been in a federal facility when a gunman broke in and killed everyone inside.

So the facility had been breached by an unknown which had been worrying to the DOD and DOJ yet they had at least calmed themselves knowing that it would be hard for whoever to break in to gain access to those very same files. Shaw and the private contractor had gone to the farm to sure update software and create an impregnable security around the sensitive data. And so the departments had no reason to doubt that their files were safe. However, they hadn’t known who they were dealing with because it turns out they had been robbed by the Collective. The Collective was a hacktivist group that believed a world without secrets meant no corruption.

Though what the made group a frightening enemy had been the fact that the group didn’t care about money or anything that would remotely boundaries. So they had released some of what they had and prominent members all across New Orleans were suddenly being outed for affairs. And that included Mayor Hamilton. Hamilton had slept with several members of his own staff as well as a few women that could be hookers yet all the same that had made Hamilton want revenge and so he offered Pride a partnership. Hamilton had told the other man that they both wanted to stop the Collective and that he had resources that Pride didn’t.

Pride however had agreed to the partnership and had failed to tell the Mayor how the Collective got his hands on those files to begin with. So Pride’s temporary arrangement hadn’t compromised his principles and he had merely wanted to use whatever the Mayor could offer. But Pride had later gotten word from Sebastian that someone had previously tried to hack into the farm and that same IP had been recently been used. And so what Pride was willing to do to find Shaw’s killer hadn’t mattered in the long and he had gone to the site that Sebastian had directed to him to believing he could finally close the case.

Only he had been wrong. Pride hadn’t run into the Collective because they had already jumped ship and so all he found was Elvis Bertrand. Elvis had also been looking for the Collective. He said that their leader had compromised what the group was supposed to stand for and had revealed that he knew the leader. So Elvis confessed that he had been the one to start the Collective and the man that was spitting on his work had once been his protégé – Ethan Beck. Which matched what Sebastian had found. Sebastian had found blood at the crime scene that hadn’t matched any of the victims though it had come up as a DNA match for Ethan.

So Elvis had suggested working together and Pride had agreed. Pride hadn’t been able to rely on Patton because Patton was out of town at a conference and so he had needed someone to fill that spot. Though Elvis wasn’t exactly on the up and up. He was a criminal after all and so Gregorio had treated him like a criminal with the only exception being the time she had threated bodily harm if he didn’t top fliting, but that had only made Elvis even more interested in her and so he kept flirting when he wasn’t tracking down members of the collective.

Elvis was trying to find the members as a way of getting to Ethan and so he had thought that they could use Aviva who was a misguided woman to hack Ethan’s computer. But Ethan had set up security for himself if anyone should try to hack him and so Elvis’s plan had backfired. Ethan had found out what he was doing and he had hacked the office. So Ethan had warned them away and told them they should be prepared for the consequence if they didn’t stop trying to find him however Pride had had a moment to ask Ethan during his rant about the four people that died and Ethan had seemed confused.

He had said that the team were liars and so he went ahead with his revenge plot anyway. However, his revenge had a remarkable way of dividing the team. He had sent them all each other’s emails and so they ended up seeing some of the horrible things their coworkers had said about them. So LaSalle, Percy, Gregorio, and even Sebastian had all gotten hurt. Percy had found out that LaSalle hadn’t wanted her on the team and she also seen the email that Gregorio wrote in which Gregorio thought she and LaSalle were sleeping with each other yet Sebastian had found out that Pride had thought he was inexperienced and not ready. And so Sebastian later tried to stay away.

Sebastian had actually stayed with Wade at the morgue for a while until Pride had talked to him and had explained that there had been a second part to the email in which he said he couldn’t have a better person that Sebastian at his back. Yet, the others had still been mad with each other and finding Ethan eventually dead hadn’t lighten the mood. Ethan had been given heroin to make it seem like he had overdosed on his old drug though Wade said he couldn’t possibly have injected so much and to be fair the suicide letter had looked fake. So the guys couldn’t understand why the farm had been broken into or why five people were dead until they found the ink.

Sebastian had found tattoo ink at one of the crime scenes and he said that it was expensive kind called chimera. So Sebastian looked into who would carry that and he found a parlor that seemed fine, but he had asked to see the back and had across a young man concealing a gun. Though the other guy had noticed the moment Sebastian began acting funny around him and he attacked Sebastian before making a getaway however the guys were able to find out who he as. He was Damon Yang. Damon’s father was once a leader in the Triade and their whole family business came crashing when Damon’s father was arrested by the feds.

But Damon had latched himself to the Collective as a way to get his hands on the government data. His father had apparently been sent to a blacksite and so Damon had done what he did in order find his dad though he thought he could find him through the federal agent that worked the case and lived in Louisiana. So once they figured out who Damon was, NCIS were able to an agent’s life and they had stopped Damon before he could make it to his father. Which wasn’t bad despite what they were all going through because of those emails. And so that gave Elvis an idea. He later gave them a peach others’ emails as a parting gift and that had only been good things they had said about each other.