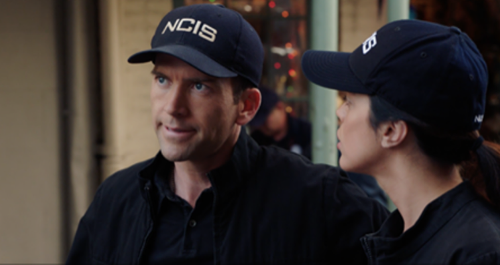 Tonight on CBS NCIS: New Orleans returns with an all-new Tuesday, May 9, 2017, season 3 episode 23 called, “Down the Rabbit Hole,” and we have your NCIS: New Orleans recap below. On tonight’s NCIS: New Orleans episode as per the CBS synopsis, “Pride is spotted tracking one of Mayor Hamilton’s accomplices, who then opens fire on a crowded street before disappearing.”

Pride chose to sit on Stone. He had had information that could tie Stone to a murder and even bring justice to one of their own however Pride had wanted to leave Stone unencumbered because he had wanted Stone’s dirty dealings to lead him to Mayor Hamilton. But in the weeks after Pride had made his decision, Stone had played it safe. The bodyguard/ fix-it guy had followed a routine and hadn’t done anything seemingly out of the normal until one day he went to a warehouse. The warehouse wasn’t anything special and Pride’s team didn’t think it held anything valuable against their intended target.

However, Pride had ordered them to continue with the surveillance because he wanted to get the Mayor so bad that it was blinding him. So Pride and his team stayed on Stone to the warehouse and after the warehouse yet they made the mistake of getting caught. Stone had spotted them in his rearview mirror and so he chose to fight them out in the open. Stone got out of his car on a busy street in the Quarter and he started shutting. He first tried to aim at Pride and then he noticed that Pride was more concerned about the civilians around them so Stone started to shoot into the crowd to draw Pride away.

So unfortunately, that worked. Pride couldn’t keep going after Stone with people injured and so he gave up on capturing the other man in order to tend to the wounded. Yet, Pride still got in trouble somehow because the Mayor later held a press conference in which he blamed NCIS for what happened in the Quarter and demanded that they brought to heel before anyone else was injured so that turned the tides. There were suddenly reports afterwards that repeated what the Mayor said and agreed that something should be done about Pride’s team. So Pride’s boss either saw or heard what happened and he took Pride to task.

The Deputy Secretary told Pride that he was out of line and that he needed to give up on what looked like his personal vendetta. But Pride tried to defend himself. He repeated that the Mayor was dirty and that he was close to getting something on him yet his boss didn’t want to hear it because Pride had been saying the same thing for months without proof. So Pride had been told to calm down because the agency didn’t want to lose him and, while he tried, Pride couldn’t just let things go. He had his people continue with the investigation and they found something. They found out that several DC dignitaries were coming to town and that they were all meeting the Mayor.

That meant whatever the Mayor’s end game was with Clearwater was soon going to be revealed and man like Pride was smart enough to see the opportunity. He knew that if he could find a way to listen in on that meeting that everything would be clear so he asked the Mayor to see him. He said that he wanted a truce though what he wanted was the opportunity to get close enough to put a listening device into the Mayor’s jacket without the Mayor knowing it. So Pride started a fight. He had attacked the Mayor and had told him that he was going to arrest eventually. Yet, it was all part of his plan to hide what he was doing and so the plan worked in the end.

The Mayor had just thought that Pride had lost it and he had told Pride that his career was official over for attacking him. Though all the same he left to go to his meeting with the bigwigs and Pride as well his team got to overhear the meeting. The meeting was about possibly building a Naval shipyard that would bring a lot of money into the city and would raise the Mayor’s profile for when he ran for say Governor. So the shipyard which he wanted built in Clearwater because of its location was perfect for the Mayor, but it didn’t sit well with Congresswomen Michelle Angelou. She apparently thought the Georgia location would be better and she was set it.

She said that there were still over two thousand people living in Clearwater and that they wouldn’t be able to evacuate them in time to break ground. But the Georgia location was already cleared and no one was had to be relocated so the congresswoman refuse to change her mind on the matter. She knew that New Orleans wasn’t right for the project and it unfortunately became clear that she was the target. The same target that Pride and his team had heard Stone talking about on the video because he had been arranging a hit on her with his men. So Pride had had his team watch the congresswoman as he had Sebastian on figuring how she was supposed to be murdered.

Though it hadn’t actually taken Sebastian long to put everything together. He had gone back to the warehouse and the one thing he found that hadn’t been wiped down with the bleach was a fish tank however the chemicals he found inside of it was called Red Tide. Red Tide was algae that was considered dangerous to eat and it was found in oysters. So that combined with the congresswoman’s itinerary showed that she was going to be poisoned when she went to the Oyster Bar for lunch with Vice Admiral Thompkins. So Pride thought he should warn the congresswoman and when that didn’t he work he then tried to stop the congresswoman from injecting the algae.

So Pride rushed to the Oyster Bar and he drove his car through the venue in order to save the congresswoman’s life, but he received even more bad press and knew that he was going to lose his badge so he decided to take a risk. Pride told the others that the investigation was over and said that he had to do the next part alone. However, Pride eventually called Stone. He had asked Stone to meet him at his bar and there he had asked for the other man’s help to take down the Mayor. So Stone had laughed at that and then he had tried to kill Pride. Except he failed! The bar blew up and a body was found inside, but it wasn’t Pride.

Pride had gotten out of the building in time and he had taken Stone hostage although sadly the Mayor went ahead and killed the congresswoman himself.