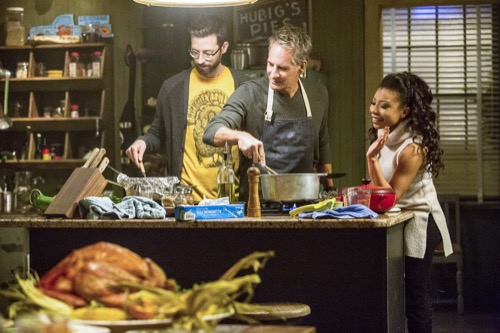 Tonight on CBS NCIS: New Orleans returns with an all-new Tuesday, January 3, 2017, season 3 episode 10 Winter Premiere called, “Follow the Money,” and we have your NCIS: New Orleans recap below. On tonight’s NCIS: New Orleans episode as per the CBS synopsis, “Pride (Scott Bakula) must protect a family member who’s engaged to the prime suspect in the ongoing NCIS and FBI cartel case.”

A bridal shower had unfortunately taken a turn for the worse on tonight’s episode of NCIS: New Orleans”.

The bride had apparently booked a pleasure cruise for her bridal shower and she had been traveling with her girlfriends between South America and the US however, the captain had docked the boat right on the highest drug trafficking route between those two continents. So it had looked bad that the boat docked there and the Coast Guard had had to board the yacht in order to make sure that everything was on the up and up. But the bride hadn’t known why the yacht had stopped on that route and she had been perfectly willing to tell the captain that they needed to move when she came across a crime scene.

The bride whose real name was Eliza West had found no one captaining the ship and there had at least been two bodies below deck. So naturally the Coast Guard thought that the yacht had gotten into trouble though they hadn’t realized that the boat had been owned by Javier Garcia until after they brought it in. However, they had called NCIS the second they had docked and having Pride around proved to be beneficial. Pride was working with the FBI to stop the drug smuggling coming from New Orleans and he like eventually the Coast Guard had suspected that Javier had used the boat to bring in contraband.

Yet, the investigation became personal for Pride. Pride as it turns out, had known the bride since she was a teenager because he had been the one to investigate her father’s murder. So Pride had stayed in close contact with Eliza since then and she had considered him to be her guardian angel, but Eliza hadn’t been just a renter. Eliza was actually engaged to Javier. Eliza had met Javier on what was allegedly a business trip in South America and she had no idea whatsoever that her fiancée was in business with the Cartel. And Pride hadn’t wanted to be the one to tell her though in the end he didn’t have much choice.

The bodies, the missing captain, and the Javier angle meant he had to call in the FBI. But Isler was a stickler for the rules. Isler had wanted to know anyone that was on the boat and had a Javier connection. So Pride had managed to keep him at bay for a few hours though he did come to learn about Eliza and he had wanted to bring her in. Isler didn’t think like Pride so he suspected that the fiancée would know more about Javier than she was letting on and he would have forced her to answer questions if Gregorio hadn’t gone rogue. Gregorio had found the missing crew member and she didn’t to hold off on bringing him in.

Gregorio had held off on bringing him because she had seen Ernesto Blanco moving money and she had wanted to follow him in order to see how the money was laundered. Though sadly for Gregorio, Javier had somehow figured out that the authorities were onto him and he had gave the orders to destroy everything. Ernesto was killed and the money was moved to Eliza’s estate of all places. So Pride couldn’t keep Eliza out of the dark and he had brought Isler to her property knowing that she hadn’t in anyway taken part in Javier’s business.

Isler on the other hand, wasn’t so sure and he had Eliza’s property searched until they found the millions of dollars that Javier had hidden. Yet, Isler had gone the additional step of arresting Eliza and that had made things even trickier for Pride. Pride had looked after Eliza as if she was his own daughter and he didn’t want her to get hurt however Pride came to see that he couldn’t protect Eliza from everything. Eliza had found out that Javier was working with the cartel and she had wanted to help take him down. So Eliza had agreed to take a usb from Plame and it was her job to get that usb into Javier’s computer.

The device was apparently going to photo copy everything and so Eliza had to keep it in the computer as long as possible. However, Pride had wanted to help and so he came by all the sudden for dinner and he bought Eliza the time she needed. So Eliza had gotten everything on Javier’s computer and that was supposed to take him down, but Javier had been too smart. Javier had put all of his business in either Eliza’s name or a relative of hers and so he had created the perfect setup. And Javier also knew how to cover his tracks personally with Eliza.

As it happens Javier was only going to marry Eliza in order to be introduced to New Orleans’s elite and so he had also set a hitman after Eliza once he knew that she had betrayed him. So Javier had Eliza killed, he pinned all of his crimes on her, and lastly he got Gregorio fired. Gregorio’s career never recovered after going rogue because that allowed Washington to at least blame someone for Javier getting away. But Pride had made it his mission to take down Javier and his team bound to back him up. Even Sebastian who killed someone to protect Gregorio on tonight’s episode.