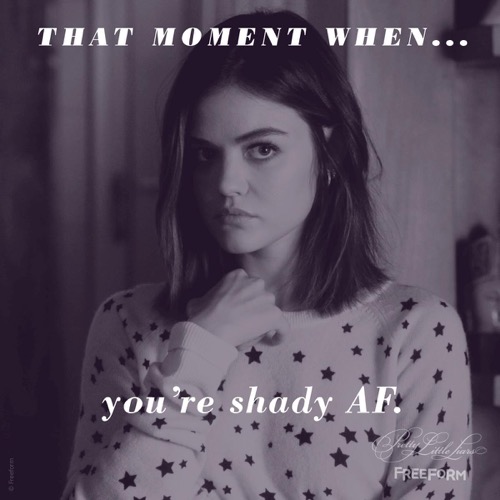 Pretty Little Liars returns to Freeform tonight with an all new Tuesday, June 6, season 7 episode 17 called “Driving Miss Crazy” and we have your Pretty Little Liars recap below. On tonight’s Pretty Little Liars Season 7 Episode 17 as per the Freeform synopsis, “Emily reluctantly teams up with Mona to investigate; Ashley returns to Rosewood to check on Hanna after learning some frightening information and asks Caleb what his intentions are with her daughter; Spencer’s family reels from A.D.’s latest taunt, leaving Spencer more confused than ever about who to trust.”

Ezra and Aria are at dance class. Class ends. Aria is quiet. She has received 3 calls from AD. Ezra leaves to meet his brother. Aria calls AD. AD isn’t letting her off the hook. AD keeps threatening her. She needs to deliver a gift to Ally or a secret she has been keeping will be revealed.

Fury knocks on Hanna’s door. He wants to question her about the flood at the Radley Hotel. Witnesses saw her and Caleb there. Caleb comes out of the bathroom. Fury has questions for him. He tells them that evidence has surfaced.
Spencer is packing her things since her parents are selling the house. Emily is there helping her. Hanna texts Spencer. She wants to play the game and get it over with. Mona shows up. The others are mad. Mona and Hanna explain that Mona can help.

Caleb runs into Hanna’s mom as she is getting off the elevator. She wants to know what is going on with Fury. She also wants to know if Hanna is in trouble.

Aria brings food to Spencer’s for her and her family. While Spencer packs, Aria looks around and plants a phone. She leaves, blaming a frantic Ezra. A recording about burying a dead body plays loudly throughout the house. Spencer and her parents look to find the source. Her father gets angry, yelling about letting crazy people into the house. He heads out the front door. Spencer and her mom stand and listen to the secretive recording. Spencer’s mom isn’t out there. All 3 of them talk in the kitchen.

Mona tells Emily she knows who the doctor is that inseminated Ally. Meanwhile, Hanna is nervous her mom knows about what she did at the hotel.

Mona and Emily sit at the doctor’s office, pretending to be a couple who wants a baby. They bring up Ally’s name as a referral. He gets nervous. He tells them they need to find another doctor. They leave and get his home address off of a magazine.

Hanna goes to find the shovel they used but learns that it has been confiscated. Meanwhile, Spencer finds the phone and the recording in a box from the night before.

Aria and Spencer whisper on the phone to one another. Ezra is in the other room. She gets off the phone. He asks her what her coldness is about.

Spencer is headed to her car. Fury shows up. He has more questions.  Spencer shuts him down by threatening him with their relationship. He leaves. She gets in the car. There is someone in the back. It is her biological mother. She makes her drive to a motel. Spencer’s mom has a flashback to a time when she was told by Spencer’s dad that she would never see her daughter again. She explains to Spencer that the pills that killed Jessica were meant for her. She was cheated out of so much. She offers Spencer a place to stay, to get away.

Hanna arrives home. She is ranting and raving to Caleb when she learns that her mother has shown up, she is in the bathroom. She comes out to see Hanna. She brought wine, Caleb ordered dinner. Hanna’s mom wants to know where Emily is and why Caleb is staying there. Hanna wants her mom to stop asking questions, but Caleb wants to answer. He tells her in front of Hanna that he wants to marry her daughter. They toast to the announcement.

Aria is having a bad dream about getting married in prison. Mona is the guard. Aria watches as Ezra gets beat up. She wakes up on the couch next to a sleeping Ezra. She gets a text from AD. Her reward is downstairs. She searches around.

Mona and Emily go back to the doctor. They threaten him and get the donor’s id number. Spencer comes home to see her parents holding a note that was from Mary to her. Her dad is mad. He tells her he did what he had to. Her mother tells her to unpack. She can’t take the senate seat. It will just get taken away from.
Aria spots a piece of paper under a chair. It is a puzzle piece. Mona sees her from a distance.

Hanna meets Caleb out in the woods in a tent. He wants to be off the grid, it’s safer right now. He tells her everything he said was true. He would marry her right now. He gives her a fake ring. Meanwhile, Spencer meets Mary. She tells Mary that she isn’t going with her. Her friends need her. She tells Mary to forgive herself. She leaves and hears a noise.

Aria puts the puzzle piece in the game. She gets the grand prize. Emily is waiting for Mona. She gives her a piece of paper. Mona tells her it has been a long day and sends her on her way. Mona steps into her apartment and locks the door before she heads to her office. All of the paperwork on the walls and a picture of the game exposes her as AD!