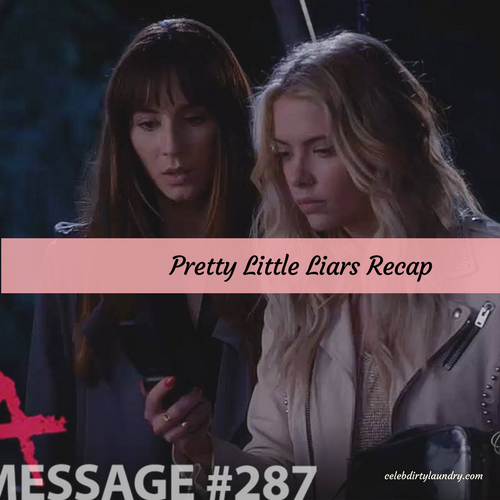 Pretty Little Liars returns to Freeform tonight with an all new Tuesday, April 18, season 7 episode 11 called “Playtime” and we have your Pretty Little Liars recap below. On tonight’s Pretty Little Liars Spring Premiere episode as per the Freeform synopsis, “Spencer learns more about her connection to Mary Drake; Aria and Ezra ponder their future with Nicole back in the picture; Mona helps Hanna get her fashion career back on track; and Emily struggles to balance things between Ali and Paige.”

Spencer is in the ambulance. She is in and out after losing a lot of blood. The girls try to figure out what happened. Toby is brought in on a stretcher.

Aria is packing bags. She is on her way out the door when Ezra comes home. He notices the bags. She tells him she didn’t know how long she should stay. Without a word he takes her bags back upstairs.

Hanna and Caleb are in bed. Hanna wants to look for Jenna. She know she is still out there. Caleb isn’t letting her out of his sight.

Emily and Paige are welcomed back by the school with coffee and a toast. Alison comes in. She just came back from the doctors. She sees Paige and gets upset, leaving. Aria gets a page to meet at the barn. Everyone is there. There is a large black gift box with a message – Get ready to play! Signed A.D. They open it. It’s a replica of Rosewood with a message that says end game. Do they burn it? They decide to sit idle.

Aria wants to throw up. She doesn’t know if Ezra told Nicole about them. Hanna knows he will say goodbye to her.

Alison wants to know what Paige is doing at the school. She is bummed out; pregnant, broke and all alone. Emily tells her she is there for her.

Next day, Mona sits down with Hanna. Mona looks at Hanna’s portfolio of designs. She thinks she should dhow her work off. Mona has an idea. She takes some pics of Hanna’s work and she is off.

Spencer is talking with an officer. He asks her if she recognizes the gun he pulls out of the draw. He tells her that there is a gun missing as well as Mary and Jenna.

Aria and Hanna are talking about the wedding at a little inn. Holden comes in. Aria is surprised. Its his sister’s inn. He gives her a tour.

At school, Emily talks to May about Paige and Ally on the same committee. It’s not a good idea. Paige walks in. She assures May there is no conflict.

Holden asks Aria what plans she has for her wedding. She doesn’t know. Hanna meets with Mona, who wants to introduce her to a friend, a senator’s daughter who needs a dress for a function.

Spencer comes home to see her mom. She explains what happened. How she got shot. She tells her that Mary Drake is missing and how she admitted she is Spencer’s biological mother. Spencer’s mother doesn’t deny it, calling Mary clinically insane.

Spencer and her mother sit down. She begins telling Spencer about how the neighbor knocked on the door one day. She told her that her mentally ill sister was pregnant. She became pregnant by Spencer’s dad, who cheated on her mom at the time. She forgave her husband and they raised Spencer together. Spencer cries and leaves. She can’t take the lies.

Holden and Aria are walking down the street. Ezra comes running up to them. He needs to go to New York, Nicole’s parents called him. Aria tells him to go reluctantly. Holden asks who Nicole is.

Hanna meets with the senator’s daughter. She wants the dress. She thinks Mona is Hanna’s boss.

During the committee meeting, Ally tries her best to make Paige uncomfortable. Emily snaps and tells her to stop it.

Spencer is drinking wine while looking at the gift in the barn. She opens it. Grabs the cellphone on the side of it. Turns it on. The board lights up. She places the phone in the middle. He prompts her to play truth or dare. She chooses dare. He tells her to visit a sick friend in the hospital and get a reward.

Spencer goes to the hospital to see Toby. They hug. She apologizes. He talked to Marco, who told him what happened. Maybe this is finally over. Yvonne is not good. He blames himself. One day they will all get out of Rosewood.

Emily asks Ally why she acted out during the meeting. Ally sees all her memories as lies. Her life is a hot mess. She doesn’t know why she kissed Emily. Emily tells her not to do it again unless she knows why.

Mona visits Hanna. Hanna is mad that the senator’s daughter thinks she works for Mona. Mona never told her that. She calls Katie to clear things up.

Spencer is back at the barn. The board game dings. She gets a prize. It’s a puzzle piece. She fits it in the center and reads the letter that the game spits out. It’s from Mary. She wants forgiveness. Her mother comes in. Spencer is sleeping. She sees the letter lying next to her.

Emily sees Paige in the faculty room. She wants to explain what is going in with Ally. She is going to apologize. Paige doesn’t want to hear it. Ally always plays the victim.

The girls are all upset that Spencer played the game. Spencer apologizes. Hanna wants to break it and see what comes out. The game shows them a video of them digging up Rawlings.