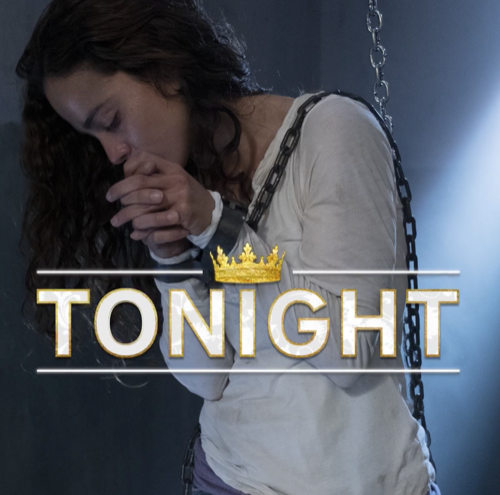 Teresa awakens in a cell with a young girl in a mask who unlocks her chains. The girl tells her to follow her and she will keep her safe. Teresa is taken to an outside arena and finds James and Guero who are also being led by young girls in masks. A large group of men are playing soccer in the arena. The three run away and are chased by the men. They almost get away but are caught by the men. The young girls come to their rescue and take them to meet El Santo. He asks Teresa why she has come. She tells him they represent Camila Vargas and want to do business with him. He agrees but tells her one of them must die. Teresa must decide if it will be James or Guero. If she doesn’t pick they will all die.

Isabella parties with her friends and they decide to take his private jet to Texas. They drink and do drugs on the plane. Teresa tells El Santo that he should kill her instead of James or Guero. Isabella arrives at her mother’s home in Texas and Camila is thrilled to see her. Teresa is taken to an alter where two men are being hung upside down and their blood is dripping into a bowl. El Santo decides Teresa is pure of heart and she will be allowed to live.

Teresa, James and Guero leave with a truck full of cocaine to go meet with King George. As they drive the Captain’s man find them and a gun battle breaks out. Guero is shot and dies. Teresa wakes up at the alter and Guero is still alive. His shooting was just a dream. El Santo gives them the drugs and they leave his compound. As they drive away El Santo tells Teresa she has a traitor on her team.

Isabella and Camilla eat together and Isabella begs her to come home. Camilla tells her she and her father are divorcing. Isabella leaves crying as her mother begs her to stay. Teresa, James and Guero drive the truck to meet King George and the Captain’s men find them and a gun battle breaks out. Teresa and the Captain come face to face and Teresa beats her to death. They escape and continue on to meet King George.

Camilla calls her lawyer and tells him to meet her ASAP, it is an emergency. Isabella and her friends fly back home and she takes the drugs that she refused before. Teresa, James and Guero continue to drive as she is covered in the Captain’s blood.