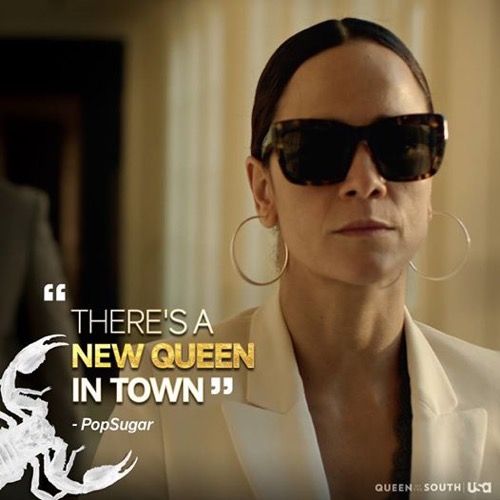 Camilla has a birthday party at her compound where she tells her team that they need to get Devin Finch to agree to work with them. They have to have his help and the team must go to Chicago and start selling their product on his territory. Once his clients get a taste of their drugs he will come to them. If he doesn’t then they will have to force his hand. James worries that an outright attack on his operation is a bad move. She has never had to ask him twice to do something and she doesn’t want to start now. The team head to Chicago.

Teresa’s first meeting to sell Camilla’s drugs at a Chicago party goes very well and she sells their product. Before the team even leaves the party Devin gets a telephone call that Camilla’s people are trying to move into his territory in Chicago. Guero remembers he and Teresa’s first Christmas together. Governor Vargas talks to the press about his joint drug task force as the Colonel tells the task force that Camilla is working with El Santo and their product has already shown up in Dallas. The task force has made a bust of a transport company that they believe is owned by Camilla. They just need proof of her ownership.

Camilla’s team watches Devin’s transportation system and learn the schedule. They see the man who agreed to buy from Teresa earlier at the party. They realize he is going to buy Devin’s product instead and they must do something. They steal Devin’s truck full of drugs and tell the truck drive to call Devin and ask him to call Teresa ASAP if he wants his truck back. James gets nervous and tells Camilla via telephone that the team needs to leave town before Devin strikes out at them but Camilla is adamant she wants to work with Devin. Camilla asks to speak to Teresa to see if she agrees with James but she does not. She feels sure that they just need to wait and Devin will come to them.

Camilla watches her ex-husband on television at his press conference. Devin’s people break into Teresa’s room and hold her at gun point. They demand she call James and Pote to her room. They arrive and all are told they need to go to the airport and be flown to meet Devin. Teresa asks for a guarantee that they won’t be killed but our told there are no promises. Camilla rushes to the hospital when she gets word her ex-husband had a heart attack. With tears in his eyes he tells her he thought his heart would break when he lost her, maybe it has now. Camilla’s team gets ready to go to the airport. Pote tells Guero that it is his fault that Teresa got raped when he left her. He calls Guero a snitch and tells him if he really loves Teresa he will leave and never come back. While it is obvious that Pote’s words bothered Guero he does not leave. As James enters the parking garage to get into their van

Pote tells Guero that it is his fault that Teresa got raped when he left her. He calls Guero a snitch and tells him if he really loves Teresa he will leave and never come back. While it is obvious that Pote’s words bothered Guero he does not leave. As James enters the parking garage to get into their van a truck drives by and men shot at him. He runs but is chased and caught by the Colonel. Camilla calls her daughter to tell her about her father’s heart attack. She is at a party using cocaine and they fight before Camilla can tell her about her father. She hangs up on Camilla and Camilla and the governor fight about how he has not been properly caring for the girl. Camilla tells him that the next time his heart stops she hopes it is for good and she leaves.

James wakes up tied to a post and is bloody. Teresa, Guero and Pote arrive at their van and realize James is gone and that the feds have him. When James refuses to turn on Camilla the Colonel tortures him with electricity. Camilla meets with her lawyer and he has come up with a way to make sure no one finds out that she owns the transportation company busted by the feds. They have sex on the desk.Teresa,

Teresa, Guero and Pote search for James and find him being tortured. Guero goes in and tells the Colonel and the DEA to let James go. They can have him instead. Pote and Teresa start shooting and are able to rescue James and Guero. They run and are able to escape. Camilla leaves her lawyers office as she talks on the telephone to Devin. She tells him she will see him in a few hours and is very excited to begin doing business with him. As she enters her car she is comforted by her lawyer’s wife who accuses her of having an affair with her husband. Camilla tells her she is wrong and leaves. Camilla and Devin meet on the runway and enter his private plane. Guero tells Teresa if he is still on the runway when Camilla gets off the plane he is a dead man. He says his goodbyes. Teresa breaks down in tears as Guero declares his love and leaves.

Camilla and Devin meet on the runway and enter his private plane. Guero tells Teresa if he is still on the runway when Camilla gets off the plane he is a dead man. He says his goodbyes. Teresa breaks down in tears as Guero declares his love and leaves.