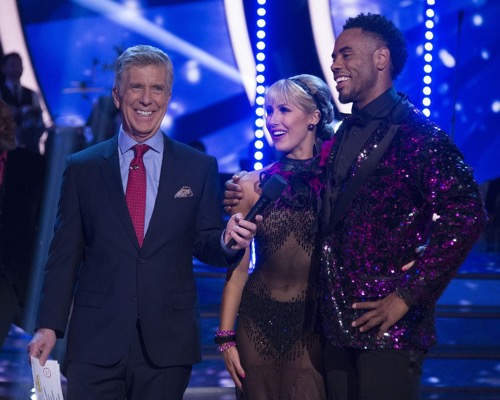 Tonight on ABC the glitz returns to the ballroom as Dancing With The Stars returns for the seventh episode of season 24 and it is A Night at the Movies Night. American football running back Rashad Jennings and his professional dancer Emma Slater took the stage tonight and danced a HORROR themed Paso Doblé to “O Fortuna” by Carl Orff.

On tonight’s episode, the seven remaining couples are presented with an all-new challenge. Each couple will attempt to capture the spirit of a specific movie genre – western, romance, silent films, action, horror, sci-fi and foreign. One couple will receive immunity; the remaining couples will compete in a Dance-Off and a double elimination will take place at the end of the night,

Len: The music was epic and so was the dancing full of passion.  Overall another solid performance.  Mandy: Great Job  Bruno:  What I like is it had a kind of gothic feeling you played it in an operatic way.  Carrie Ann: The story was fantastic you were so into the character you broke the line a bit.  You are incredible you can win.  But, watch your posture.

Watch the video below and let us know what you think, do you agree with the judge’s comments? Do you think Rashad did enough to avoid elimination tomorrow? Make sure to head over and check out all our DWTS recaps, spoilers, news & more, right here.