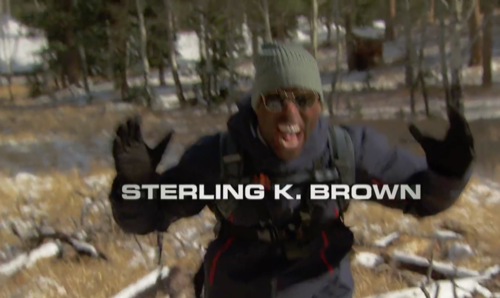 Tonight on NBC their new show Running With Bear Grylls airs with an all new Monday, May 22, season 3 episode 8 called, “Sterling K. Brown” and we’ve got your Running wild with Bear Grylls recap down below. On tonight’s episode as per the NBC synopsis, “Sterling K. Brown joins Bear for an icy journey in Colorado, where they descend a sheer rock face, track an elusive deer and rappel a massive waterfall.”

Sterling walks out into a field, waiting for Bear. They will spend 2 days together in the wild. Sterling has never lived in the country. Sterling was given net in advance. He has never hunted before. Animals freak him out a bit. Bear arrives by helicopter with a cargo net attached. Bear instructs Sterling to climb on to the net. They are lifted into the air. Sterling is excited and in shock. Oh my god, Sterling repeats as he holds tight.

Bear prepares Sterling for a drop off into the wilderness. They arrive on land. “Bring it on,” Sterling yells! Bear will bring him 8 miles into an icy canyon. Its snow and ice across a rocky terrain. Sterling shares that he went to Sterling as an economics major. He has a passion for acting, doing plays from time to time. Two years in, Sterling changed his major. His mother told him to go with god. Spread his wings and make it happen. The two continue to climb and talk. They travel up hill. They hit the top. Bear tells Sterling they need to rappel down 150 ft. Sterling has never done anything like this, he shares. Bear attaches Sterling to his ropes. Sterling is freaked out. Bear spots a deer below. They stop and look. Bear wants to hunt it. They need to be quiet getting down the hill.

Sterling starts his decent, banging off of a few rocks on his way down while the two keep talking to make sure Sterling is all right. He dangles in the air, but Bear has him. Sterling makes it safe. It’s Bear’s turn now. The deer is still there. Bear lands. He wants to make a sniper gillie suit with the net he gave Sterling. They camouflage themselves and make a spear. Sterling wants to know if the deer is going to cry when they kill it. They head through the bushes, staying low. They are 80/90 yards away. They spot it as they move closer. The deer runs away.

They spot a frozen raccoon. Sterling is freaked out. He is afraid of raccoons. Bear tells him that it’s going to be dinner. Sterling digs it out of the snow. He straps it on his back. They walk. Sterling has been married for 10 years. He has two boys. He delivered his first baby at home. He feels a connection to his character Randall. His own father died when he was just 10. They were close and he always knew he was loved. They name the raccoon Ronnie. They start to look for a place to build a shelter for the night.

They find a place to set up a fire and sleep. Sterling is shown how to skin the raccoon. They cut it up and start cooking. He talks about winning his Emmy. He felt accepted by his peers. He loves working on a set, it’s magic. They eat. Sterling thinks it’s not so bad. They go to bed for the night.

They wake up. Its cold. Bear gives Sterling a hat made from the raccoon. They talk about the game plan – they have a lot of traveling to do today. They must drop down a couple thousand feet. Bear puts Sterling on a rope for safety because of the ice. They come to a waterfall. They need to go straight down 150 ft. Bear creates an ice thread. Sterling is terrified. He wants to rappel down off of a tree, not a piece of ice. Sterling thinks he is crazy but he is going to do it. Before they drop down, Sterling shares that he wants to play a bad guy.

Bear instructs him how to make it down the hall. Never take your right hand off the line. They put socks over the outside of the boots for sticky traction. Bear goes first. Sterling goes next. It’s rough, but he makes it. They stand at the bottom. Sterling is happy. They climb aboard a jacked up four wheeler. They rip through the woods and high five.