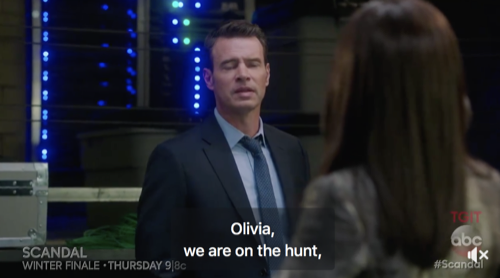 Tonight on ABC Scandal starring Kerry Washington continues with another exciting episode in an all new Thursday, November 16, season 7 episode 7 called, “Something Borrowed,” and we have the Scandal recap for you below. On tonight’s Scandal season 7 episode 7 as per the ABC synopsis, “The first half of the final season ends with shocking revelations and jaw-dropping events.”

Quinn enters the elevator. The power goes out. Someone comes out of nowhere. She screams.

Charlie continues to look through files of unclaimed bodies. Hunk comes in. He knows what they can do to the people who took Quinn – a deathly fidget spinner. Abby comes in. A body similar to Quinn’s has been found in Germantown.

Liv meets with Jake looking for an update on Quinn. He has nothing. She demands he find her.

Mellie is holding a press conference for her treaty. Fitz and Marcus watch. Marcus wants to use her to push their agenda. Fitz laughs.

Charlie waits outside Liv’s door. He cannot go alone to Germantown. Liv tells him that they will find her.

Charlie goes to Germantown. It isn’t Quinn. Abby meets with Cy. He reports to her that Glackland isn’t coming after Charlie. He will let it go.

Cy questions Jake about how he could have confused Glackland to be part of the airplane bombing. He knows something.

Liv meets with her father. He has Quinn, the one person who can take her down. He will return her to his bones. Otherwise, he will kill her. Liv laughs. She calls him pathetic. She tells him that she is in charge and he won’t hurt a hair on her head.

Liv tells Jake. He wants to do something. Liv wants to wait it out.

Marcus stops at the White House to see Mellie. She can’t help him. She dismisses him. Meanwhile, Jake pays Rowan a visit to warn him. Jake reports back to Liv. She isn’t happy Jake went to see him.

One of Liv’s workers calls Curtis. She meets with him at a hotel. She tells him she has information on Rashad’s death.

Liv goes to meet with her mother. She has been keeping her under lock and key in an apartment with a guard. Liv tells her mother what Rowan has done. Her mother tells her to let Quinn die, she knows too much.

Liv’s assistant calls Jake and informs him that it is done. Later that night, Liv wakes up crying.

The next day, Curtis’ face is on the news. He is missing after crashing his car. Cyrus watches the news cast.

Mellie meets with Fitz. Meanwhile, Jake pays Liv a visit to ask her if she saw the news on Curtis. They sit with glasses of wine. Liv tells him she is tired, tired of hiding all of the time. Jake reminds her she is running out of time. She knows, but she cannot let Quinn die. Jake tells her that she needs to kill her father. He tells her she needs to make up her mind and do something – she cannot have it all.

Liv meets with Mellie to discuss her speech. Liv heads to leave. Mellie asks her to stay and enjoy the moment. She got them there to peace.

Liv meets with Jake. He tells her time is up. She heads to her father’s. He aims a gun at her. He wants his freedom. She tells him to pull the trigger. He doesn’t. She calls in a kill order on him. She can cancel it of he wants to hand over Quinn. She gives him 60 seconds. He leaves the room. She hears gunshots. He comes back. He asks her if she wants to see the body.