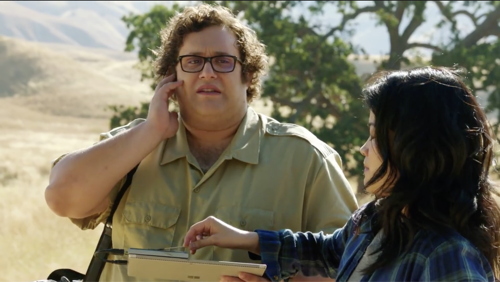 Tonight on CBS their hit drama/comedy Scorpion airs with an all-new Monday, October 9, 2017, season 4 episode 3 and we have your Scorpion recap below!  On tonight’s Scorpion season 4 episode 3 “Poachers almost kill a pregnant endangered deer, so Team Scorpion recreates the animal’s womb to save it and its baby’s life. Meanwhile, Happy and Toby discuss the future of their family.”

Sly practices a speech in front of his superhero figurine. A young intern shows up. She tells Sly she drew the short straw and has been chosen to work with him. But if he signs a release form she can have her assignment changed. Sly tells her no way.

Ally shows up at the warehouse. Cabe has been arrested by the FBI and is at the federal court house. Cabe is in trouble after the Collins incident. His new boss has it out for him. Walter heads down to the court to meet Cabe. His public defender shows up. He is 24. Walter brings Cabe back to the warehouse. He wants to know how they came up with $500k to bail him out. They all took from their savings, took out cash advances and sold things. Walt even put the business up as collateral. Cabe is angry. Paige cuts them short. They have a new job and they need to get it done badly because now they are all in debt.

A woman has come in. The rhino species is in trouble. The woman needs their help to stop the poaching, and she also needs to find out what the sub species is. Happy has that information quickly. The woman has made arrangements to fly them all out. Cabe can’t go. He had to surrender his passport. He can stay behind and talk with them by radio and watch Ralph.

In West Africa, the gang arrives. They are brought to a compound that specializes in saving poached animals. They meet a retired general who runs security for the compound. They head out to the field to collect poop samples. Happy isn’t happy. They hear gun shots and locate the poacher. He runs off at shooting a deer. The team tries to save the deer, but they need to get out of their fast. The poacher is most likely on his way back with more men. Walter determines that the deer is pregnant. They decide that they can’t help. Paige demands they try, telling Walter if he ever wants to see her naked again he will find a way. Walt is on it!

The team gets to work building a womb. Walter discharges a weapon by accident when he tells them all that he will defend them from poachers. They call Ralph and Cabe. They found the poachers phone and they need him to decrypt it. Toby begins working on the deer, removing the baby. Paige and Happy assist. It was a success. They start to pack up. The fawn starts to drop in body temperature.

Cabe and Ralph work on a solution to help save the Fawn’s life. They locate a Danish camp that is nearby the gang. Sly and the woman who hired them get into the truck to head back to camp when poachers begin to chase them. The others head to the Danish camp to try and save the fawn. Cabe instruct sly on how to make an explosive out of a gas tank dock tape a knife and shotgun shells. He throws it out of the truck and blows away the two ATV chasers.

Cabe instructs Sly to hide out. He spots a bird he knows and copies their survival skills. They create fake tracks for the poachers but hide a distance away in the other direction, watching the poachers. Meanwhile, the others have made it back to the compound and created a warming device for the fake womb. While Cabe continues to try and save Sly by phone, Ally, his lawyer and Sly’s intern shows up.

Walter leaves the compound with the former military man in charge of the compound’s security. Ralph cracks the encryption and calls the poachers phones. The man Walt is with is a poacher! They pull over and just as the man pulls a gun on Walter, Toby slips into the driver side window and injects the man with a sedative in the neck. He falls over. They both do their best bad ass Cabe impression. Cabe overhears, he doesn’t think he sounds like that.

Sly and the woman make a break for it in the car with the mother deer. They get her to safety in the compound. Meanwhile, Cabe notices that Ralph might have the hots for Sly’s 15 year old intern who baked cookies.

The deer’s heart beat has increased rapidly. Sly calls Toby who tells him he needs to find a defibrillator. Meanwhile, Walt runs straight into a poacher who has a gun pointed as his head as he holds the fawn. He stands up and runs into the poacher, electrocuting him. They all run for it. Sly saves the deer on his own. Everyone is safe. The poachers circle has been brought down.

Cabe tells Ralph he is proud of him. The gang gets home to the warehouse. Sly’s intern is there. Paige finds out Ralph has a crush. She doesn’t like it at all. Meanwhile, Sly’s intern reports back al of her work. She managed to bribe several officials with her cookies.
The team all sit down to watch the live feed of the deer and her fawn bond.