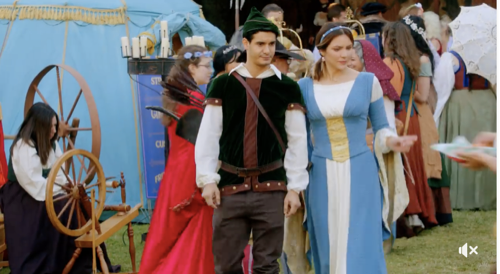 Tonight on CBS their hit drama/comedy Scorpion airs with an all-new Monday, November 13, 2017, season 4 episode 8 and we have your Scorpion recap below!  On tonight’s Scorpion season 4 episode 8 “Faire Is Foul,” as per the CBS synopsis, “For Sylvester’s birthday, Team Scorpion visits a renaissance festival, but the revelry is cut short when a group tries to rob a nearby police evidence locker. Also, Paige grows weary of Walter’s play-by-play of all the festival’s historical inaccuracies.”

Sly and Cabe are in court. Sly is having trouble with the formalities of court – when he should speak or elaborate. He pleads his case. The judge ruled that they will go to trial.

Walt is trying to write a love ballad for Paige after screwing up their date a few weeks back. He asks Happy for help given her experience. Later, the gang gets together. Paige hands out costumes. It is time to go to the Renaissance Festival for Sly. He has VIP tickets.

At the festival, the gang hangs out, going their separate ways to look around. Paige stops Toby. She is concerned. She has to keep giving Walt boyfriend lessons. Toby tells her to hang in there. Meanwhile, Cabe and Walt run into Sly’s friends. They compliment them on their costumes.

A transformer blows and the electricity goes out. Someone sabotaged the festival. Paige tells Walt to fix it. Cabe uses a telescope to look into the distance. He sees the culprits cutting a fence. They are going to rob the place. The team talks about what they can do. They hear gunshots. The robbers have shot the guard. Cabe tells one of the festival goers to tell everyone to leave. Cabe takes his horse. Walt and Toby try to help the guard. The rest of the gang takes off to get supplies.

Toby brings the guard under a tent and puts him on the table. The man is still having pain in his chest. He tells Cabe that the robbers are bikers looking to destroy evidence. Toby cannot stop the bleeding. He uses a hot poker to stop the bleeding. The guy passes out from shock.

Sly and Happy work to make a compositor. They get the electricity back on. They power up the defibrillator to save the guard. They can’t take him off of it until help comes. Or he dies. Traffic is backed up because of the transformer that blew. Cabe comes running to them. The bikers shot another guard. Cabe asks some of the festival-goers for help. They all look scared and decline. Cabe pulls Sly aside. He needs to talk them into it.

Sly gives them a speech. They are all encouraged, yelling huzzah! The bikers come into the area. Paige clotheslines them. The others fail to knock the other man off his bike who is chasing Walt. Walt falls. He pulls out a gun. Cabe comes out of nowhere and knocks him down with a large pole. They fight. The security guard gets off the table and points a gun at the man, who turns quick and holds him hostage. The guard drops again. He needs to be revived. They use a spinning wheel to revive him.

Back at the warehouse, they celebrate with Sly’s friends. Paige tells Walt she loves him for his true self even if they have their troubles. Walt gets rid of the song he was trying to record. Cabe and Sly talk. Cabe has faith in him. He saw what he did today, he can win in court. They all dance, eat and drink.