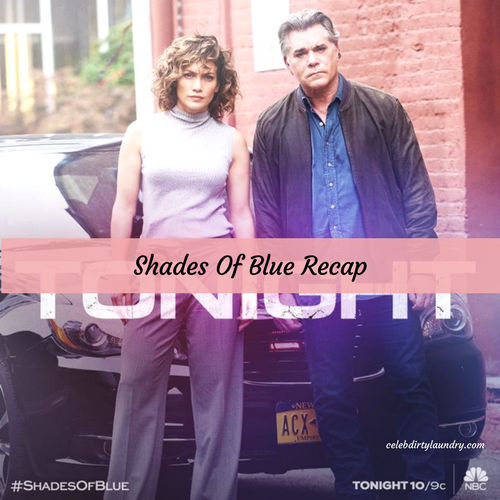 Shades of Blue airs on NBC tonight with an all new Sunday, March 26, season 2 episode 4 called, “Daddy’s Girl,” and we have your weekly Shades Of Blue recap below. On tonight’s Shades of Blue season 2 episode 4 as per the ABC synopsis, “After Wozniak (Ray Liotta) refuses to play ball with the FBI, Stahl turns up the heat on Harlee, (Jennifer Lopez) who lands in the middle of Wozniak’s dangerous plan to free himself from the Feds by reeling in a bigger fish.”

Stahl killed Terrence Linklater. However, it hadn’t been personal. Stahl had simply been offered the chance of arresting Linklater in exchange for giving up his case against Julia Ayres. So he had killed the man that ordered the armored heist as a way to teach Woz a lesson about agreements and how he shouldn’t renegade on them because a friend was supposedly involved though both Woz and Harlee had been surprised by how far Stahl was willing to take things. Stahl had revealed the hatred he had for Julia and Harlee for once had wanted to know if the story about why he hated Julia so much was true.

Harlee had had her own moral code and so she had wanted to know if Julia truly did help kill his partner because she didn’t feel comfortable about someone ordering a hit on a federal agent. Though Woz didn’t have any answers for her and she was a little uneasy about trusting what Stahl had to say. He had burned her once before and didn’t follow any rules or keep any promises. So Harlee had hoped that Stahl was lying and playing one of his little games, but Harlee had gone to him anyways and he hadn’t backed down from his story. He said that Julia had helped killed his partner and that she had done so for her mob connections.

Stahl had told her that he had used to work in the organized crime division and that he partner had been the one to go in undercover. But Stahl had also revealed his own guilt because he said his partner had gotten jumpy and that he had helped him get his head back on straight before sending him back in. So he admittedly blamed himself for what happened next which was his partner later being found with two gunshots wounds and his tongue cut out of his mouth. And so Harlee had wanted to know what part Julia had played in it all yet she was told that Julia had only found out that there was a fed on the inside and that she had never gotten a name.

So Harlee had tried to defend Julia. She said that there wasn’t any concrete proof that Julia had been the one to betray his partner however Stahl had been adamant when he had replied that there hadn’t been anyone else. He had told her that he was sure that it was Julia that had gotten his partner killed and that he had proven by now how far he was willing to go to get her thrown into jail. Yet, Harlee had asked him if he was seeking justice or something else and he had reminded her that sometimes primal instincts take over because he could have sworn that she knew something about that. And she did.

Harlee had killed her ex to protect her daughter and somehow Stahl knew that. However, Stahl was also in contact with Christina and she was helping “locate” her father. So Stahl was finding more and more information to prove his theory about what really happened to Miguel meanwhile Harlee had stumbled onto something herself. Harlee had been given the task by Woz to go collect something for a scheme though she inevitably found out that the scheme was money laundering for the mafia and proceeds went directly into Julia’s coffers for her campaign. And so Harlee had demanded to know what Woz knew.

Harlee had gone to him when he was right in the middle of something. So he had gotten angry and told her that she wasn’t winning back his trust by getting in his face, but she didn’t care about his forgiveness if he was helping the mafia. Harlee had told him that she collected the money like she was supposed to and that she traced it back to Julia. Though when she had asked Woz about it, he claimed that he had no knowledge about what she was talking about and he had been itchy to get back to his investigation. Woz unfortunately had the tendency to take drug overdoses to heart because of what happened to his daughter and so he hadn’t stuck around for Harlee.

Instead Woz had gone back into the interrogation room to “question” the drug dealer that had sold to two teenage girls. But both the ADA and Internal Affairs Detective Verco had been a witness to some of what happened during that interrogation so they were demanding answers. Like why did a drug dealer go into cardiac arrest during a police interrogation and what about the screams? So the entire unit was under suspicion afterwards and, while they did receive good intel, Woz fell apart afterwards. He kept remembering when his daughter had overdosed and how he should have seen the signs so he had gone to see his son.

Woz had just wanted to tell Nate that he was sorry that he wasn’t a better father and that he had missed the warning signs even as his sister was asking for help. Yet, Woz had asked his son if he forgave him and Nate’s reply had been that he wasn’t sure if Woz wanted to be forgiven. So Woz had left things at that and he had later showed up at Harlee’s meeting with Julia. Julia had apparently warned him about what was going on and so she had showed up just in time to stop Julia from revealing anything however he had owed Harlee an answer and so he had told her why he was so loyal.

Woz told her that Nate had found the drug dealer that had sold to his sister and had taken a bat to him though Julia had covered it all up for them.

So the last thing Woz said was “don’t make me choose”.