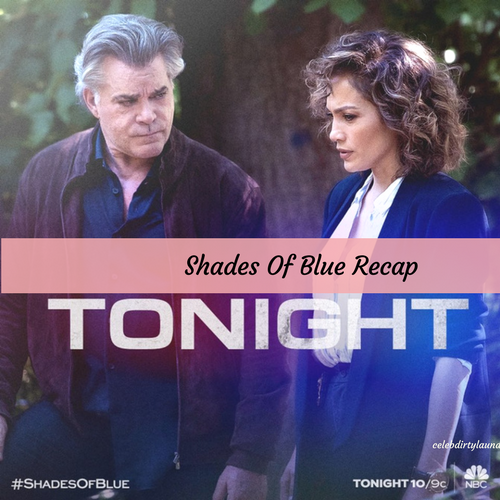 Shades of Blue airs on NBC tonight with an all new Sunday, April 2, season 2 episode 5 called, “Sweet Caroline,” and we have your weekly Shades Of Blue recap below. On tonight’s Shades of Blue season 2 episode 5 as per the ABC synopsis, “The Mafia seeks revenge on Harlee (Jennifer Lopez) by framing her for murder; Wozniak (Ray Liotta) fights to keep his cop family together when evidence of an old crime puts pressure on the already splintering team; and Stahl cozies up to Cristina and gets closer to the truth about Miguel.”

Harlee was trying to be a different person. But when she and the crew raided an illegal passport ring, the money was there for the taking and it had tempted her. So Harlee could have gone back to the good old days and she didn’t. She decided that she was going to finally be honest enough to report the money because she didn’t want anyone else getting hurt anymore however she couldn’t control everything and she forgot about the mob boss that she ticked off recently because Bianchi did make a make.

Bianchi had apparently had Harlee watched until he found a weakness he could exploit and unfortunately it was ADA James Nava. James had had a bad breakup with his ex-fiancée Caroline because Caroline thought they could still make a go of things yet James hadn’t been interested because he was now with Harlee. However, someone had executed Caroline like a pro and then left evidence behind implicating Harlee for the murder. So Harlee was forced to come clean to Woz about everything.

Harlee told him that she had been seeing James for a while and that she had been trying to be discreet about it. Yet, Woz who was surprised had believed that they could solve the problem like they could with everything – by turning to crew for help covering everything up. So he was in for another surprise when Harlee said they could. She told him that the internal affairs detective had found out things he shouldn’t and that there had to be another leak. And so Woz was just been left frustrated because he was starting to believe Harlee would never tell him the truth again.

Though that wasn’t his only problem. Woz had also gotten tired of cleaning up after her and he said so. So Harlee told him that she would to try to figure things out on her own, but Harlee’s first stop had been to Bianchi’s because she thought she could confront him and she couldn’t really make him feel bad about himself. Bianchi had done what he did as a revenge and he had hoped he could sink Harlee when all it did was make her desperate. She was desperate to cover her tracks and sadly that meant hurting James.

James as the ex-fiancée was a natural suspect in Caroline’s murder. So Tess who was lead detective on the case had been forced to go after him and she could also possibly make a case as well. Tess had been told that Caroline hadn’t wanted to end things and that she had gone to see James within hours of being murdered. But Harlee who did know better hadn’t exactly stood up for her man. She let him be interrogated and he had even asked him about the mysterious woman he was seeing now so James had gotten hurt by that.

James had thought Harlee distanced herself from him as fast as she could and so that changed his mind about her. However, Harlee hadn’t known it at the time because she was running around trying to cover herself when James thought that he should end things. So Harlee did make a fool of herself. She stole the bullet used in the murder and she had tried to steal the surveillance tape from James’s apartment when Tess had caught her yet Harlee hadn’t felt comfortable about telling Tess everything and that led Tess to believe that Harlee was covering up for James.

So no matter what Harlee tried to tell her friend about her relationship with James and how she knew he couldn’t’ be the murderer, Tess had just assumed that Harlee was acting stupid because of a man. Yet, that didn’t help things for their friendship. Tess had been accused of being a rat and she had thought that Harlee might have been hiding something she wasn’t aware of though she eventually did do Harlee a favor. She had let Harlee clean the surveillance video and had covered for her to Detective Merkle.

Though Detective Merkle didn’t take being played a fool well. He knew that someone had erased the footage when it came back and there was nothing on it, but he went straight to Woz with his accusations because he said he didn’t know if the unit was corrupt or woefully inept. So Woz made a joke of that. He pretended like they had a string of bad luck and that it seemed to have started since Merkle appeared. And while that was funny, it didn’t mean that Merkle believed him for a minute so he alluded to Donnie.

Merkle said that he was still looking for Donnie Pomp’s secret lover and that things might turn around soon seeing as some of the money that was stolen was recently found. But again that was another of Harlee’s problems. Harlee had given some cash to Caddie and the junkie had been circulating it. So Harlee left a message for Caddie telling to stay low and he had gone to her apartment to tell her that he got a message however he had only found Christina at home. And so Christina who was being watched now Stahl curious about who Caddie was to her mother.

And, despite everything Woz and Harlee did to cover up the mob connection, Harlee still got dumped for not being right James.

Meanwhile Woz tried to get Julia to get the mob guys to back off and just accidentally slept with the woman instead.