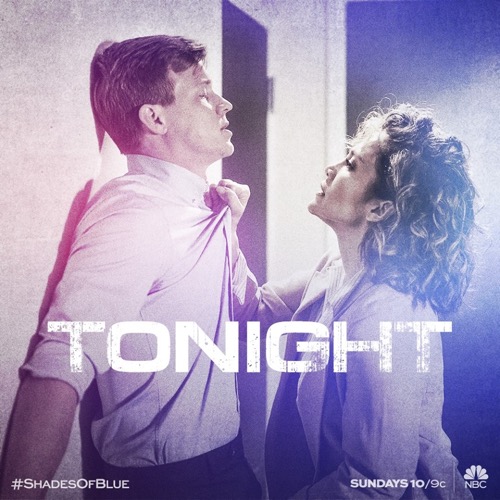 Shades of Blue airs on NBC tonight with an all new Sunday, April 2, season 2 episode 11 called, “The Quality of Mercy,” and we have your weekly Shades Of Blue recap below. On tonight’s Shades of Blue season 2 episode 11 as per the ABC synopsis, “Harlee (Jennifer Lopez and Wozniak (Ray Liotta) lead the crew on a dangerous mission to steal Bianchi’s (Ritchie Coster) secret ledger and take down the mobster once and for all. But the plan takes a tragic turn, forcing Harlee to turn to an unlikely source for help..”

Harlee tried to reason with Woz. She told him that they couldn’t keep piling up the bodies without knowing when it was going to end or what it might lead to however she could later see that she wasn’t getting through to him and so she reminded him about Bianchi’s safe. The one that Eleni had told them about because it was where Bianchi kept everything he had on everyone. But they left the others to clean up after them. Tess and Loman had gone to the crime scene and had arranged things to make it look like Eleni and her partner were a reliability and that Bianchi killed them to protect himself. So the two had done a perfcet job meanwhile it was Harlee and Woz that made a mistake.

Harlee and Woz had gone to the lawyer’s office and they had gotten the safety box. However, they had been seen leaving the building and so they had tried to lie. They said that they worked at the office and that they had come in early yet the young woman had seen right through them and she had figured out that they weren’t who they said they. So Woz had wanted to kill her to keep her quiet and the only reason he didn’t go through with it was because Harlee had more or less stepped in to handle the situation. She had told the eye-witness that it was better for her that she didn’t see them and that it would work out for her if she kept quiet.

Yet, the young woman in question managed to restrain herself for a few hours before she finally caved and admitted to her bosses that she had spotted two people leaving the building with a box. So Harlee and Woz had been had though at the time they had been trying to convince Nava to give them the necessary warrant to arrest Bianchi. They had sold him the story about Eleni giving them evidence and how Bianchi must have killed her and his clean up guy to protect himself except Woz still wanted to kill Bianchi and so he had been going ahead with the warrant as a way to fool Harlee. And essentially stop her from interfering.

So Harlee thought they were going to do things by the book until they were outside of Bianchi’s house and she noticed that no one else was coming. Woz hadn’t called for backup because he had wanted to claim that Bianchi struggled and that he had been forced to shoot, but out of nowhere Verco put a stop to it. He had apparently heard that they were going to make an arrest and he hadn’t trusted Woz to do things by the book. Though by allowing Bianchi to live, the IA detective put Harlee’s daughter at risk. Cristina had gotten tricked into leaving school early and so Bianchi’s men were using her to get to Harlee.

They told Harlee that would hurt Cristina if Bianchi wasn’t released however Harlee couldn’t release Bianchi. He had gotten taken by organized crime and they weren’t going to let him out of their sight especially as he was known flight risk. So that left Harlee with little options and she felt she had to go to Woz despite what they had told her on the phone. She knew she needed help so she showed Woz the video and he had notified the crew. But to rescue Cristina, they had figure out where she was and they couldn’t tell what train she was on with the video so they tried finding her by using the people around her.

For example, there was a young woman that got off the subway the same time she did and she was wearing a Hudson T-shirt. So they tried searching for Cristina around the subways that goes to that university yet there were far too many of those and they didn’t know how much they had. However, they did get lucky because they had noticed that Stahl was in the video and so Harlee decided to put her trust in her. She called Stahl and had told him about the danger that Cristina was. So she asked him to help her. She asked where Cristina and not only did he tell her but he also kept an eye on Cristina for her.

So he had been the one that ensured Cristina went back to school. Yet, bursting Cristina’s bubble about her father as well as following her to the train station had put her on her guard. She questioned why Stahl was so invested in what happened to her much less her case and so she asked him to leave her alone. Cristina said they didn’t need him anymore and that he was creeping her out though that was ok because Stahl got what he came for. Stahl it seems had been the one to trick Cristina into leaving school by pretending to be Miguel and he had only done that because he had wanted a second chance at getting her DNA sample.

Though once Stahl did walk off with Cristina, Harlee and the others moved and they got the man that was following her. So that was one less person that was working for Bianchi and the crew honestly didn’t know whether or not Bianchi would try to come after their families again, but they knew that they would be safer if they got their hands on what was in that safe and therefore Woz took his tools to it. And eventually they found out what Bianchi had on everyone including Verco who was apparently getting his information directly from the FBI.

Which Stahl would have known if he hadn’t been too busy trying to “save” Harlee by stalking her and her daughter.