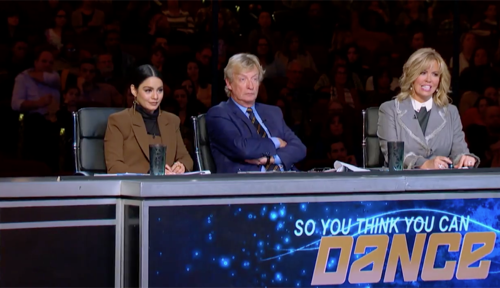 Tonight on FOX their Emmy-Award Winning So You Think You Can Dance premieres with an all-new Monday, June 26, 2017, season 14 episode 3 episode and we have your SYTYCD recap below!  On tonight’s So You Think You Can Dance season 14 episode 3 called “Los Angeles Auditions #2” as per the FOX synopsis, “Auditions in New York, where dancers between the ages of 18 and 30 compete for a spot at “The Academy” callbacks, are featured. Vanessa Hudgens is the guest judge.”

On this week’s episode of So You Think You Can Dance, the cast and crew head to New York to find the next round of talent. Ana from Columbia is up next with her partner. She is 4’11” and fast in her feet like a hot tamale! During her performance, Nigel and the rest of the panel oohs and aahhs. She manages to get a hefty applause. Mary screams with excitement in Nigel’s ear. Vanessa had the best time watching her. Nigel commended her for lifts he has never seen. She is on her way to the academy.

Koine, who was born in Japan, now resides in Florida. She had a hard time accepting her culture growing up. Dance became her second language. She has since embraced her Japanese roots. Her dream is to inspire as many people as she can. Nigel thinks she served up a very professional performance. Vanessa thought she showed so much control and emotion. Mary thinks her audition had so many layers. She is headed to the academy!

Kyle from Connecticut and other show off their hip hop moves. Vanessa can’t help but laugh, making Nigel laugh at her. The panel also meet two dancers from Brooklyn who teach them what Flexing is.

The two hit the stage to show off their impressive dance technique that has Mary clapping and laughing. They get a standing ovation. Nigel thinks they gave them the Beyoncé belly. He calls them genius. Mary that their popping and animation was just sic. Vanessa thought their performance was great. They told a story. Nigel tells Vanessa to make a decision. She is stumped. Mary decides that they are headed to the academy.

Twenty-nine year old tap dancer Chaz Wolcott hits the stage next. Nigel is immediately impressed as well as the audience at his talents. He finishes his audition to cheering and applause. Mary stands up and screams – I love it! Vanessa felt him through his dance. He was eery and effortless. Nigel thinks he had perfect choreography and aligned perfect to the music. Mary lets out a scream. They give him a ticket.

The Bigger Cheese is up next. His name is Darius. He is from Patterson, New Jersey. In red heels and a mink coat, he dances all over the stage while lip-synching. No-one can stop watching as they gasp loudly. Nigel, Mary and Vanessa reject him politely. As he leaves the stage, he yells out – you haven’t seen the last of me!

The judges watch a variety of dancers as they show off their techniques and moves, sending a slew of contemporary dancers to the academy.

Ryan, from Maryland, owns a dance company. He is also a teacher. His contemporary technique is different. He dances to the Dirty Dancing theme song. His technique has Nigel, Mary and Vanessa perplexed. He also manages to show off some lifts. Nigel liked it because it gave him a new perspective on dance. Mary loved it – it was odd! Vanessa thought it was odd too. But he manages to make it to the academy.