BY Sarah Luoma on August 14, 2017 | Comments: Leave Comments
Related : Reality TV, Recap, So You Think You Can Dance, Television, TV 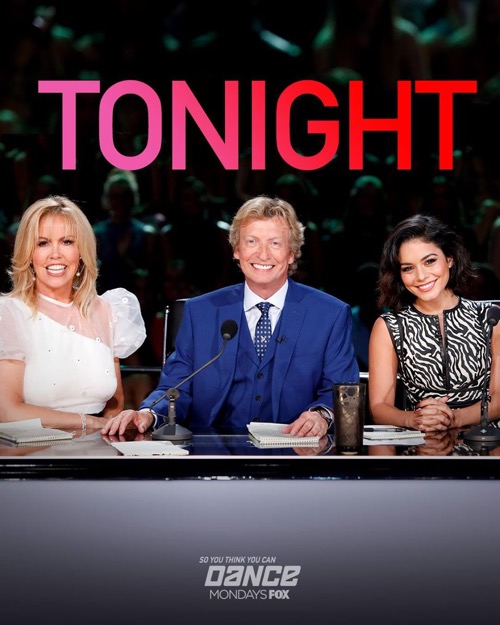 The live show begins with a disco number following Cat’s announcement that 1 person will leave tonight as part of the Top 10 countdown. The Top 10 all come out one by one. Cat reveals that at the end of the show the votes will be revealed. The judges are introduced.

On to the week’s highlights, Mark is like a big kid who is thrilled to be in the Top 10. He and his partner Comfort take the stage to perform to the song Hater. Their dance is about torn lovers. Vanessa thought their routine brought fire and energy. Mary agrees. Mark was intense. She loved it. Nigel thought Comfort was brilliant. Mark was impressive and sharp.

Koine performs the first solo of the night. Logan follows behind her with his solo. The crowd goes wild. Lex and Gaby give a peek at their rehearsals of the week. They are preparing to perform an Argentine Tango. It is a sensual number. They take the stage and dance to Red & Black. Mary saw some awkward moments. She wants them to steam things up a bit. She thought they had incredible choreography. Nigel thought their

Mary saw some awkward moments. She wants them to steam things up a bit. She thought they had incredible choreography. Nigel thought their focus was good. Vanessa thought it was hot.

Taylor performs her solo. Highlights from Kiki and Jenna’s rehearsals are shown.They are two ballroom dancers trying to master a hip-hop routine.

Kiki loses his glasses a lot, but they manage to have fun and learn their routine. They take the stage to the song Caroline dressed in Goth attire. They nail it! Nigel laughs. Kiki was horrible at hip-hop before. But tonight he showed the reason why he made it into the All-Stars. Vanessa thinks their routine was lit! They crushed it. Mary thought that Kiki’s performance was a game-changer. Mary screams with excitement.

Kaylee takes the stage to perform her solo. The crowd goes wild. Paul and Sydney are taken out of their comfort zones as we see them rehearse.

Sydney can relate to the theme of the dance. She too moved from a small town to go after her dreams. They take the stage to dance to Letting Go.

Dassy takes the stage for her solo. She gives a sidekick to finish her performance. Allison and Logan are up next. They show highlights from their rehearsals. Allison is finally feeling better after her injury. Their routine is about a blind date in the future. Logan loves working with her and he loves the jazz choreography piece they are working on. They take the stage in futuristic attire. Logan spins effortlessly.

Allison seems to have recovered from her injuries as she dances with ease. The audience loves them. Cat too! Mary can’t think of anything Logan can’t do. She loved the costumes, the dance, everything. Nigel thinks he is capable of almost everything. Vanessa agrees.

Cat welcomes the Lethal Ladies of Baltimore as special guest performers to show off their step routine. Lex takes the stage next to perform his solo. With lots of flips and moves, the crowd can’t stop cheering. Cyrus and Kaylee show off their rehearsals next. After an average performance last week, this week they plan on tackling hip-hop. They will portray 2 aliens who have been dropped into human bodies. Cyrus plans to bring some heat. They take the stage to I’m Better. They perform perfectly together! The crowd erupts. Nigel loved it. They really did it this week! Stay unique, he tells them. Vanessa thought it was fire. She loved watching Kaylee dance. Mary was scared for them this week, but they did it. They

Stay unique, he tells them. Vanessa thought it was fire. She loved watching Kaylee dance. Mary was scared for them this week, but they did it. They were dynamic.

Taylor and Robert show their rehearsals. Taylor realizes that they need to get over the awkwardness and find their characters. They really need to act and dance with real emotions. They take the stage to perform their 1940’s piece against the backdrop of a starry night sky and street lights. Vanessa wanted to cry watching them. Nigel thinks they are the couple to beat. Mary loved, loved it!

Taylor takes the stage to perform her solo. Marko and Koine give a behind the scenes look at their week. Koine is excited and wants to show the judges another side of them this week. They will be pretending to be insects. Alot of tumbling is involved as alot of swears and laughter. They take the stage in metallic body suits and instrumental music to perform an African jazz piece.

Their timing is perfect until the end when they have some issues, but smooth them over and keep going. Nigel thinks the dance was great.

Vanessa loved it. Koine was amazing. It was animalistic. It was fierce. Mary thinks it was out of control. She loved the costumes. It was one of her favorite numbers of the night.

Mark takes the stage to perform his solo to Sade. It’s a serious piece for the comic of the season. Robert and Jasmine are back. He is grateful to be her partner. He is shocked that he was Team Jasmine. This week they plan on showing a side of Robert that is vulnerable. Jasmine has to trust that he will be there for her technically and emotionally. They take the stage. Jasmine is at a hotel when he spots her. They are both in the same space in life, lost and sad. They find one another. Cat thought it was great. Nigel loved the dance. He didn’t feel the emotions.

It was tough routine but it was about emotion. Vanessa’s heart hurts. They did something to them. It was beautiful. Mary felt it. The backslide they did was great. The technique could have been better, but they need to keep it up.

Kiki takes the stage in his ballroom element to perform his solo. He is on fire. The crowd loved it. Dassy and Fiction return to show off  their week. Kiki wants to show off a sexy side. They hit the stage in flashy, sequence. Vanessa loved it. It was an amazing routine. Dassy looked like she has been doing this her entire life. Aside from a little fumble they had, it was amazing. Mary is happy. It was a feast for the eyes.
Nigel loved the costumes. He agrees with everyone. It was a great way to end the night.

Cat brings the Top 10 back on stage. It is time for some results. The bottom 3 in danger are: Logan, Sydney and Robert. Cat brings the 3 forward. Nigel says he was shocked at the final 3. They are all such great dancers. Nigel calls Logan safe. Nigel thinks it is a tough decision between the remaining 2. Robert is chosen to go home. Cat calls him amazing. She looks back at his first audition.