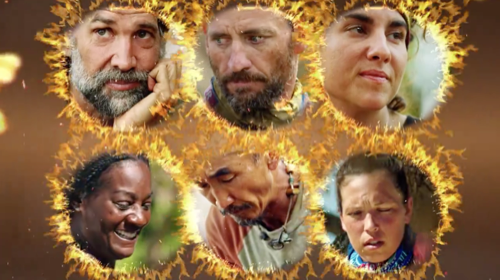 Tonight on CBS Survivor: Game Changers airs with an all new Wednesday, May 24, 2017, Season 34 Episode 14 and we have your Survivor recap below. On tonight’s Survivor season, 34 episode 13 called “No Good Deed Goes Unpunished,” as per the CBS synopsis, “The final immunity challenge is held and the jury votes for the winner, as Season 34 ends.”

The show starts live backstage in Los Angeles with all of the contestants. Jeff announces that first the two-hour finale tape will be shown then the votes will be cast and the winner will be announced. All the contestants will then discuss the show in the live reunion show. Six contestants remain. Sarah has played the game well and she is determined to win the $1,000,000. She has a legacy idol that guarantees she will make it to the final five. Tau has two idols that will help him make it to the end if he plays them right.

Culpepper has no idols left and his only real hope is winning the immunity challenges. Cirie has to use the relationships she has developed to her advantage. She has never found an immunity idol or won an immunity challenge but has been able to win the game before. Time will tell if she can do it again. As the tribe returns to camp talk turns to tribal council and Sarah asks, “Who is the rat?” Cirie wants to know why Sarah turned on Mikayla. Sarah felt betrayed by Cirie and viewed Mikayla as Cirie’s right-hand man but she doesn’t tell Cirie this. Sarah doesn’t know who she can trust.

Cirie realizes she made a mistake by turning on Sarah. She throws Tau under the bus. Tau admits to Sarah that he was the one to suggest Sarah should be voted out. He knows he is in trouble and decides to confide in Culpepper that he has two idols. Culpepper doesn’t trust him and plans to play Tau to his advantage. The group joins Jeff for day 36 and the first immunity challenge. This challenge involves each member racing through a giant maze collecting three bags of puzzle pieces. The pieces will then be used to solve a compass rose puzzle. The winner will not only win immunity but also a huge Italian meal delivered to them at camp.

Aubry takes the lead with Culpepper hot on her trail. Cirie is in third. Troy and Sarah also start working on her puzzle. Culpepper and Aubry are neck and neck completing the puzzle. Culpepper struggles as Sarah makes gains. Aubry falls behind and Cirie has not been able to place a single piece of the puzzle correctly. Culpepper makes a huge gain but is missing a piece of his puzzle. He finds it in his bag and he wins Immunity guaranteeing his spot in the final five. Jeff then tells Culpepper to pick two other survivors to eat the meal with him. He picks Troy and Sarah.

Troy, Culpepper and Sarah agree that they will vote Aubry out. Culpepper tells Tau Aubry will be voted off and he needs to play his idol on himself tonight. He also wants Tau to give him his other idol to hold but Tau isn’t comfortable with that. Culpepper is very intense and Tau doesn’t know what to do. Tau goes to Aubry and tells her everything. They call Cirie over and she wants to join with them. Tau cries and doesn’t know what to do. He realizes no one really cares for him and just wants something from him.

The tribal council begins and Aubry talks about the fallout from the last tribal council. She says they determined that Tau was a rat. Tau points out everyone lied and he doesn’t understand why he is taking all the heat. The time to vote comes and before the votes can be read Tau plays both of his idols: one for himself and one for Aubry. Sarah then plays her legacy idol. Now Tau, Aubry and Sarah are safe. Troy then stands up and the panel of contestants who have been voted off goes nuts. Troy also plays an idol so he is safe. Now it comes down to Cirie going home because Culpepper won immunity during the challenge. In the 34 season history of the show no one has ever been sent home without receiving a single vote but since Cirie is the only one without immunity she is sent home.

The final five return to camp. On day 37 the group joins Jeff on the shore to learn about the next immunity challenge. Each person must use paddles to maneuver a ball through a series of obstacles. If the ball falls the player must start over. The first to get three balls through the course wins immunity. Sarah and Culpepper learn the process quickly. Tau is in a close third place. Aubry and Troy struggle to get started. Sarah drops her ball and has to start over. Culpepper gets his first ball home and starts on his second. Sarah and Troy almost get their first ball in but both drop. Culpepper gets his second ball home. Aubry gives up and just watches. Culpepper gets his third ball in and wins his fourth immunity challenge. He cries with joy.

The group heads back to camp and Aubry is nervous because she realizes Culpepper has never been willing to work with her. She has to make a pitch. Sarah, Troy and Culpepper agree they will vote out Aubry. Aubry tries to get Sarah to turn and vote Troy off. Sarah asks Tau if she can trust him and she asks who he wants to go home. They agree it is Aubry. Tau wants to vote Aubry out but doesn’t like the way Culpepper talks to him. Culpepper demands that he vote Aubry out and it doesn’t sit well with Tau. He gets Sarah to agree to vote Troy out. This will shake Culpepper up.

Jeff asks if anyone has an idol but no one comes forward. The first vote is for Aubry, the second is for Troy, the third and fourth are for Aubry and she is sent home. The remaining four contestants join Jeff on the shore to learn about their final immunity challenge of the game. Each person must race through an obstacle course and then go down a water slide collecting puzzle pieces along the way. Each person must then complete a tower puzzle. The first person to finish wins immunity and will be in the finals for $1,000,000.

Culpepper tells the camera Tau has betrayed him too many times and he will be voted off the island tonight. Culpepper is going to the final three and tells Troy Tau has to go. Troy wants to tell Tau he is going home but Culpepper says no, he wants to play him and wait until tribal council. Tau tries to convince Sarah to vote with him and get Troy sent home. Sarah just doesn’t know how to vote.

The votes are read: One vote for Tau, One vote for Troy. The third vote is for Tau and the final vote goes to Tau and he becomes the final member of the jury. Culpepper, Troy and Sarah make it to the final three and one of them will win $1,000,000. Jeff brings the ten person jury in and tells them they must judge Troy, Sarah and Culpepper based on their ability to Out Wit, Out Last and Out Play.

Zeke talks first and says Sarah really played the game well and he is her champion. Ozzie and Andrea both think Sarah just went too low and hurt too many people. They trusted her and were betrayed. Voting for her would be too gross. Ozzie will be Culpepper’s champion because he played a clean game with little back stabbing. Cirie asks Culpepper how he was able to outlast Sierra but he isn’t able to answer. Several of the jurists again ask Sarah how she could have turned on them when they each felt she sincerely cared about them. Sarah thinks her job as an undercover police office helped her do what she needed to do.

Tau confronts Culpepper and he backtracks on how aggressive he was with Tau. Ozzie makes a speech about what a strong performance Culpepper showed and he deserves to win. Sarah makes a plea and Mikayla argues that Sarah deserves to win because she was just bad ass. Culpepper argues that he doesn’t think that you have to deceive and lie to win. He was himself and it was an honor and privilege to know them all. Sarah says she hopes they can respect her game play and her ability to use her instincts to make it to the point she is at now. Troy says he can see where he stands and is just so happy to have been a part of the game.