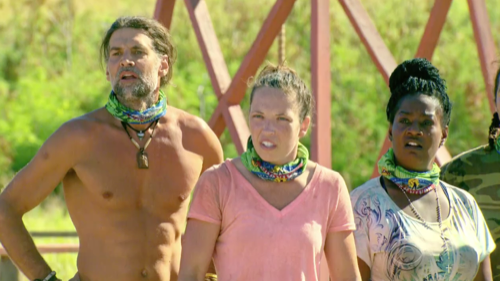 Tonight CBS airs Season 34 Episode 3 of Survivor: Game Changers, March 22, 2017, and we have your Survivor recap below. On tonight’s episode called, “The Tables Have Turned” as per the TV Guide synopsis, “The three tribes learn that two tribes will be sending someone home not just one team as they complete in a classic immunity challenge that sends players flying blind.”

The show begins with the Mana tribe returning to camp and everyone offer support to Tai as they all know it was difficult for him to vote Caleb off the island. He is thankful for their trust. Before they ever get to bed talk turns to Hali being the next person to go.

The tribes met to take on their first reward challenge and only two members of each tribe will compete. The challenge includes an obstacle course and target practice. The first tribe to finish will get everything needed to make coffee back at camp. The second place tribe will get a single thermos of coffee. For Nuku it is JT and Malcolm, for Tavua it is Ozzy and Troy and for Mana it is Tai and Culpepper. Ozzy struggles at the start and Malcolm takes the early lead. Neither tribe can catch up and Malcolm wins for Nuku. Culpepper finishes strong and Mana comes in second.

While Tavua loses the challenge Ozzy feels confident in his performance and that the team needs him to succeed. He goes on to catch several fish for the tribe’s dinner. Sandra still claims her title of Queen and she believes she is running the show. However, the rest of tribe is on the same page that she will be the next contestant to go home if it comes to the vote.

Jeff calls everyone together for the day’s immunity challenge. The challenge involves one player being the caller who guides the rest of the team through an obstacle course blindfolded. As they move through the course they will gather three balls that they then must maneuver in a table maze. The first team to place all three balls wins and will be safe from tribal council. The other two teams will face the vote. All three teams are neck and neck but Mana starts to fall behind. Nuku takes an early lead. JT dominates for Nuku. Ozzy then lands a ball for Tavua but then Nuku gets it second ball in place. It becomes a showdown between Andrea and Varner and Andrea lands the last ball for the win for Tavua.

Both Mana and Nuku will be sending people home tonight.

Before the tribes even make it back to camp negotiations start. JT’s vote is the wild card and all of the team members go looking for an immunity idol. Tai is excited because he thinks he found an idol but it is just a clue that may lead him to the idol. He follows that clue and is able to find the idol. Tai quickly shares the news with his tribe mates. They just aren’t sure who they will need to play it for. At tribe council Sandra continues to be cocky and says she knows she is not going home tonight. Hali and JT are both viewed as wild cards. Everyone starts whispering and finally both tribes get into two circles and chaos breaks out. Both teams go back and forth and then the voting starts.

Malcolm is in shock he was voted off!