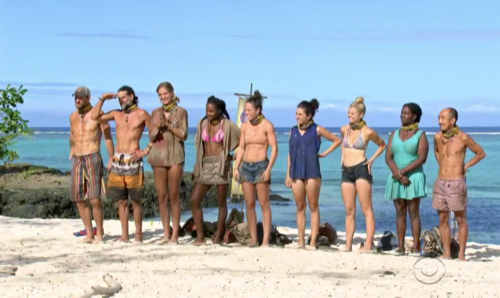 Tonight on CBS Survivor: Game Changers airs with an all new Wednesday, May 10, 2017, Season 34 Episode 12 and we have your Survivor recap below. On tonight’s Survivor season, 34 episode 12 called “It Is Not a High Without a Low,” as per the CBS synopsis, “An emotional reward challenge brings loved ones together and one castaway receives invaluable advice from their special visitor.”

Nine players remain on night 29 of the game. As they return to camp no one wants to talk about what just happened at council. The next morning Cirie tells Mikayla and Sarah they need to break up Culpepper and Sierra. Sierra approaches Sarah to let her know she has a legacy idol that she can play when they get down to six players. She wants Sarah to join her and help make sure she is still around at the final six. Sarah likes the idea.

The tribal members join Jeff on the shore to begin the reward challenge. The winners will get to attend an old fashion BBQ with all kinds of food and a chance to spend a time with their loved ones. Sarah begins to sob and then breaks down when she gets to see her boyfriend and hear about how her son is doing. Andrea gets to hug her mom and her mom is very proud of her. Aubry gets to see her sister and Sierra hears words of wisdom from her dad. Mikayla and her mom have a joyful reunion and Mikayla breaks down in tears.

Troy is thrilled to see his brother while Tau is so happy to see the love of his life. Culpepper and his wife Monica are reunited. He finally understands how hard it was for her to be on Survivor. Cirie had to miss her youngest son’s high school graduation and is so happy to see him now. The challenge involves the contestants being tied together in groups of three and making their way through an obstacle course. They must then go to a table to release a key used to unlock sandbags that will be used to knock down several blocks.

Cirie, Troy and Sierra/ Tau, Mikayla and Sarah/ and Culpepper, Aubry and Andrea make up the three teams. They all start strong but Culpepper’s team pulls ahead. They complete the second task and go to the third while the other teams still struggle to complete the first one. Finally, Tau’s team reach the second task but Culpepper, Aubry and Andrea finish and win the task. They team gets to pick one more person to spend time with their loved one and Andrea picks Cirie. Jeff allows one more survivor to join the picnic with their family and Sarah is picked.

Mikayla is unhappy she wasn’t picked to spend time with her mother and realizes she needs to make a new alliance. The four who didn’t get to spend time with their family decide to join forces and vote out Andrea. They just need to make sure Culpepper will join them at tribal council.

The group meets Jeff to learn the details of the immunity challenge. Each member must balance on a narrow perch while holding a buoy on two handles. The last person left standing holding their buoy will win and be safe at the next tribal council. Aubry is the first one out quickly followed by Sierra. Andrea is out then Sarah. Cirie drops her buoy and she is out. Troy losses his balance and is out. 18 minutes into the challenge and Mikayla, Tau and Culpepper remain. Mikayla drops and now it is between Culpepper and Tau. Tau drops and Culpepper wins immunity and will be safe for another week.

Jeff reads the votes and Sierra gets the first vote then Andrea gets the second vote. Two more votes are read and they are tied with two each. The fifth votes goes to Andrea. The next votes if for Sierra and they are tied again with three votes each. The seventh and eighth votes goes to Sierra and she is sent home. Sierra leaves her legacy idol to Sarah.