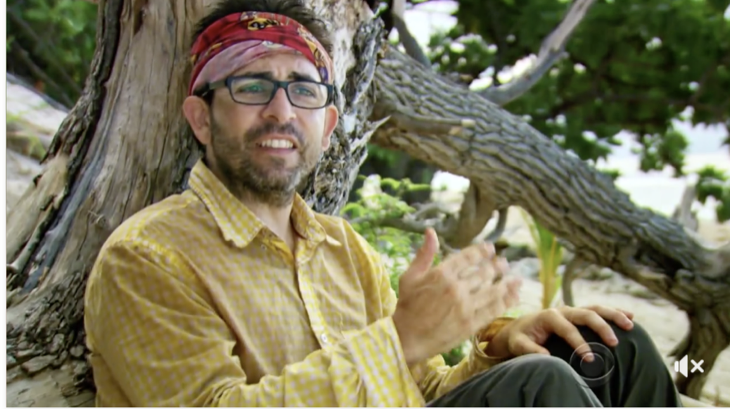 Tonight on CBS Survivor: Heroes vs Healers vs Hustlers airs with an all-new Wednesday, October 25, 2017, Season 35 Episode 5 and we have your Survivor recap below. On tonight’s Survivor season, 35 episode 5 called “The Past Will Eat You Alive,” as per the CBS synopsis, “One castaway struggles to keep his head in the game at a tough reward challenge; and a physically difficult immunity challenge weighs heavily on the players.”

Survivor begins on Night 11 at Levu camp, Ashley is shocked that Joe played the idol. Joe tricked them all and he is getting crazier and crazier, but she says the team is still 2 versus 2.

Day 12 with the Yawa tribe, Ben comes back from washing the dishes and Lauren was busy with the fire; suddenly the bamboo makes a loud popping noise over and over, he goes back to the water, putting him in a bad spot from being in the Marines. He says civilians don’t understand it unless they have gone through it. He explains that his wife and kids have saved him from his demons and his past, and if you dwell in the past, it will eat you alive.

The tribes gather on Day 13 for their next reward challenge. Host Jeff Probst tells them for today’s challenge their feet will be tied together, and arms will be bound to their side, on his go, they will slither through the sand while pushing a ball, relay-style, through the course; when they reach the end, the remaining tribe member will shoot 5 balls into a very high basket, first 2 tribes to finish win the rewards.

The first team to win gets iced coffee, a huge array of pastries plus coffee and tea to bring back to their camp. The second team to finish gets one jug of iced coffee. Losers get nothing. Chrissy sits out for Soko tribe and Lauren sits out for Yawa tribe.

Levu has a huge lead as Devon is already shooting for their basket. Soko and Yawa are struggling as Ryan loses the ball for Soko, opening the door for Mike to finally pass the ball. Yawa is up next, and the door is still open for them to win this; Ryan loses the ball again as Devan gets the second ball in the basket. Ryan loses the ball for the third time and Levu is able to get the 5th ball in. Cole is trying to shoot the balls in as JP drags Ryan to the finish line and Cole sinks the last ball – Yawa wins second place and Soko goes back to camp with nothing.

Desi feels the team can do it, as they showed they can work together. Devon says the reward makes him realize how important it is for him to keep his mind in the game. He thanks them for trusting him but feels Joe is his biggest threat and scares him. Devon talks to Ash about their situation, promising to stick with her because he trusts her; they think they will be able to flip Desi.

In the Soko camp, Ryan apologizes feeling the challenge was an absolute disaster but feels he needs to continue with his social game as it is his everything right now. He worries that his failure will help him get voted out. Roark wants to start developing friendships, so people will start talking “game” with her. Ali hopes that when the merge comes, Roark will keep her at her side and the best thing for her game is to stick with Roark, first to get rid of Chrissy, then JP. Ryan continues to be in a position where everyone talks to him, but he is caught in the middle of Chrissy and Ali.

Day 13 with tribe Yawa, everyone is getting a little bit ticked by Cole’s eating habits, where he will lick the spoon and put it back in the food everyone eats. Lauren hopes Cole will keep digging a hole deeper and deeper for himself. Jessica feels Mike is paranoid about Cole after they learned he couldn’t keep a secret; she thinks she needs to build a better bond with Mike now. Mike goes with Jessica to get water and Mike uncovers another idol, the hidden immunity idol.

The tribes arrive for the immunity challenge. Jeff takes back the idols from Chrissy and Jessica. Today’s challenge they need to swim out to a boat and retrieve three bags of rice, push the rice through a hole and then get it across a balance beam to the shore. They need to rip open the bag and find three balls and then maneuver those balls through a standing maze to the top holes; the first two tribes are safe from immunity and the losing team will vote out the 5th person from the game. Soko picks Ryan to sit out and Yawa chooses Mike to sit out.

Yawa and Soko are neck-and-neck as Levu is struggling in the challenge and can’t get the bags through. JP is the first one across but Levu suddenly takes the lead and Soko is dead last. Joe and Ben are ripping bags open finding the balls. JP carried all three bags for his team. Ben (Yawa) gets the first ball in the spot, their lead continues as Jessica also puts the ball in the hole. Cole is up for Yawa and manages to win immunity while we watch for the second tribe safe from immunity.

Chrissy keeps falling and cannot figure out the beam she needs to stand on, she refuses to give up her spot. It’s over anyway, as Desi wins for Levu and Soko is off to tribal council.

Tonight is Roark’s first tribal council but feels Chrissy struggled in this challenge and needs to go home.

Day 14, Chrissy doesn’t feel safe going into tribal and has a hard time trusting anyone, but she needs to “play big”. Chrissy sits with Roark saying she is the most strategic player in the game and wants to talk out options. She wants to send a guy home and in her head, Roark wants Chrissy to go home since she never spoke to her before today.

Chrissy’s plan is to make an imaginary girls’ alliance. Chrissy talks to JP, who says Roark needs to go since she wants to have an all-girls alliance; then she talks to Ryan about her conversation with JP, hoping they can blind-side Roark and send her home. Ali agrees with Roark when she says they need to keep whittling down the heroes. Ryan knows he is the swing vote and it will be his choice on who is going home and what best advances his game.

Ali confronts Chrissy on not willing to give up her spot on the beam, where Chrissy says she asked repeatedly and everyone told her to try again. Ryan doesn’t defend Ali nor Chrissy. Chrissy is getting criticism from both Ali and Roark, when Roark says Chrissy never approached her before and now Chrissy says Roark could have talked to her too. Ryan and JP both questioned when Chrissy went to talk to Roark. Chrissy says she came here expecting to be voted out. Ali says you can’t have trust in anyone until you are at tribal council; Roark thinks she is the swing vote but not the target, Chrissy isn’t so sure.

The tribe votes and Jeff goes to tally the votes; no one has a hidden immunity idol to play and he begins to read the votes.