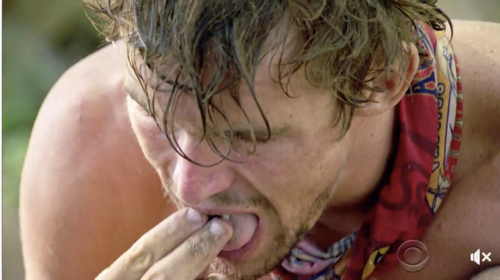 Tonight on CBS Survivor: Heroes vs Healers vs Hustlers airs with an all-new Wednesday, November 1, 2017, Season 35 Episode 6 and we have your Survivor recap below. On tonight’s Survivor season, 35 episode 6 called “This Is Why You Play Survivor,” as per the CBS synopsis, “One castaway gets upset after being kept out of the loop on a crazy blindside; lack of food takes a toll on one player..”

Thirteen Survivors are left, who will be voted out tonight? The Soko Tribe, Chrissy is happy that tribal council went exactly as it was supposed to and feels Ryan believes he can get further with her than with Ali. Ali confronts Ryan, feeling he didn’t trust her but he says she was too close to Roark and that was all it took. Ali feels hurt over being betrayed by him, saying she would have never kicked him to the curb, she cries over it being so rough. She says she is alone now and only wrote down Chrissy’s name because she felt that was what Ryan wanted. Ryan thought he would still be able to work with Ali but after she “railed” into him; he can’t have enemies in the game and thinks she may need to go now.

Day 15 with the Yawa Tribe, Mike says catching a fish for the first time with a spear was amazing and now he feels he can do anything he puts his heart and mind too. He is excited to be able to provide for his tribe. Mike drops the fish into the fire, but Ben jokes that come hell or high water, he was cooking the fish. Ben is proud of him for being out of his element and doing so well. He says Mike caught a small fish and shared it whereas Cole catches a decent size fish and eats it by himself and that shows who you should work within the game. Cole is showing his colors and it is not a good thing.

The tribe is trying to ration out the food but Cole says they shouldn’t cut down the food. When Lauren objects he tells her not to interrupt him as she tends to dominate the conversations. Cole says they should eat big while they have it as Lauren says no one is starving and if Cole wants to eat, he can cook it. Cole storms off saying he isn’t getting enough food, and without a bigger serving he can’t perform his best and without him, there wouldn’t be a Yawa tribe. Mike, Lauren, and Ben talk about Cole, saying he is digging his own grave when it comes to the tribe, as Jessica is the only one spending time with him.

The tribes gather for their reward challenge on Day 15, where they learn Roark was voted out at the last Tribal Council. They need to race out to a set of poles, where they are to use the poles to transport a buoy across a balance beam, that buoy will release their boat which they will pull to the finish, where they will use a giant slingshot to knock down 2 targets. The first two teams will win rewards; Jeff teases them with 10 pizzas and ice cold soft drinks; the second tribe to finish wins 1 pizza.

Yawa chooses for Mike to sit out of the challenge. Soko is way ahead of the other tribes already at their boat but they fall behind when they forget to untie both knots on their boat. Yawa is caught up and they are dead even racing off to the platform. Ashley and Desi are still trying to get across the course while the others are already using their slingshots. JP does it and Soko wins the first reward with Yawa winning second, leaving Levu has nothing and is told to head back to camp.

Ryan says JP is a tank and very athletic, and with the merge happening soon, it raises the threat of having JP around. He is tough to read because he doesn’t talk strategy at all as all he talks about his chicks and bars. Ray feels its amazing that JP is still here because he has no clue that this is a social game. He thinks taking out such a huge threat right before the merge is priority number one.

Devon talks to Ashley about Joe and Desi’s connection; they want each other at the merge and it looks like if there was a tribal council it would be two on two and their hope is to get Desi to flip on Joe. Devon feels Joe is good at finding immunity idols and needs to keep eagle eyes on Joe because he makes him nervous. Ashley learns Desi trusts Joe in that he will stick with them to some point but admits she would vote him out. Desi believes Joe would use her until she is no longer to her advantage and he is definitely the most strategic player out there.

If the Levu tribe is going back to tribal council, Desi is really considering getting rid of Joe at this point. Meanwhile, Devon and Joe continue to walk through the forest. He knows Devon is watching him, but his game is to have power, control and to manipulate. Joe finds a clue, very similar to when he was in the healer camp. He didn’t give Devon a reaction and feels he needs to get rid of the clue so no one knows he will have it. He is determined to get the idol that night.

In the middle of the night, Joe begins to dig by the tree. He says everything he does is for his children. He digs deep enough and is thrilled to find his second idol and promises if he moves onto the third camp, he will find that idol too.

Day 16 at Yawa tribe, Cole wakes up, but as soon as he stands up, he falls face down. Mike rushes over and asks if he is okay, but has no clue what happened. Mike tells him to lay down and give him water; Jessica says she is going to cook some rice for him, offering to give him her portion. They were all scared that he fainted but Jessica and Mike are in the medical profession and are sure he is okay but she realizes in that moment that she didn’t want to play this game without him.

Mike feels Cole became a liability and they need to get rid of Cole. Ben returns and Mike tells him that Cole fell like a tree trunk. Ben and Mike sit alone when Ben says Cole should worry more about his appetite than his 6-pack; Ben agrees he is a liability. It is good he wasn’t hurt but they can’t pamper and cater to him. Ben says if they lose in the immunity challenge then Jessica’s boyfriend is going home. Cole tells Jessica he cares about her.

The Tribes arrives for the immunity challenge and Jeff explains they will each pull on a rope, suspending a disk, they will then work together to stack blocks on the disk, spelling “IMMUNITY”. If at any point they fall off their beam or the stack falls, they need to start at the beginning again. The first two tribes win immunity and the losers will go to tribal council where the 6th person will be voted out of the game.

Soko is the first casualty and needs to start over as Ashley places the 6th block and Jessica right behind her. Both tribes need to start over as Yawa is in the lead with one block left; Cole has placed the “I” down but as he inches back the stack falls and they need to start over. Levu and Soko are neck and neck with one letter to go. Everyone puts the “I” on the stack, Yawa survives first, then Levu is second, as Soko drops the stack, bringing them back to tribal council.

JP feels losing wasn’t a big deal as Ali is the next one to go and there is nothing she can do about it. Ryan feels Ali is the next target but JP is a huge threat and taking him to the merge is dangerous but in order to take out JP he needs to earn Ali’s trust as he needs her for this vote. He apologizes to her, he doesn’t think she is going home. They talk about needed Chrissy to come over and now Ali needs to convince her, after just voting for her. She tells Chrissy she is loyal but Chrissy worries about the merge as Ali promises to put her loyalty in her. Chrissy knows JP is a threat but she doesn’t know if she can trust Ali, she has aligned with Ryan the most and needs to talk to him about who is going home. Ryan doesn’t know why everyone wants to work with him as he considers himself a weasel.

At tribal council, Ali reveals her and Ryan have swept things under the rug and are good moving forward. Chrissy says all four of them want to make it to the merge as Ali says it will influence their vote tonight. JP says traditionally the bigger guys get voted out now and it is scary sitting there right now; you can say what you want but at the end of the day it comes down to what is in the best interest in everyone’s game moving forward.

Ali is bothered that he doesn’t give a direct answer and doesn’t like that no one knows what he is thinking; Chrissy agrees that he is very quiet. Ryan says playing quietly is dangerous and isn’t sure he wants to work with someone like that. The voting begins as JP admits if he gets voted out, it will be a wake-up call to his social game. No one has a hidden immunity idol to play as Jeff goes to tally the votes.

The votes are in: ALI – JP – ALI – ALI. She puts her head in her hands and says, “You’re kidding me!” She grabs her torch and tells them good luck beating JP and hands it to Jeff, who puts extinguishes the fire and tells her to go. Jeff wishes them good luck as they are counting on a merge.