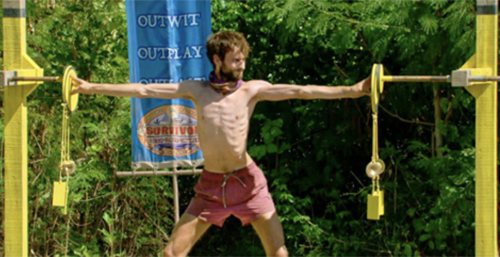 Tonight on CBS Survivor: Heroes vs Healers vs Hustlers airs with an all-new Wednesday, December 6, 2017, Season 35 Episode 11 and we have your Survivor recap below. On tonight’s Survivor season, 35 episode 11 called “Not Going to Roll Over and Die,” as per the CBS synopsis, “The castaways receive a much-needed visit from their loved ones and one player must snatch an immunity idol in plain sight.”

The tribe mates return to camp after Tribal Council and Mike is shocked once again that he was blindsided. Ryan is also shocked and can’t believe he played his idol and didn’t have to – he feels like he is in an awful spot now.

Chrissy tries to tell Ben off about going against her, but he doesn’t put up with it and tells her its a game – she now thinks her days are numbered. Time for the Reward Challenge and it’s a new one – they will be running in pairs but not with each other, with their loved ones. The only way that they can guarantee time with their loved ones is if they are really in sync with them. They are each going to have a bag, inside the bag are two marbles, one black, and one white. They are both going to pick a marble if they match they are in and if they don’t they are out. Its do or die. The last couple left standing wins reward and will take their loved one back to camp where they will have a Survivor BBQ.

Meanwhile, Ben makes a fake immunity necklace to throw the others off from looking for the real idol.

Lauren finds the Immunity Idol, but it’s only half, she has to get the second half at the Immunity Challenge.Time for the Immunity Challenge, for today’s challenge they are going to have their arms stretched out, their fingertips pressed against two wooden disks and if at any point the disks fall, they are out. Ben is the first one out, followed by Chrissy. Ryan drops and he is out. Lauren quits, she says her shoulder went out – but she went to get the second half of the immunity idol. Mike drops and now it is against Devon and Ashley – they make a deal and Devon gives it to Ashley.

Ashley knows she has the numbers and starts talking about voting out Ben because she thinks he is the biggest threat in the game. Meanwhile, Devon believes that Chrissy is the biggest threat. Ben walks up to his alliance and they all stop talking, he knows something is up. Ben confides in Mike that Lauren found the idol. Mike all of a sudden feels like he is back on top. Ben takes Chrissy aside and tells her that he still wants to work with her and tells her that Lauren has an Immunity Idol – Chrissy is going to consider voting out Lauren. Devon goes to Lauren and tells her that Ben is trying to blindside her.

Lauren gives Mike half of her idol, to show him that she trusts him. Time for Tribal Council. Jeff talks about Devon and Ashley making a deal and nobody seemed to mind. Ben says he thought he was part of that. Lauren calls out Ben asks where is the game move when you tell people about her idol. Ben says that is part of his game and he is going after her. Chrissy tells Lauren to rip up the advantage and the target will come off her back. Mike gets up and throws his half of the idol in the fire.

Jeff asks him what is the reasoning and Mike says that an Idol is a curse and a blessing. Everyone just starts getting up and talking, they are debating whether to send home Ben or Lauren. Time to vote. Ben plays an Immunity Idol, any votes for him doesn’t count.

Everyone votes for Ben, there was only one vote for Lauren and she is sent home.