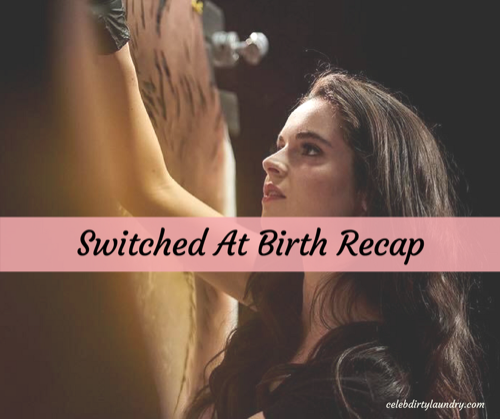 Switched At Birth returns to Freeform tonight with an all new Tuesday, March 7, season 5 episode 6 called “Four Ages in Life,” and we have your Switched At Birth recap below. On tonight’s Switched At birth season 5 episode 6 as per the Freeform synopsis, “Daphne volunteers at a clinic and grows concerned when her medical mentor makes multiple mistakes with his patients; Mingo leads the annual Kangaroo Krawl; Bay finds Noelle is plagiarizing her work; John and Kathryn try to rekindle their romance; and Regina is put in a precarious situation when she decides to expand her business.”

Daphne was doing her best to move on with her life. She had mended her relationship with Iris, stood up for what was right, and she even volunteering at the student clinic to earn credits. But then Daphne found out that she would be shadowing Dr. Jackson at the clinic. Dr. Jackson had been the first person that believed Daphne could become a doctor and he had started out as her mentor however Daphne had jeopardize their relationship when she stole oxy from his clinic and he had been forced to fire her. So Daphne had been shocked when she saw Dr. Jackson again and she thought that the past would ruin what she had going for her.

However, a lot has changed since Daphne and Dr. Jackson parted ways because he said he didn’t hold what she did against her. He said he understood that she had been young and had recently lost her father. So Jackson had come across as someone seemingly willing to let bygones be bygones yet Daphne later noticed something rather concerning. She had been watching the doctor see to a patient and she noticed that his hands had been shaking so badly that he could hardly grip the needle correctly in hands in order to give a young woman stitches before he just gave up entirely and said that the string wasn’t too his liking.

So Daphne had asked Dr. Jackson about that. She had wanted to know if he was ok and he had lied to her. Jackson had said that it wasn’t anything serious and that he merely hadn’t taken his arthritis medication that morning. Yet, Daphne didn’t really buy that explanation and she would have question Jackson’s story further if Mingo hadn’t come into the clinic needing help though Mingo had no one to blame for that but himself. Mingo had unfortunately taken part in “Kangaroo Krawl” which was this binge drinking event on campus and Mingo had told Daphne that he had to win it this year.

Mingo had said that he was a party guy and that it was what party guys do. Though Daphne had been concerned about him. She had thought that he was hurting himself because of what had happened at the costume party and she wanted to help, but other things kept getting in the way like the prescription Dr. Jackson had written for him. So Daphne had talked to Jackson about that and he had said he had written the wrong thing by mistake. And he refused to admit that he made a mistake seeing as he said Daphne should know better than anyone that people could make mistakes.

But both Bay and Toby thought that Dr. Jackson was being extremely manipulative for throwing Daphne’s mistake in her face. So they advised Daphne with coming forward about Jackson however Daphne wasn’t the only one that had a problem on her hands. Bay had found out that Noelle had plagiarized her tattoo and at first she hadn’t known what to do. She had wondered if maybe Noelle hadn’t meant what she did so she talked about it with Toby and he told his sister that Noelle knew exactly what she was doing because artist know better than mess with someone else’s work.

So Bay had tried to be clever. She had confronted Noelle with the truth and more or less demanded her own chair at the tattoo parlor because Noelle must already think her work is worthy of the parlor. However, Noelle of course had some stipulations. She said that having her own chair was three hundred dollars a week and that Bay couldn’t pouch her clients yet Bay had gotten so desperate for the money that she had agreed to do a tattoo for a kid with a fake id and Noelle later heard about it when the kid’s father complained.

The older man had said that he had spent years keeping his son from becoming involved with any of the gangs and that if a rival gang saw the tattoo on his son’s arm that they would hurt him. So Noelle had said that Bay could fix the tattoo and Bay had said it as well though Bay had made the mess she did because she didn’t know what was or was not affiliated with the gangs and was just a rich kid like Noelle had once accused her of. Yet, Noelle later forgave Bay for what she did because she had been in a jam herself when she borrows Bay’s tat and so she was willing to overlook Bay’s one transgression. And so Bay fixed her problem and eventually so did Daphne.

Daphne told Dr. Jackson how much he inspired her and how he could inspire others by applying for the teaching job at the college. Daphne had said that faculty was doing more for the overall diversity and that putting down his stethoscope didn’t mean he had to stop being a doctor. So Dr. Jackson agreed to apply. He was a little hesitant because he thought he was too old to be starting over at his age, but he knew that he needed to stop working on patients and didn’t even get mad at Daphne again.

Though Mingo had been different. Mingo was self-destructing and he thought that he needed something to help get over the fact that everyone thought he was a racist however cheating on his girlfriend wasn’t much help either. So Daphne told them that they couldn’t do it and that had left them without any other options. And so Daphne didn’t know what to do about him however she did meet a young woman that had come into the clinic claiming she had received Angelo’s heart and that had given her some closure she hadn’t been sure she needed.

So who is this woman and how will the others react to her? Regina was finally in a relationship she felt comfortable being in despite what his father thought and that he had tried to invest in the business. But John and Kathryn have had a lot of ups and downs lately and they didn’t need the baggage that came up with Angelo ruining that.