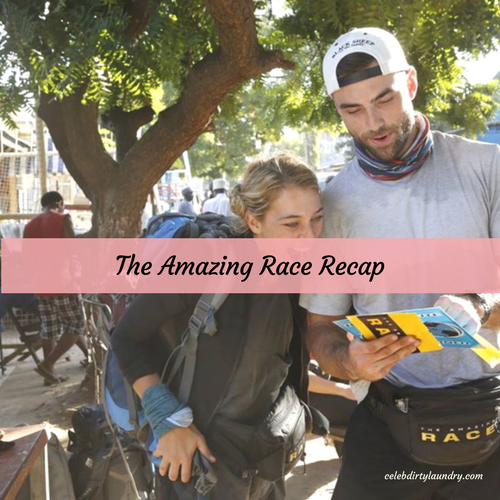 Tonight the CBS series The Amazing Race airs with an all-new Thursday, April 20, 2017, season 29 episode 4 and we have your The Amazing Race recap below. On tonight’s season 29  episode 3 called, “Another One Bites the Dust (Zanzibar and Dar es Salaam, Tanzania)” as per the CBS synopsis, “The race continues in Zanzibar and Dar es Salaam, Tanzania.”

Matt and Redmond confront Ashton and Vanck about U-Turning them but after talking say their rivalry is over. Neither team really believes it. Liz and Michael are the first to leave followed by Joey and Tara. They face their first detour Lock or Knock. In Lock, teams must find a hidden compartment containing a key and then use the key to unlock their next clue. In Knock teams must find and knock on three special doors. At each door they will get a piece of wood that they must turn in for their next clue. Joey and Tara decide to complete knock.

Joey and Tara decide to complete knock. Vanck and Ashton are in third followed by Redmond and Matt. Michael and Liz get complete off task. Logan and Landon and then Brooke and Scott take off in fifth and sixth place. Joey and Tara decide to switch tasks and start checking boxes for hidden compartments. Liz and Michael find their way back to where they need to be and pick the lock detour. Redmond and Matt, Brooke and Scott and Logan and Landon all decide to do lock.

Vanck and Ashton choice Knock but argue as they work. Floyd and Becca are in seventh. Sara and Shamir are the last to start the race. Michael and Liz complete the detour first and head out to their next destination. Joey and Tara change tasks yet again and go back to Knock. Vanck and Ashton continue to argue but find a local man who gives them guidance. None of the teams trying to complete Lock realize there is a hidden compartment. They just keep opening and closing boxes.

Finally, they realize what they are doing and start finding the keys quickly. Redmond and Matt are now in second place.

Scott and Brooke are in third followed by Floyd and Becca in fourth. Vanck and Ashton complete the detour and are in fifth place. Tara and Joey are on sixth. Logan and Landon decide to switch detours and luckily find a local woman who helps them find the doors they need.

All the teams but Shamir and Sara make it on the first boat off the island. Sara and Shamir switch detours and begin to argue horribly. The other teams take taxi’s to their next clue which leads them to a road block. The road block involves creating ladles using metal that they must bang into shape. Joey, Vanck, Brooke, Michael, Becca, Logan and Redmond work on the road block. Brooke cries that she can’t complete the task because she doesn’t have the strength. Shamir and Sara finally complete the detour.

Becca helps Brooke cut her metal because Brooke and Scott helped her on the detour. Redmond helps Brooke make her holes. Joey completes the task first and head to the next pit stop. Becca finishes next. Joey and Tara are the first team to check in and win a $5000 each. Becca and Floyd come in second. Liz and Michael are in third. Michael helps Brooke and she promises they won’t U-Turn them if they get the chance.

Liz and Michael check in third followed by Redmond and Matt in fourth and Logan and Landon in fifth. Ashton and Vanck check in sixth. Brooke and Scott check in seventh. Brooke says she is so thankful for the other teams help. Without them she would not have been able to complete the road block. Phil goes to Shamir and Sara who are still working on the road block and tell them that all the other teams have checked in and they have been eliminated.

Seven teams remain and Joey and Tara are the first to begin this leg of the race. The teams will now fly to Norway. Vanck and Ashton and Scott and Brooke argue as they wait for their flight. All of the teams are taken aback by the beauty of Norway. The teams arrive at the light house and must eat raw fish and again Brooke starts whinnying that she can’t do it. Becca and Floyd finish first and use their fast forward. They head up in a helicopter. Brooke and Scott argue non-stop.

The teams face a road block that involves building a tower using pallets. Matt, Ashton, Joey, Scott, Logan, and Liz take on this road block. Matt and Redmond complete it and are in first place. Teams now must pick between two detours, either walking through town looking for trolls or kayak through town looking for fisherman with a lure with the name of the next pit stop. Matt and Redmond and Joey and Tara decide to kayak.

Vanck and Ashton realize they forgot their packs and head back to get them. Floyd is the first to jump out of the plane followed by Becca. Both think it is amazing. Tara and Joey finish the Lure and finish in first place. Redmond and Matt check in second. Floyd and Becca check in third. Michael and Liz hit a parked car as they head to the pit stop. The damage is minor and the other driver tells them not to worry about it. All the other teams start for the pit stop.