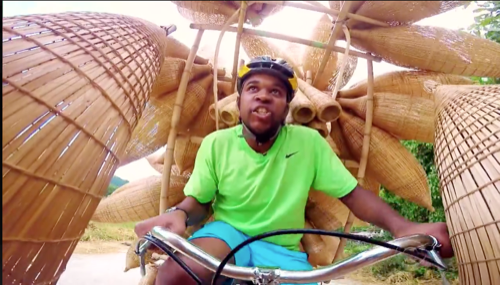 Tonight the CBS series The Amazing Race airs with an all-new Thursday, May 18, 2017, season 29 episode 9 and 10 and we have your The Amazing Race recap below. On tonight’s season 29  episode 9 & 10 called,“I thought we were playing it nice (hanoi, vietnam) / riding a bike is like riding a bike (ninh binh, vietnam)” ” as per the CBS synopsis, “An extreme fear of heights paralyzes one Racer at a Roadblock when faced with bungee jumping 240 feet from a bridge into the Corinth Canal. In the second episode Teams battle the scorching heat while transporting shrimp baskets for one mile to a local fisherman.”

Five teams remain and head to Corinth Canal. Tara and Joey leave in first place, Matt and Redmond in second, Scott and Brooke in third, Logan and London in fourth and, Floyd and Becca in fifth. Once arriving at the Canal teams must decide who will complete the roadblock.

The roadblock involves bungee jumping off of the Bridge of Corinth. Joey is the first to jump and then he and Tara head to Vietnam. Matt is next to jump and he is excited but nervous. He loves the experience. He and Redmond are in second and head to the airport.

As Scott and Brooke drive toward the Canal Scott says it is his turn to complete the road block. His only fear is that it will be bungee jumping. He can do anything but that. They open the clue and Scott cannot believe it is bungee jumping. He begins to scream and cry that he can’t do it. He gets suited up but is still crying and shaking as he moves out toward the edge of the platform.

Brooke offers him support and he does it. As he makes the jump he screams but he is successful. His team heads to the airport for a plane bound to Vietnam. Logon and Becca jump for their teams and love the experience.

All teams are on the same flight to Hanoi, Vietnam. Once there they take taxis to a local park for their next clue. The clue leads them to a Buddhist temple. Once they arrive at the temple teams face a detour, Bamboo Climb or Window Design. In Bamboo Climb teams must find and pick up three long ladders made of Bamboo and use the ladders to gather up three bird cages.

Teams must then return all the items back where they started. In Window Design teams must pick up three mannequins and then take them to a store where they will create a window display to match a photo.

All the teams decide to complete the Bamboo Climb challenge. Becca and Floyd are in first place and easily find the first ladder. Matt and Redmond and Logan and London find the ladders next. Scott and Brooke can’t find a ladder and decide to switch detours.

Brooke struggles to carry the mannequins and starts to scream and yell. Scott tries to calm her. Becca and Floyd work together and easily complete their task. The next clue sends them to the pit stop.

Matt and Redmond are right behind Floyd and Becca on their way to the pit stop. Tara and Joey also can’t find any of the ladders and switch tasks. They easily find their mannequins and start creating their window display. Scott and Brooke continue to bicker and fight as they try to find the store where they need to complete their display.

Five teams remain but Joey and Tara will have to complete a speed bump to successfully finish this leg of the race. The teams that finish in the top four places will move on to the finals. Floyd and Becca leave first and board a bus to Ninh Binh.

Matt and Redmond leave in second, Logan and London are in third, Brooke and Scoot are in fourth with Joey and Tara in last place. Floyd and Becca and Matt and Redmond leave on the first bus. The last three teams all get onto the second bus even though Scott and Brooke tried to pay the bus driver to leave before Tara and Joey could board.

As teams arrive in Ninh Binh they must check out bicycles and ride to a local temple. Teams find their clue at the temple, must grab a gnome and get back onto their bikes. The next stop is a road block were they must load basket traps onto their bike and deliver them.

Floyd and Matt decide to complete the task for their teams. They work together and get their bikes loaded but struggle to ride with the large amount of items. As Floyd rides he doesn’t realize one of his items has fallen off. He continues on but then falls over.

Matt easily peddles his bike. Tara and Joey arrive and must complete their speed bump which involves collecting 6 dozen eggs from wild ducks and deliver them to a local farmer. Matt finishes the tasks and helps Floyd get his bike back on track. London will complete the road block for her team. Floyd tries to turn in the baskets he has and then hopes to go back to get the ones he dropped but is told he has to turn everything in together.

Tara and Joey turn in their eggs and head to the road block. Matt and Redmond are in first place and now must row a boat using their legs and feet instead of their hands and arms. They must gather items and deliver them in the boat using the new rowing technique. The task is very difficult and Matt struggles. Scott will complete the task for his team.

Floyd arrives back at the beginning and has to start over. Tara and Joey get lost and struggle to find the road block. Matt gets the hang of rowing and they deliver their items. Scott delivers his baskets quickly.

Matt and Redmond head out to the next pit stop. They must climb 500 steps to find Phil at the top of Hand Mua Peak. London can’t keep her bike straight and begs Floyd for help. He helps her get the bike back on track. Floyd and London have to walk their bikes rather than ride them but slowly make progress.

London’s bike is broken and she has to run pushing her bike. Joey easily passes her. Matt and Redmond check in to the pit stop first and win a trip to Costa Rica. Floyd finds the baskets he dropped and finally gets his clue. He and Becca were the first team to arrive at this road block and are the last to finish it.

They start off to the next task but Floyd is so fatigued he crashes his bike. Becca takes his backpack for him and offers him support. He tries but crashes again. Scott and Brooke deliver their items and row back to their bikes. Tara and Joey and London and Logan have a difficulty getting the hang of how to row their boats.

The medics come in to take care of Floyd. Tara and Joey argue as she tries to row. Brooke whines as she rides her bike and Scott asks if she is giving birth. They get their next clue and Brooke whines again as she realizes they have to climb so many stairs. Tara and Joey and London and Logan deliver their goods in their boat and move on to the pit stop. Scott and Brooke check in second.

Floyd is still light headed and his temperature is high. The medic continues to work on Floyd. Tara and Joey check in third with Logan and London right behind them in fourth.

Phil meets Becca and Floyd and tells them that all the other teams have checked in and they have been eliminated. Floyd and Becca are happy they had a chance to meet and will always be friends.