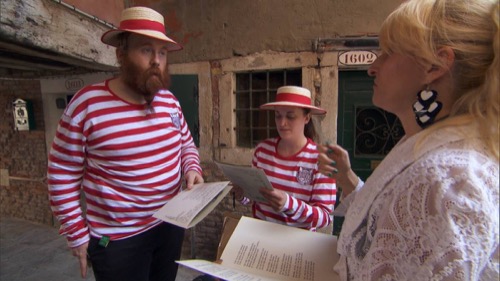 Tonight the CBS series The Amazing Race airs with an all-new Thursday, May 4, 2017, season 29 episode 6 and we have your The Amazing Race recap below. On tonight’s season 29  episode 5 called, “Have Fun and Get It Done” as per the CBS synopsis, “Teams race through Venice, Italy where one team reaches a breaking point in a frantic search for a water taxi.”

Liz and Michael both are struggling because they miss their family at home. Becca and Floyd are the first to leave for Italy. Matt and Redmond are right behind them. Then Joey and Tara, Liz and Michael, Scott and Brooke, and London and Logan in last place. First the teams take a bus to the port where each team board speed boats and race to the next clue. Teams arrive at Piazza San Marco and must find a man in green cleaning the streets. He gives them their clue that indicates a detour. The teams must choose between Sing it – they must learn an Italian song and performance it correctly or Bring It – they must stack a cart with luggage and maneuver it through the narrow and crowded streets and alleys to a hotel lobby.

Joey and Tara, London and Logan, and Matt and Redmond pick Bring It. Becca and Floyd and Michael and Liz will try Sing It. Scott and Brooke struggle to find the man with the clue. Michael and Liz and Scoot and Brooke are angry because Logan and London did not help them find the man with the clue and both teams feel like they have helped them a lot.

Matt and Redmond drop the suitcases repeatedly but don’t give up. All the teams that picked Lift It have a hard time getting the carts up and down the many steps in the city. Becca and Floyd fail their first attempt at singing and must try again. Joey is a machine in pulling the cart and they make good progress. Matt and Redmond arrive at the hotel before any of the other teams and are in first place. Becca and Floyd fail a second time.

Tara and Joey arrive at the hotel next and are in second place. Matt and Redmond arrive at the next clue which is a road block. One of them must pick a character preforming improv and make an exact replica of the mask the character is wearing. Attention to detail is key.

Redmond will complete this road block. Becca and Floyd are successful in the third attempt at sing and are in third place. Liz and Michael fail in their first attempt at singing as do Scott and Brooke. London and Logan arrive at the hotel and are in fourth place. Scott and Brooke are successful in their second attempt and head to the road block in fifth place. Liz and Michael finally finish their song and are in last place.

Scott and Brooke can’t find a taxi and she starts to whine and complain. Tara will complete the road block. Redmond finishes the road block as Tara just starts. He and Matt head to the next pit stop. Floyd will paint the mask for his team as will Liz. Michael continues to complain about Logan and London not helping him when he asked. London will paint for her team. Matt and Redmond are the first to check in and win a 7 day trip to Grenada.

Tara and Joey check into the pit stop in third place. Brooke finishes next and she and Scott head to the pit stop followed by Logan and London. They all check in together. Liz and Michael are the last team to check in. However, it is the first non-elimination leg and they are still in the race.