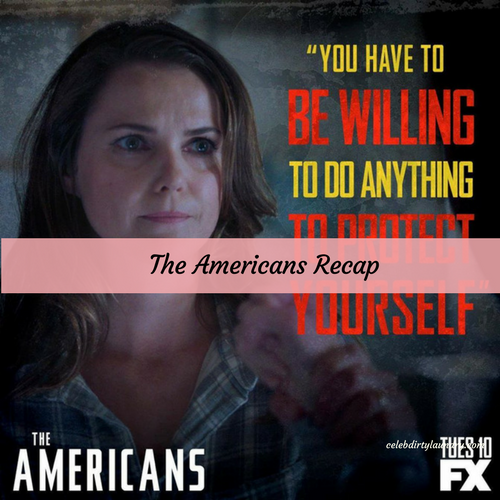 Tonight on FX The Americans airs with an all new Tuesday, March 14, 2017 episode and we have your The Americans recap below.  On tonight’s The American’s season 5 episode 2 called, “Pests,” as per the FX synopsis, “Stan and Oleg wrestle with the harsh consequences of their complicated history as Philip (Matthew Rhys) and Elizabeth (Keri Russell) face a new mission with devastating implications for their country.”

Tonight’s episode of The Americans kicks off with Philip and Elizabeth Jennings meeting up with their handler – they deliver the sample of William’s body that they stole from his grave. Philip explains that they had to kill Hans on the mission because he cut his hand and may have been contaminated with Lassa fever.

Their handler reveals that they have bigger problems, the center has been sending messages every hour – they have reason to believe that the US is contaminating shipments of grain headed to the Soviet Union, they are trying to cut off the Soviets’ food supply.

Philip and Elizabeth head home, they’re shocked when they realize that Paige isn’t in her bedroom and they start panicking. They think she might have snuck out to Matthew’s house. Before they start an official search, they hear something in the closet – Paige is sleeping in there. She mumbles that she couldn’t sleep and climbs into her bed. Elizabeth and Philip are obviously baffled by her behavior.

The next day, Philip heads over to Stan’s for a beer – they chat about the woman that Stan has a crush on at his gym. He still hasn’t gotten up the nerve to ask her out. Their chat turns to Paige and Matthew, and Stan reveals that he’s worried about Paige, he can tell that something is up with her and she hasn’t been herself lately.

Back at the Jennings House, Elizabeth takes Paige in to the garage for another self-defense lesson. Elizabeth tries to talk to her about Paige. She informs her daughter she could care less if she is having sex, and she can date whatever boy she wants, but not Matthew. Russian spys’ daughter and an FBI agents’ son is a disaster waiting to happen.

At work, Stan is called in to his boss’s office. They got word that Oleg is alive and well, and working at KGB Headquarters in Moscow. Stan’s boss seems to think that they can turn Oleg, and Stan scoffs that it’s not possible. The FBI seems determined to turn Oleg, and get him to work for them, even if they have to blackmail him or threaten his family in order to get him to do so.

Meanwhile, Philip and Elizabeth’s new mark Morozov is headed to a grain field in Illinois. Elizabeth puts on her disguise, and tails them all the way there. While she’s on the road, Philip is at their fake house across the street from Morozov’s, cleaning the gutters

Paige heads over to Stan’s house to do homework with Matthew. He can tell that something is bothering her, Paige admits that she’s in a fight with her mom. She’s sick of her mom always trying to have things her way, and not letting Paige live her own life.

Paige and Matthew proceed to make out on the couch, and he slips a hand under her shirt. It looks like Paige is taking what her mother said to heart, after all, Elizabeth insists that she doesn’t care if her teenage daughter has sex.

Stan decides to take his grievances to the higher-ups, he meets with the director and fills him in on his issue with Oleg Burov being targeted. The FBI thinks its strange that Stan is trying to hard to protect Oleg, after all he is a KGB officer. But, Stan points out that Oleg already helped them massively.

Elizabeth is still snooping around Illinois. After Mazarov and his people leave the farm, she decides to check it out. She finds a massive greenhouse filled with plants, and some of them appear to be dying. While Elizabeth is poking around the plant, she stirs up some insects, thousands of tiny black bugs begin buzzing around the green house and biting Elizabeth’s legs. She rushes out of the green house and drives home and hops in the shower.

In the morning, Philip heads to the gym with Stan. He can’t wait to introduce him to his new girlfriend Renee. Renee and Stan make plans to go on a second date with Philip, but something is a little off about her. When Philip heads home, he and Elizabeth discuss the bugs in the green house – she thinks they are going to have to question Marazov to figure out what he’s up to.

Meanwhile in Moscow, a man in a trench coat corners Oleg on his way home from work. He slips Oleg a map and whispers that Stan Beaman sent him and they need to talk soon.

Elizabeth and Philip put on their disguises and head out to dinner with Marazov and his family. While they eat dinner, Marazov rants about how much he hates where he came from, the Soviet Union. Things get awkward when Marazov begins arguing with his son Pasha in Russian, especially since Philip and Elizabeth know Russian.

Elizabeth and Philip realize that Paige is going to see Matthew no matter what they say, so they decide to take a different approach with her. They head up to her bedroom when they get home and sit her down and teach her a tactic that will sooth her if she is ever feeling overwhelmed or emotional while she is with Matthew. The idea is basically to distract herself so that she doesn’t spill the beans about her parents being spies.