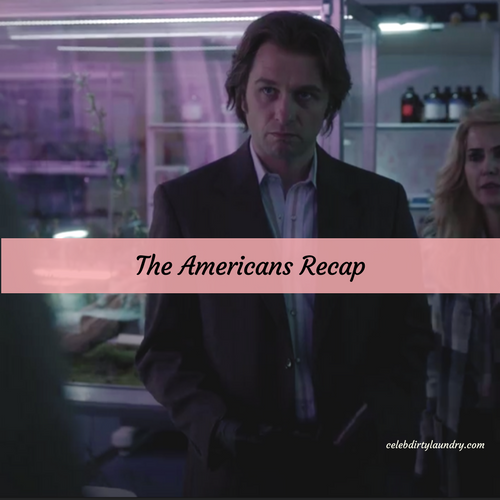 Tonight on FX The Americans airs with an all new Tuesday, March 21, 2017, episode and we have your The Americans recap below.  On tonight’s The American’s season 5 episode 3 called, “The Midges,” as per the FX synopsis, “Philip (Matthew Rhys) and Elizabeth (Keri Russell) tell Paige more about the family business, but pressing new questions arise when an operation takes a ghastly and unexpected turn.”

Tonight’s episode of The Americans kicks off at the bowling alley – Elizabeth and Philip are under cover with their fake son Tuan, and the Russia Family they have been keeping an eye on. Alexei is a Russian defector, and they think he may be helping the Americans poison the Soviet Union’s grain supply. Obviously, Alexei has no idea that Elizabeth and Philip are actually Russian, so he rants on and on to them about how horrible his homeland is.

In the car on the way home, Elizabeth and Philip discuss what they learned about Alexei and his family during their trip to the bowling alley. Tuan seems like a loose cannon, he rants that Alexei is a terrorist and he can’t wait for him to get a dose of his own medicine.

While Elizabeth and Philip are getting changed out of their disguises, Philip quizzes her about Matthew and Paige. Philip is concerned, there’s no way Paige will be able to keep her boyfriend in the dark about who they are. Philip thinks they should let Paige in on their latest mission, it will distract her from her high-school boyfriend and help her see the bigger picture.

Philip and Elizabeth head home and sit down with Paige, they explain to her that the US government is testing bugs that can destroy entire wheat crops – they are going to starve the Soviet Union to death. Paige is concerned, she wants to know if her parents will be able to stop them. They explain to her that they are working on Alexei, but they’re pretty vague about their plans. Paige puts two and two together and realize that every time her parents go outside, they take on new identities and wear disguises.

In the Soviet Union, Oleg heads to a local grocery store and asks to speak to the manager in charge. Oleg explains that he is there on behalf of the Russian Food Administration, and he needs to check on a few things. He questions her about where she gets the food that she sells. As Oleg walks through the store to leave, he passes a woman with a scarf on her head, it’s none other than Philip’s ex Martha. After she got caught sharing secrets with the Russians, they arranged for her safe passage to the Soviet Union.

Philip stops by his fake house to check in on Tuan. Tuan explains that Alexei’s son Pasha is a baby, all he does is cry about how much he hates his dad and that he’s not popular at school. Tuan is a tough kid, his dad died when he was young, and he thinks that Pasha is ungrateful.

Elizabeth and Philip meet up with their handler, he reveals that he got the test results back on the bugs that Elizabeth found in the green house in Oklahoma. It turns out that the bugs are called Midges, they were imported from Australia, and they are known to decimate grain crops. It looks like the US may be plotting to ship the bugs to Russia to kill off their food supply.

Meanwhile, Paige is out at the diner with Matthew. He quizzes her about her family and why she has been acting so strange lately. Paige lies and tells him she is stressed out over a paper she has due.

When Paige gets home, she fills Elizabeth in on her chat with Matthew. Paige is visibly upset, she hates lying to him. And, she hates the fact that she will never be able to tell any of her boyfriends the truth and will have to be fake towards them. Elizabeth argues that it’s not lying, it’s protecting Matthew from carrying the burden of knowing the truth.

The next day Elizabeth and Philip head back to Oklahoma City. They check in to a motel to wait for their contact to arrive. Philip confesses to Elizabeth that some of the hateful things Alexei has been saying about the Soviet Union he happens to agree with. They share a moment, and slow dance to a western song on the radio.

Meanwhile, Stan and his partner have been running down leads on Amtorg all day. But, none of the people that they have tried to question will give them the time of day.

In the Soviet Union, Oleg is on his way home from work when someone corners him on the street, apparently he skipped the meeting that the FBI had set up with him. He made it very clear that he wasn’t interested in giving them any more info. The man slips a cassette tape in to Oleg’s pocket. When Oleg gets home, he plays the cassette tape and realizes that it’s a recording of him giving Russian intel to Stan. If he doesn’t cooperate, that tape could get him arrested and possibly even killed in Russia.

After dark, Elizabeth and Philip break in to the green house to see what information they can gather. While they are inside, they get a warning from their partner in the parking lot that someone is coming in to the green house. Elizabeth and Philip rush and hide, a scientist comes in and gets ready to work. He can tell that someone has been inside the lab, and he tries to call for help. Philip jumps out and grabs the phone from him.

Philip quizzes the scientist about what they are working on there, and who he is working for – the scientist insists that its confidential. After he gets roughed up a bit, he sings like a canary. He explains that he has created a grain-eating bug for a company called Agrycor, and he already shipped out over 30,000 eggs, that will hatch in to the bugs. He gives Elizabeth the address where he has been shipping the bug eggs, and then Philip snaps his neck and kills him.

Philip and Elizabeth work together to clean up any traces that they were at the lab, and then drag the scientist’s body out of the building to the car.