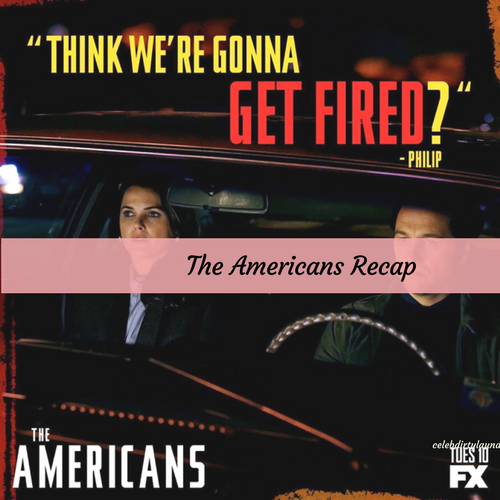 Tonight on FX The Americans airs with an all new Tuesday, April 4, 2017 episode and we have your The Americans recap below.  On tonight’s The Americans season 5 episode 5 called, “Lotus 1-2-3” as per the FX synopsis, “Philip (Matthew Rhys) and Elizabeth (Keri Russell) receive surprising news about Henry and shattering news about a past operation. Elsewhere: Stan might be falling in love, but Philip wonders if something darker is going on.”

Tonight’s episode of The Americans kicks off with Philip undercover having dinner with his mark Deidre Kemp. She offers to teach him how to use a new computer program called Lotus.

Meanwhile, Elizabeth is hanging out with Alexei’s wife. She reveals to Elizabeth that she has been going stir crazy and is getting a job at the Department of Agriculture with Alexei.

After their dinner date, Philip heads to Deidre’s house for a night cap. While they are having sex, Philip has flashbacks to his dismal childhood in Russia. After they are finished, Deidre is more than happy to show Philip printouts for Lotus.

The next day, Elizabeth and Philip head to Henry’s school to meet with his teacher. They learn that Henry is actually doing very well in school, better than the other students, and his teacher wants to move him up a grade in to Algebra 2.

When they leave the school, Elizabeth and Philip are baffled – they thought Henry just played video games all day, they have no idea why he is suddenly a star scholar. On the way home, Elizabeth fills him in on her meeting with alexei’s wife – if she gets the job, it will make their jobs a lot easier.

Stan and his girlfriend are heading to the movies, they stop by and invite Elizabeth and Philip to tag along, but they turn them down.

When they arrive home, they can’t wait to tell Henry the good news about his teacher moving him up a grade. Henry is upset that his parents are so surprised, he storms off to go play his computer games.

Later that night, Philip notices that Stan’s girlfriend’s car is still in the driveway and she is spending the night again. He confesses to Elizabeth that he thinks something is up with Stan’s girlfriend and she might be a Russian Spy too. Elizabeth thinks his theory is crazy, but Philip points out that they have been sending the centre detailed reports about Stan, they knew that he was single and lonely, and could have planted his girlfriend at the gym.

Masha, Philip’s adult son from a previous relationship, has arrived in the states. He calls a switch board operator and speaks in code, he says that he needs to see “Doctor Walters,” and his name is Stacey McAllister. The woman is taken aback, she tells Masha to call back tomorrow at 4:00 PM.

Elizabeth is undercover, and her new mark is cooking her lunch, he’s a scientist at Agrycor. He wows Elizabeth with his culinary skills, and brags about his bottle of Egyptian wine. She gasses him up and raves about how interesting he is and how he knows so much about so many different things. It’s not long before they take it to the bedroom.

Back home, Philip is making a big show of playing football in front of the house with their fake son Tuan.

Philip heads to his real home to have dinner with Paige, she awkwardly jokes about how Henry is the brains of the family and not her, even though she studies relentlessly. Their conversation changes to Matthew, Paige confesses that she’s having second thoughts about dating him. Paige thinks that because of her parents, she’s screwed up, and she’s meant to just be alone.

Gabriel and Claudia meet in secret, Gabriel fills her in on Masha, and reveals that a call was intercepted for Philip and Masha is trying to get in contact with his father. Claudia wants to make sure that Masha doesn’t find Philip – she thinks it is a horrible idea to reunite father and son. She says Masha can’t be trusted, he’s unstable, and defected from the army.

In the Soviet Union, Oleg returns from home, and his parents have a surprise for him. They invited three women over for dinner, and they’re all falling over each other trying to impress Oleg. It looks like Oleg is a pretty hot and eligible bachelor in the soviet union.

Masha calls the operator back – she tells him to head to Bess Truman Park at 11:00 AM tomorrow.

Matthew is growing suspicious of Paige, he finally confronts her about why she has been avoiding him. Paige insists that she likes him a lot, but he’s her first boyfriend and she’s not sure how to act sometimes.

Elizabeth is still canoodling with the Agrycor scientist, while they sit in front of the fireplace, she gets him to talk about his work. Apparently, he’s working on the strongest strain of wheat knows to man, that can withstand any pests of climate, and he’s determined to help countries that are starving and experiencing food shortages. It sounds like he might actually be one of the good guys.

Masha heads to the park – but Philip doesn’t show up, instead Gabriel does. Gabriel and Claudia decided to never tell Philip his son was even looking for him. Gabriel tells Masha that if he cares about his dad, he will go home, and forget about trying to find him. Gabriel even offers to help him get home safely.

Elizabeth returns home from Kansas, she tells Philip that they were wrong about her mark Stobert. He’s one of the good guys, and he’s trying to save the world, the bugs they found were there to test the crops for resistence, not test ways to kill off the Russians. Philip is shaken up – that means they killed the scientist in the lab for nothing, he was completely innocent.

Tonight’s episode ends with Oleg following the map the CIA agents handed him – he heads to the meeting place, but no one ever shows up.