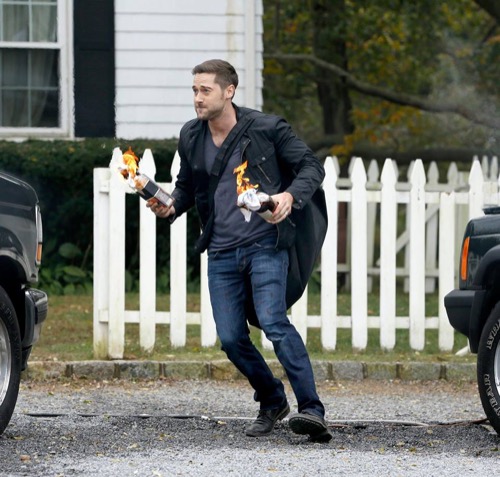 Tonight on NBC their hit drama The Blacklist starring James Spader airs with an all-new Thursday,  November 15, 2017, episode and we have your The Blacklist recap below. On tonight’s Blacklist Season 5 episode 8 called, “Ian Garvey,” as per the ABC synopsis, “In the fall finale, Tom goes missing; and Liz desperately retraces his steps in order to find him. Meanwhile Red’s hunt for the suitcase of bones puts him on a collision course with Tom that will change everyone’s lives forever.”

Tonight’s episode of The Blacklist kicks off with a concerned Elizabeth Keen arriving at the FBI office, she tells Harold that her husband Tom is missing.
Meanwhile, Tom is still being held hostage by a mystery man that is very interested in Reddington and the suitcase of bones. Pete McGee and his girlfriend have been murdered, but Tom is still alive because he agreed to deliver Reddington.

Red has a man snooping around where Tom is being held, hostage. He knows that Tom is in trouble. Tom is forced to call Reddington, he tells Red to meet him at a hotel, it’s a set-up.

Liz has been calling Tom’s phone all morning and still no answer. She has the entire FBI looking for him too. Elizabeth calls Red, but he lies and tells her that he has no idea where Tom is.

Ressler finally gets a tip, they have located Tom’s car, they rush to the motel but the woman at the front desk isn’t very helpful. Liz and Ressler search the motel rooms but they come up empty-handed. Liz panics when she finds a blood mirror and Tom’s cell phone on the floor.

It looks like Tom can take care of himself though. He manages to get free and steal one of his captor’s guns, a shootout ensues as he runs through the woods. He reaches a clearing and Dembe and Red arrive in the nick of time. Tom hops into their car with the suitcase and they make a quick getaway.

Tom, Red, and Dembe don’t make it too far. A stray bullet hit their radiator and their car is dead. The three of them ditch the car and begin hiking through the woods. Tom is in bad shape and in desperate need of some first aid. He and Red bicker back and forth over the suitcase. Red rants that Tom can never leave well enough alone. They stumble across an empty farmhouse and slip inside to patch Tom up.

Meanwhile, Liz and the FBI team are still searching the motel room. They get a break and learn that Tom was seen at a nearby gas station before he checked in to the hotel. Ressler and Samar rush there to investigate.

Liz and Ressler pull security footage from the gas station and ID Lena and Pete. Elizabeth is certain that if they find Lena and Pete, they will find Tom, little does she know they are both already dead.

Red and Tom are in trouble, the men that are chasing them arrive at the farmhouse, with guns blazing. The dynamic duo put their differences aside and work together to get out alive. Dembe manages to hotwire a car and they make another hasty getaway, setting the farmhouse on fire as they leave.

Once they are out of harm’s way, Tom and Reddington have a heart to heart. Red confesses that when he found out Tom married Elizabeth, he planned to kill him, but then he saw how happy he made her and decided to spare his life. Red is grateful that Tom makes her happy…but he still isn’t going to tell him who the bones belong to in the suitcase.

They pull over with the getaway car at a store and Tom heads into the restroom to clean up. While he is gone, Dembe warns Red that there will never be peace until he stops lying to Elizabeth and Tom. Suddenly, Red realizes that Tom just played him. He runs into the bathroom, but Tom is already gone.

Meanwhile, Elizabeth and Ressler have just located the bodies of McGee and Lena. Elizabeth breaks down in tears when she realizes that Tom isn’t there.

Tom arrives at a bus station, he sits down and takes an envelope labeled “DNA Results” out of his bag that he stole from the suitcase. He reads the results and is reeling. He calls Elizabeth from a payphone, he orders her not to tell anyone that he is alive, and tells her to leave ASAP to meet up with him…he has news for her.

Red has Aram track Elizabeth’s phone calls, he learns that Tom was at Union Station and races there. Tom cleans up in the bathroom and is paged o the pay phone. Red warns Tom over the phone to “walk away before he makes a huge mistake.” Tom won’t back down, he says he knows the truth now and soon Liz will too.

Elizabeth rushes home to meet up with Tom. When she arrives, he has been taken hostage again…by the same man that has been tracking Reddington. The men knock Elizabeth out and proceed to stab Tom multiple times. It doesn’t look good for them. Their boss grabs the suitcase and leaves, he orders his men to finish off Elizabeth and Tom.

The men prepare to kill Elizabeth first. Somehow Tom manages to muster up enough strength to grab the knife and try to fight them off. Dembe and Red barge in, guns blazing, and rescue Tom and Elizabeth. Red orders Dembe to call the hospital. Dembe warns Red that it doesn’t look good and Liz and Tom might not make it.

Dembe and Red throw them in the car and begin racing to the hospital, with a police and FBI escort. Tom and Elizabeth are barely hanging on, Tom begs Liz not to close her eyes and to hang on. They finally arrive at the emergency room and are rushed into the hospital on stretchers. Ressler and Samar watch I horror as Tom begins flatlining.

Tonight’s episode ends with Red sitting in Elizabeth’s hospital room reading to her from the bible. She’s hooked up to various tubes and her eyes begin to flutter open. Red jumps up in shock when he realizes that she is awake. Elizabeth can’t speak, she writes on a note pad and asks Red how long she has been sleeping. Red explains to her that she has been n a coma for 10 months…and Tom Keen is dead.