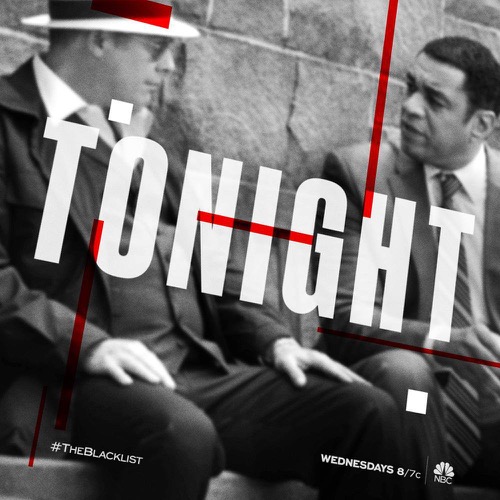 Tonight on NBC their hit drama The Blacklist starring James Spader airs with an all-new Thursday,  November 1, 2017, episode and we have your The Blacklist recap below. On tonight’s Blacklist Season 5 episode 6 called, “”The Travel Agency,” as per the ABC synopsis, “While Cooper enlists Red on a case of personal importance, Ressler leads the Task Force on a mission to stop the resurgence of once-dormant murder-for-hire ring. Determined to find answers, Tom disregards a warning to halt his investigation into the suitcase.”

Tonight’s episode of The Blacklist kicks off during what appears to be several years ago, a man is getting ready for work and watching a news segment about the Berlin Wall coming down. He tells his wife that he has to get to work and leaves. He heads to the bank and opens a safe deposit box with the number 342 on it.

The man takes the contents and heads to someone’s house. He pulls out a gun and shoots and kills an unarmed man in his front house. He picks up an axe and finishes off the job. Present time – Elizabeth heads to a

Present time – Elizabeth heads to a mini-golf course to meet with Reddington. He brags to her that he and Dembe will be in a golf tournament and he has every intention of winning. Red gives Elizabeth a tip, he says that Mitchell Dunning is going to be assassinated by “The Travel Agency,” a murder for hire ring.

According to Red, the Travel Agency closed their doors 12 years ago and has popped up again, they’re responsible for dozens of high-profile murders. Elizabeth heads back to the FBI office and briefs Ressler and the team. Harold orders them to bring Dunning into protective custody.
Harold calls Ressler into his office and tells him that a “personal issue” has come up. He tells Ressler to stay at the office and keep an eye on things for him. Ressler heads to a shady apartment building and bangs on the door, he’s looking for someone named Isaiah.

Elizabeth and Navabi head over to Dunning’s house, he and his wife are frantically trying to pack their car and leave town. While they are talking to Dunning in front of his house, someone in a black town car shoots him in the chest and drives off.

After all of the excitement, Elizabeth questions Dunning’s wife while he is carried off in a body bag. Navabi finds a newspaper clipping in Dunning’s car, it’s about the man that was murdered with the axe in York County.

Tom Keen is cornered by Red, Red knows that Kaplan gave Tom a suitcase with a skeleton in it. Red warns Tom that the suitcase already got Nik killed, and his quest is only going to cause more death. Tom isn’t backing down, he says that it’s Red’s secrets that bring death. Red says that he is going to recover the suitcase and rebury the body where Tom will never find it. Tom warns him that whatever secret he is hiding will come out eventually…they always do.

A man in a trench coat arrives at Pete McGee’s apartment and breaks in. He threatens her to stop looking for Pete McGee and forget that he existed.

Navabi and Keen head to the home of the man that was murdered with the axe years ago. They speak to his daughter and learn that he used to run a travel agency years ago, but he closed it. She has no idea why Dunning would have an article about her dad in his car. She agrees to let Elizabeth and Navabi look at his files. They realize that he was actually in charge of “The Travel Agency.” And the owners of the Travel Agency aren’t killing people, they are being killed.

Reddington meets up with Harold Ressler, he gives him the address of the man he is looking for. Red offers to come along for back-up, but Harold turns him down.

Harold heads to the next shady building, it looks like some sort of drug den. He pulls his gun on a drug dealer named Castro and a shootout ensues. Luckily Red and Dembe decide to show up anyways and give Harold a hand.

Meanwhile, the creepy killer wakes up again, and he watches the exact same show about the Berlin Wall…again. The killer leaves work and heads straight to the same safety deposit box, number 342…again.

Back at the FBI, Elizabeth and her team are pouring over the Travel Agency’s records that they seized. It turns out the Travel Agency wasn’t just booking cruises, but also running guns and carrying out murders for hire. There’s only one member of The Travel Agency that hasn’t been killed, a man named Argon, they decide to bring him in.

Red and Harold threaten Castro with a lethal dose of heroin if he doesn’t tell Harold where Isaiah is then he is shooting him up with the needle. Castro finally admits that he sold Isaiah a gun and gives up an address where he has seen him last.

Ressler and Navabi visit Argon at work, while they are talking to him, the killer in the town car tries to shoot and kill Argon and then he drives off. Luckily, Argon isn’t killed, only injured. They take him to the FBI office and admits that he used to work at the agency, and the man that was shooting at him used to be an asset 30 years ago. Argon explains that they never used names, only numbers, and the shooter was number 342.

Elizabeth heads to the post office. She learns that the man that owns 342 is named Calvin Dawson, and he lives in a convalescent home, he was injured in a robbery years ago and suffers from a rare sort of amnesia. Apparently, Calvin thinks that he’s still living in 1989. Dawson isn’t at the home, the FBI raids his house, where his wife basically kept a time capsule so that he thought it was 1989.

Dawson is in the car with Eleanor, his wife, she knows that the FBI is on to them and is making a run for it. In the car, Eleanor reveals to her husband that he was in an accident 30 years ago and when he was in the hospital, she found his secret office and list of men he had murdered for The Travel Agency. After pouring over all of his files, she set him up and took advantage of his amnesia. Eleanor was disgusted, so every day she sent Dawson on a contract to kill actual members of the Travel Agency and give them a dose of their own medicine.

Reddington and Harold find Isaiah and he’s in bad shape. Isaiah has a drug problem, and he’s hiding because he witnessed a murder and the killer, a man named Zeke, is looking for him. Harold promises to help Isaiah. Back in the car, Harold admits to Ressler that he feels responsible for Isaiah and looks out for him because his own dad was killed by a cop years ago. Harold marches into a club and finds Zeke Wilson and arrests him.

Back at the FBI, they are tracing Calvin Dawson’s wife Eleanor’s phone and trying to locate them. Eleanor has taken Calvin to a cemetery, she announces they are there to visit their children. Calvin is shocked when he learns that his daughters are dead. Eleanor reveals that they were in Miami and she was in the hospital, while Eleanor was in surgery, Calvin took the girls with him on a job. Calvin was jumped and nearly killed, that’s how he has amnesia now. Meanwhile, his daughters were left sitting in the car for hours and died from the heat.

Calvin is shocked by everything Eleanor has revealed. She’s proud of everything that she has done, tricking him into killing his fellow killers to get payback for their daughters.

Elizabeth shows up at the cemetery with the FBI team. But, Eleanor isn’t going down without taking Calvin with her. She shoots and kills Calvin, and then she is shot and killed herself.

Back at the FBI, Harold is in his office with Isaiah, he tells him that he is safe now, and Zeke is behind bars – but Isaiah will have to testify. Isaiah agrees and is thankful for the help.

Tom Keen works with Pete McGee’s girlfriend to break into Pete’s computer and try to figure out where he has disappeared to. Their search turns up nothing, but Tom realizes that Pete stole his girlfriend’s identity and is using her name to open up credit cards while he’s on the run.

Tonight’s episode of The Blacklist ends with Elizabeth taking Tom Keen to the courthouse, she asks him to legally marry her under the fluorescent lights.