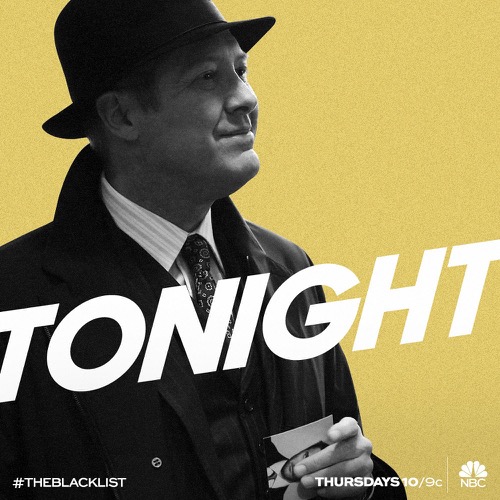 Tonight on NBC their hit drama The Blacklist starring James Spader airs with an all-new Thursday,  February 2, 2017, episode and we have your The Blacklist recap below. On tonight’s Blacklist Season 4 episode 12 called, “Natalie Luca,” as per the NBC synopsis, “The team targets a sly assassin who kills her prey with a fatal disease. Also, Red (James Spader) tasks Tom to go undercover inside his criminal organization.”

Tonight’s episode of The Blacklist kicks off with a flashback to 14 years ago in Moldova. A little girl wakes up in a hospital – and is shocked to see that the building is full of dead patients and staff. Everywhere she turns, is a body with red blotches on it, and they all appear to have white foam coming out of their mouth. The little girl quickly realizes she is the only person alive left in the hospital, and then men in hazmat suits arrive.

Present Time – a man named Zach is getting a massage. He’s surprised when a hot new blond girl arrives, it’s not his normal masseuse. The mystery masseuse rubs him down and then orders him to roll over and gives him a kiss, then she slips out of the room. Within seconds the man is covered in red blotches and begins foaming at the mouth.

Red is meeting with his accountant Abe, he learns that the bid on the Whistler Cruise Line was lost because the man that was supposed to transfer the money dropped dead. No one knows where the money is, Red has lost over $200 Million. Red meets with Liz and tells her that his operation is under attack, and he wants Liz’s help finding out who killed Zack Smoll.

Keen and Ressler do some research and learn that Zack died at the massage parlor, and the CDC has flagged his body. Keen and Ressler visit the CDC lab and learn that Zack contracted a rare and mutated version of Meningitis called Luschen’s Disease. It’s deadly, and you can contract it and die from a light touch. The doctor explains that Zack caught the disease from lipstick – someone kissed him. The strange part is, whoever kissed him and is carrying the disease, should have been dead years ago, when you contract Luschen’s Disease, you are supposed to die instantly.

Samar is being rude to Aram, he confronts her and wants to know whats up. Samar confesses that she got his paycheck by mistake, and she realized that Aram makes 32% more than her – she is not a happy camper. Samar thinks she is being seriously underpaid, she has a PHD and gets shot at, unlike Aram who sits on the computer all day.

Aram does some research and learns that there was only one other confirmed death from Luschen’s Disease in Maryland at a pawn shop. He pulls security footage from the pawn shop and massage parlor and they see the same blond woman on both tapes.

Red makes a phone call to a mystery man named Magnusson and demands to know if he killed his accountant Zack. The man scoffs that it doesn’t matter if he did or didn’t, everyone that matters thinks he is responsible and Red looks weak for not retaliating. Then, he hands up on Red.

Tom Keen returns home with the baby and is shocked to find Red and Dembe sitting in his livingroom. Red wants to chat with Tom. Red explains that he made up the name of the infamous assassin, Legate, to cover up some of his own crimes. Tom is shocked, even he thought Legate was a real person. Red wants Tom to go undercover and pretend to be Legate so that Magnusson will contact him. Red is certain Magnusson will try to hire Legate/Tom to kill him.

Aram is hard at work at the FBI office, he does some research and learns that Natalie Luca is the only person in the world that has contracted Luschen’s Disease and lived from it. Keen and Ressler start trying to track down Natalie, they learn that she is living with her boyfriend Rumain, who happens to be a bio technician.

Apparently, Rumain and Natalie met at the hospital she lived in her own life. When Natalie was a legal adult, the hospital couldn’t force her to stay, she had fallen in love with Rumain and wanted to live with him. Ironically, they have a sheet of plastic in the apartment and although they are in love, they have never actually touched each other. Rumain has been working tirelessly to find a cure for Natalie, but it costs money. So, Natalie has been basically a Luschen’s Disease assassin and killing for hire to raise money to help cure herself.

The FBI learns that Natalie has attacked someone else – she killed two armored truck drivers and she and her boyfriend made away with the bags of cash. They find Natalie and Rumain’s apartment, and raid it – but they are already gone.

Meanwhile, Tom is running around and scheming with Red and Dembe. They fake the death of a man named Myron at one of Magnusson’s hotels so that Tom can take credit for it and get on Magnusson’s radar as the infamous assassin Legate. It’s not long before Magnusson sends one of his men to pick up Tom so he can chat with him.

Liz isn’t too thrilled that Red interfered with her family and convinced Tom to go back to work. Red reasons that Tom isn’t cut out for a mundane family life and he would have been back to work sooner or later, at least if he is working for Red – Liz knows that he is safe and where he is.

Red’s plan pays off, he uses Tom to lead him to Magnusson and get a one on one with him. Red is shocked when he learns that Magnusson actually isn’t the one that hired Natalie Luca to kill Red’s accountant. Magnusson says that he saw Red’s cruise deal falling apart, and he seized the opportunity, but he truly had nothing to do with Zack’s death.

Natalie and Rumain are pulling off one last job so that they have enough money to find a new place to live and get new research equipment since the FBI raided their old house. Ressler and Aram follow them to a high-stakes poker game in a mansion, and they corner Natalie and take her down with a taser. They can’t find her boyfriend Rumain. Natalie is loaded in to a hazmat van and whisked away.

A few minutes after Natalie is gone, Ressler and Aram realize that they loaded her in to the wrong vehicle, and she was kidnapped by a private biotech company that had been researching her. Rumain isn’t far behind Natalie. He runs in the fake hazmat ambulance off the road with his van, and moments later the FBI arrives. A shootout occurs, and Natalie is devastated when her boyfriend Rumain is fatally shot. As he takes his last breath, they finally share their first and last kiss. Samar gives Natalie a moment with Rumain before they take Natalie in to custody.

Natalie explains to Samar and Ressler that the private hospital, Hawthorne, was trying to kidnap her because they are making a biological weapon out of her cells. Ressler heads out to arrest Hawthorne. Samar heads back to the FBI and thanks Aram for helping her get a raise.

Tonight’s episode ends with Harold sneaking Red in to the room where Natalie Luca is being held so he can find out who hired her to kill his accountant Zack. Natalie reveals that it was a woman named Isabella Stone, and Red is shocked.