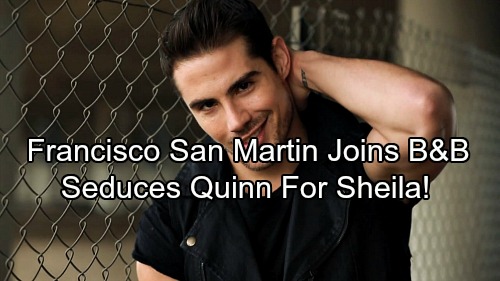 The Bold and the Beautiful (B&B) spoilers reveal the powers that be have hired Francisco San Martin to portray the new role of Mateo, as exclusively reported by EW. Fans of the CBS soap opera know that when a new man arrives in town, it usually isn’t long before he is knee deep in trouble with one woman or another – Mateo’s arrival will be no different!

The Bold and the Beautiful spoilers reveal that B&B’s Eric Forrester (John McCook) will hire Mateo as his estate manager, but soon his work will not just include looking after Eric’s mansion. Everyone knows that Sheila Carter (Kimberlin Brown) needs to destroy Quinn Fuller Forrester (Rena Sofer) and Eric Forrester’s marriage. Only then can she capture Eric for herself and become his wife.

After a failed attempt of keeping Quinn and Ridge Forrester (Thorsten Kaye) in a “broken” elevator, with no reaction from either; Sheila needs to step up her game if she wants to once again be Mrs. Eric Forrester.

The Bold and the Beautiful spoilers tease that Sheila will discover the gorgeous estate manager, and will come up with the new idea to use him to seduce Quinn, in hopes of having her finally removed from the mansion and Eric’s heart for good – but viewers have to wonder if it will be that easy since Quinn has proven beyond reasonable doubt that she is dedicated to Eric and ONLY Eric!

Fans of daytime drama, may recognize Francisco San Martin as he was the one who originated the character of Dario Hernandez and was on NBC’s Days of Our Lives from 2010 to 2011. He may also look familiar from the time he portrayed Fabian on The CW’s Jane the Virgin.