BY Kinsley Goldman on December 26, 2017 | Comments: one comment
Related : Soap Opera, Spoiler, Television, The Bold and the Beautiful 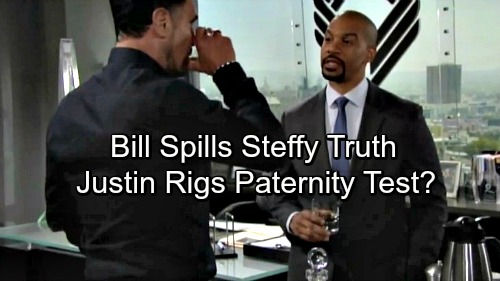 The Bold and the Beautiful (B&B) spoilers tease that Justin (Aaron D. Spears) will grow suspicious about the source of Bill’s (Don Diamont) problems. He’ll sense that maybe Brooke (Katherine Kelly Lang) isn’t the reason Bill’s been distracted lately. Justin will pump Bill for info later this week, December 26-29. He’ll assure Bill that he can be trusted with any secrets – even the most scandalous ones.

As Justin revs up the pressure, Bill will admit that he has Steffy (Jacqueline MacInnes Wood) on his mind. He’ll tell Justin what happened that night at the Forrester guesthouse. Bill will confess that he’s developed strong feelings for Steffy and now an added complication has emerged. He’ll reveal that Steffy is pregnant and waiting on a paternity test. 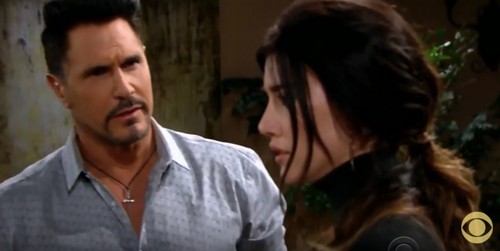 The Bold and the Beautiful spoilers say Bill will get pretty emotional during this conversation. Despite his love for Steffy, Bill must have major concerns about hurting Liam. Of course, he knows how much is at stake for Steffy as well. Part of Bill wants this to be Liam’s kid for the happy couple’s sake. Another part of him probably thinks he’ll have a shot with Steffy if he turns out to be the father.

B&B fans can expect Justin to be taken aback by Bill’s big news. Nevertheless, he won’t judge Bill’s actions or desires. Justin is a loyal right-hand man and he always stands by Bill through his messes. He tends to get involved in all the drama, too. Will that be the case this time? Perhaps Justin will be given a special task soon enough. 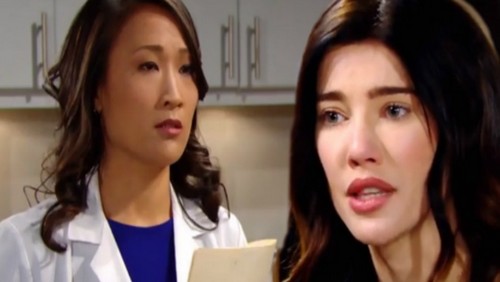 The Bold and the Beautiful spoilers state that the paternity test results will confirm Liam is the father. However, that doesn’t mean those results will stick. Could Justin convince the doctor to call Steffy back and insist that there was a mistake? He could bribe her, threaten her or both. Justin always does whatever it takes to accomplish Bill’s goals.

There’s even a chance that Justin will pursue this mission on his own. He might see how upset Bill is and decide to make a startling move. Regardless, Steffy could be in for a major shock in the near future. We’ll give you updates as other B&B details come in. Stay tuned to the CBS soap and don’t forget to check CDL often for the latest Bold and the Beautiful spoilers, updates and news.