The Bold and the Beautiful Spoilers: Bill Has A Conscience – Don Diamont Offers Emmy-Worthy Performance

The Bold and the Beautiful spoilers documented Bill’s (Don Diamont) overpowering force leading into the current triangle that’s been drawn between him, his son and daughter-in-law. This scribe, surely along with many B&B fans as well, feel that Diamont’s efforts are Daytime Emmy Award-worthy.

The classic soap angle, having two characters vying for a third’s love, was nicely established as the summer burned into the fall. Liam (Scott Clifton) was at odds with Bill regarding an initially unrelated matter. Their conflict centered upon the family business, not a romantic battle. 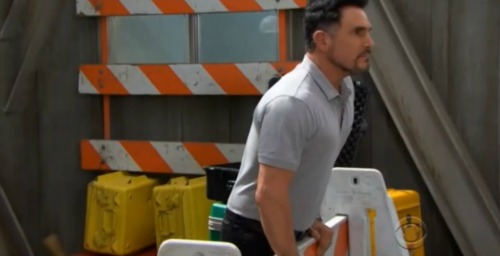 Steffy (Jacqueline MacInnes Wood), who was involved with Bill in the past, served as the middle-man, or in this case middle-woman. That term was apt and evolved in meaning as she tried to talk sense into her husband, while at the same time offering consolation to Bill. Her failure with Liam led to a shocking, after-the-fact consequence.

The dramatic collapse of the Spectra Fashions’ building involved more than the actual fall of the structure, as Liam and Sally (Courtney Hope) were trapped underneath the rubble. Bill greenlighted the destruction and had been told by Justin (Aaron Spears) that all was clear. But Liam impulsively decided to return to his sit-in position, Sally followed and tense scenes followed.

The greatness of the Dollar Bill character is fully meshed to Diamont’s portrayal of the flawed anti-hero. One episodic day after the head of the Spencer clan planned to leave Los Angeles with Steffy, he was stunned to learn that she was still committed to Liam. Bill agreed to keep quite about their mutual betrayal, which led to Diamont evidencing one of the greater turns in recent B&B history.

Bill was shown in his office, as Sky’s rendered shadow wavered. Instead of being angry, he was conflicted as Diamont’s range evidenced Bill’s conscience in stunning fashion. On that point this story sharply turned, again. And in this one particular episode Diamont affirmed his rank with the best actors in this genre.

Yes, it’s reasonable to project Diamont as more than a 2018 nominee. He could easily capture the Daytime Emmy Award for this particular season’s performance.

The beauty of daytime drama is that real life is referenced and then expanded. Tapping between believable and the surreal, B&B has found its voice within this arc.

This scribe and its fans can’t know what’s coming next, as various speculation was proven to be naive. But all can be certain that Diamont and his terrific colleagues will continue to deliver great soap.