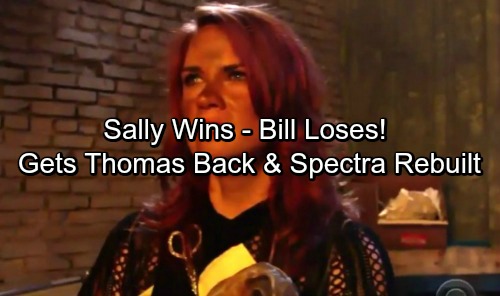 The Bold and the Beautiful (B&B) spoilers tease that Thomas’ (Pierson Fode) eyes will finally be opened. He’ll realize just how far Bill (Don Diamont) was willing to go for his treasured skyscraper. After Thomas visits Sally (Courtney Hope) in the hospital, he may be torn between the two women who need him. Thomas won’t want to bail on Caroline (Linsey Godfrey), but Sally could obviously use his help.

Thankfully, the news of the fire will be too much for lying Caroline (Linsey Godfrey) to handle. The same goes for Liam (Scott Clifton). The Bold and the Beautiful spoilers state that some confessions will be made and Thomas will be furious. He’ll shut the door on his relationship with Caroline and focus on seeking justice for Sally.

B&B fans can expect some tough moments for Bill. Once Brooke (Katherine Kelly Lang) is in the loop on his behavior, she’ll be appalled. Bill will have to work hard if he wants to earn Brooke’s forgiveness. Brooke tolerates a great deal from her shady hubby, but this scheme could be difficult to get past.

The fallout will affect plenty of people on canvas. The Bold and the Beautiful spoilers reveal that the Spectras, Forresters and other Spencers will all stand against Bill. Sally has always felt like an underdog, but Bill’s actions could inadvertently give her the upper hand. “Dollar Bill” will find out what it’s like to be targeted.

Since Thomas allowed himself to be duped, he may put in some extra effort to make things right. Thomas could eventually lead the charge to bring Bill down. If new evidence surfaces, Bill had better watch out. Sally may have the power to lock him up for a lengthy stint in prison.

Of course, Sally has a kind heart and she knows what it’s like to be given another chance. She was grateful to avoid jail time after she stole from Forrester Creations. It looks like Bill will avoid serious legal ramifications, but he’ll still pay the price. It’s going to take a lot of dough to rebuild Spectra Fashions and it’ll all come out of Bill’s pocket.

Bill will face major damage to his relationships as well as his reputation. His skyscraper should be scrapped, too. Bill could take a financial hit throughout all of this, which is certainly the best way to hurt him.

It probably won’t put much of a dent in Bill’s overall fortune, but it’s better than nothing! We’ll give you updates as other B&B details emerge. Stay tuned to the CBS soap and don’t forget to check CDL often for the latest Bold and the Beautiful spoilers, updates and news.