The Bold and the Beautiful Spoilers: Eric Falls Under Sheila’s Spell – Proven Right Again With Wyatt and Katie Affair 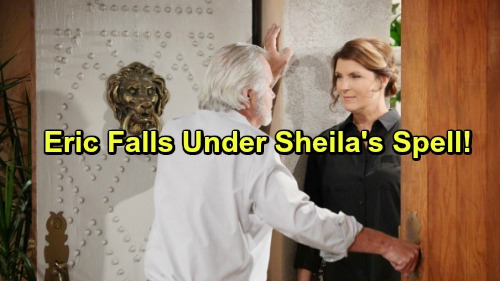 The Bold and the Beautiful spoilers tease that Sheila (Kimberlin Brown) will continue to insinuate herself in Eric’s (John McCook) life. Just weeks after being kicked out of the mansion by her former husband after again fighting with Quinn (Rena Sofer), Sheila happened to soapily see Katie (Heather Tom) and Wyatt (Darin Brooks) kissing at her new place of employment.

Sheila as a waitress is actually believable. Someone with nursing credentials, apparently as a RN (registered nurse), would surely work in a Los Angeles hospital, in a doctor’s office or for some type of medical facility. But because Sheila has committed many horrible crimes and was just released from prison, she’s unable to reenter her chosen profession. Sheila also certainly had her license revoked long ago as well.

So Miss Carter was taking orders at a trendy eatery in LA. The guy who appeared to be Sheila’s manager apparently conducted a weak employment screening. Oh, and trendy means that restaurant will be out of business in the future. Possibly, this waitress goes berserk and destroys this hot spot?

Katie and Wyatt, who can’t keep their hands off each other, arrived during one of Sheila’s shifts. Viewers were teased into believing that B&B’s returned villain was going to serve Watie (or Kwyatt, which is more creative in this scribe’s opinion). But she didn’t. The LA love birds decided the wait time was too much. They kissed rather extensively by the exit of this swanky outdoor establishment and then departed.

Shift to the Forrester mansion, where Eric just promoted Mateo (Francisco San Martin) to head his estate’s maintenance and security. Savvy soap viewers know that San Martin played Dario Hernandez on Days of our Lives in the early part of this decade. As viewers later saw, he’ll be linked to Sheila in the near future.

So Eric let Sheila in the door again after she rang the bell. He sized her up as she tattled to him about Katie and Wyatt’s stunning smooch. Then, Sheila added that she followed them to Katie’s place. Eric didn’t believe her tale, but went to Katie’s place and found her with Wyatt almost in the throes of, well, wink.

Once again Sheila was proven right. Eric didn’t want to believe it, but she was right about Quinn and Ridge (Thorsten Kaye) being involved behind his back, though it wasn’t an all-out affair.

Now, Sheila’s truth has been confirmed once more. Whether that raises Eric’s opinion of her and how Mateo comes to be used by the former Mrs. Forrester is yet to be determined. CDL is a leading source for everything linked to The Bold and the Beautiful. Check back regularly for B&B spoilers and news!